How to Clean Up the Pineal Gland 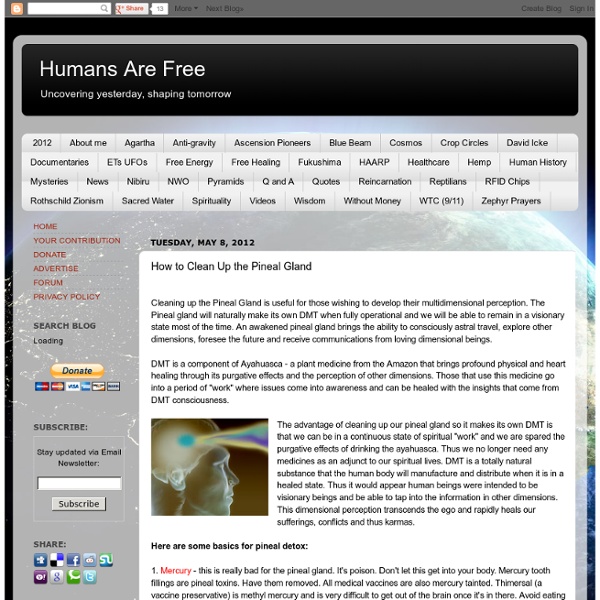 Let's unite in LOVE and meditation, NOW! I have the Solution! We are currently facing: -Chemtrails; -WWI deadly gas spread in the atmosphere and waters; -Fossil fuel addiction because they like it t... We are currently facing: -Chemtrails;-WWI deadly gas spread in the atmosphere and waters;-Fossil fuel addiction because they like it this way!-The seizure of the Internet piece by piece,-Militarized and Policed states;-Lab created diseases;-Deadly vaccines;-Chemical medicines that destroy our immunity;-Organic modified foods;-Big brother;-Corrupt leaders; -Fluoride in waters;-Chemicals in all foods and drinks;-Weapons of Mass Destruction;-Billions from our money spent for weapons each year (we don't have money for free treatments but we do have more WEAPONS??);-The big companies shake hands against us;-New wars again & again & again (99,99% of this planet doesn't WANT wars! Just a hand-full of people benefit from them. Those few thousands people placed in the top of the pyramid make fortunes from our misery).Do YOU want any of the above?

Expansion of Consciousness. DMT: The Spirit Molecule Dimethyltryptamine (DMT) is a naturally occurring hallucinogenic substance that appears in many plants all over the world and even the human body. Because DMT "is" the spirit molecule, it is the reason we dream and the source of having near death experience. Our bodies produce DMT in our sleep within our brain in the pineal gland, which is considered to be the third eye. Pharmaceutical-grade DMT is the gateway to a myriad trans-dimensional realms that hold the keys of mind-expansion and forbidden knowledge. Why is DMT illegal if it occurs naturally in everyone's brain? Think about this. Dr. Steve Jobs called LSD “one of the two or three most important things” he'd experienced. However, for decades, the U.S. government banned medical studies of the effects of LSD. “Governments don't want a population capable of critical thinking, they want obedient workers, people just smart enough to run the machines and just dumb enough to passively accept their situation.” Related Posts

“A Glimpse of the True Nature and High Potential of Chi power” “I am trying to keep an open mind. Can someone show a video clip of a Taichi Master throwing animals like a big dog or a bear? That will certainly convince me”.- therainbowsurf, top rated You Tube commentator From the YouTube video’s description: Ven Lama Dondrup Dorje, a renowned master, teacher of international champions who collected 370 gold medals from 1992 to 1998; here demonstates at the Fifth International Chinese Internal Arts Festival, England in 1996. From The Pathgate website: Qi is the Intrinsic Energy which sustains the configuration and integrity of all forms and substances in the Universe. I’ve always been amazed at the unbelievable claims made regarding “chi” energy. At the end of this video there are some suggestions from the world famous martial arts master George Dillman regarding advanced combat techniques which may help you defend yourself against a “chi” attack, should an assailant decide to use their incredible powers upon you! In summary these include: Footnotes:

Humans Are Free Ayahuasca Ayahuasca (UK: /ˌaɪ(j)əˈwæskə/, US: /-ˈwɑːskə/) or ayaguasca[1] (in Hispanicized spellings) from Quechua Ayawaska[2] (aya: soul, waska: vine), or yagé (/jɑːˈheɪ, jæ-/), is an entheogenic brew made out of Banisteriopsis caapi vine and other ingredients.[3] The brew is used as a traditional spiritual medicine in ceremonies among the indigenous peoples of the Amazon basin and is known by a number of different names (see below).[4] B. caapi contains several alkaloids that act as monoamine oxidase inhibitors (MAOIs). Another common ingredient in ayahuasca is the shrub Psychotria viridis which contains the primary psychoactive, dimethyltryptamine (DMT). MAOIs are required for DMT to be orally active.[5] Nomenclature[edit] Ayahuasca is known by many names throughout Northern South America and Brazil. Ayahuasca is the hispanicized spelling of a word in the Quechua languages, which are spoken in the Andean states of Ecuador, Bolivia, Peru, and Colombia. History[edit] Preparation[edit] DMT admixtures:

Chakras Chakras Chakra means Wheel in Sanskrit. Consciousness and energy move from one frequency to another in spiraling fashion. The body has energy centers that look like spinning wheels and are called Chakras. They allow energy to flow from one part of the body to another. As with all things in our reality, they are linked to sound, light and color. To heal, is to bring the chakras into alignment and balance then understand the nature of creation and your purpose in it. It's all in motion in the alchemy of time. Kundalini The Flow of Energy The Chakra Wheels Crown Chakra Brow Chakra Throat Chakra Heart Chakra Solar Plexus Spleen Chakra Root Chakra Chakras above the head bring one into higher frequency. They range from 4 fingers to one foot above the crown chakra. Chakras as Spiral Cones Third Eye Pineal Gland 12 Around 1 Spiraling Cones of Creation Chakra and Color Frequencies RED 1st Chakra: Base or Root Chakra: Kundalini: Root Chakra: Located at the base of the spine. Crystals are used with chakras 12 Around 1

Russian scientist: "Consciousness directly influences our world" Russian Scientist Unlocking the Mysteries of the Human Aura A Russian scientist is trying to convin... Russian Scientist Unlocking the Mysteries of the Human AuraA Russian scientist is trying to convince people they can change the world simply by using their own energy. He claims that thinking in a certain way can have a positive or negative effect on the surrounding environment. 'We are developing the idea that our consciousness is part of the material world and that with our consciousness we can directly influence our world,' said Dr. Konstantin Korotkov, a professor of physics at St. Petersburg State Technical University. To bridge our understanding of the unseen world of energy, scientific experiments are being carried out using a technique called bioelectrophotography. The assumption is that we are constantly emitting energy. 'It looks like an aura – but I don't like this word because it has some metaphysical meaning – I prefer the word 'energy field,' Korotkov told RT.

Dr. Sebi's Products Wild Mood Swings - Surf the web on a whim. (C) Sean McManus <p style="font-size:x-large;">Oh no! You don't have Javascript enabled. Please <a href=" Javascript now</a> or the only moods you'll experience will be boredom and frustration.</p><hr noshade> Pick your mood, click the button and Wild Mood Swings will open an appropriate website in a new window. What is Wild Mood Swings? It's a simple game and online web experience: you select a mood from the pull-down list, click on 'take me away' and it'll whisk you away to an appropriate site. Each time you reload the page or click the shuffle moods link, the moods are sorted into a different order, adding an additional element of serendipity. What do I need to work it? Some of the links will take you to sites that require the Flash plug-in or Chrome browser. If it's not working, it's possible you have a pop-up blocker installed that is stopping Wild Mood Swings from opening your destination site in a new window. Why was it developed? When was it launched?