Mapping Australia. History of Europe - The emergence of modern Europe, 1500–1648. Australian National Maritime Museum. Can you Keep Your Convicts Alive? 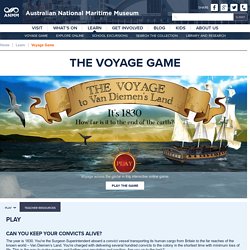 The year is 1830. The Voyages Of Discovery, State Library of NSW. Voyages of Discovery. 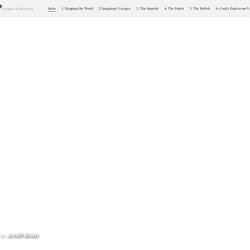 Age of Exploration. Australia on the Map. A Timeline of unveiling Australia to the world. 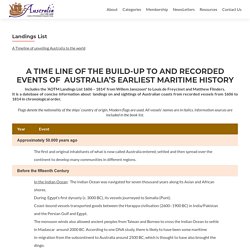 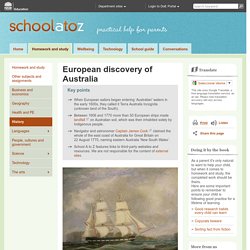 Between 1606 and 1770 more than 50 European ships made landfall on Australian soil, which was then inhabited solely by Indigenous people. Navigator and astronomer Captain James Cook claimed the whole of the east coast of Australia for Great Britain on 22 August 1770, naming eastern Australia 'New South Wales'. School A to Z features links to third-party websites and resources. Australian Explorers and Exploration. Dutch explorers - Australia's migration history timeline.

Map from the 15th century depicting Ptolemy’s description of the known world, 1482 engraving by Johannes Schnitzer. 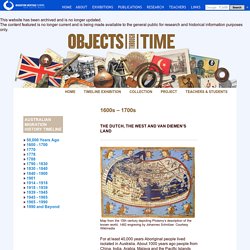 Courtesy Wikimedia For at least 40,000 years Aboriginal people lived isolated in Australia. About 1000 years ago people from China, India, Arabia, Malaya and the Pacific Islands started to explore the oceans around them. It is most likely that these sailors visited the north coast of Australia and traded with Aboriginal people. Before Time - Dutch explorers - My Place. For hundreds of years prior to the colonisation of Australia, there were many reports around the world of a great land mass situated to the south of Asia. 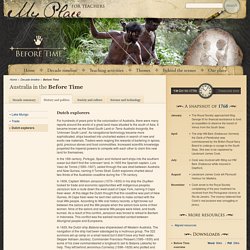 It became known as the Great South Land or Terra Australis Incognita, the 'Unknown South Land'. As navigational technology became more sophisticated, ships travelled into uncharted waters in search of new and exotic raw materials. Traders were reaping the rewards of bartering in spices, gold, precious stones and food commodities. Increased scientific knowledge propelled the imperial powers to compete with each other to claim this new land for themselves. In the 16th century, Portugal, Spain and Holland sent ships into the southern ocean but didn't find the 'unknown' land. The Spanish quest for Terra Australis. 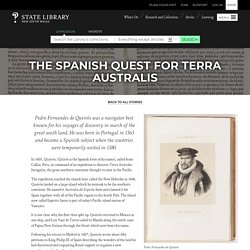 Y.M. instructs and commandsthe Council of the Indies to give me dispatches to my entire satisfaction, so that the Viceroy of Perú can give me whatever I need to populate the Southern Territories where Y.M. has sent me. I always considered it true that the claims about the peoples I discovered and are yet to be discovered, my good faith and just petitions, would reach pious ears and motivate Y.M.’s Christian disposition to the greatness of these two liberal favours I humbly accept, and I thank Y.M. infinitely. I promise to devote my life to serve such a great mission with the same love and truth as I have done so far. Sir, the greatest good or evil for those territories and peoples stem from a good or bad beginning. Meeting of the expeditions - VIDEO. 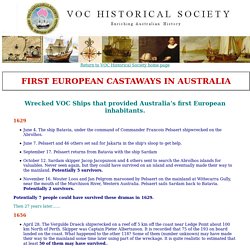 Potentially 7 people could have survived these dramas in 1629. As many 129 people may have survived this incident. June. The Zuytdorp, with a complement of 280 persons, was wrecked about 50 km north of the mouth of the Murchison River (Kalbarri). A considerable number survived and camped near where they were wrecked for some time. Conservatively 200 may have survived. April 26. Potentially 12 survivors. It seems therefore that between 1629 and 1727 - nearly 100 years - around 348 VOC crew and passengers could have spend some time on Australian soil trying to survive. How, and for how long, did they survive? Getting to know the locals - ABC Education. South Land to New Holland - Accidental Discoveries. Australia's West And South Coasts. 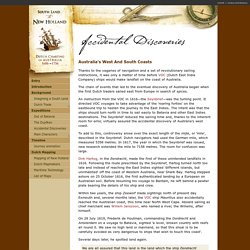 Voyages of Grand Discovery - About the Exhibition. This warning, however, did not prevent the loss of two Dutch East India Company ships in the Houtman Abrolhos some years later — Batavia in 1629 and Zeewijk in 1727. 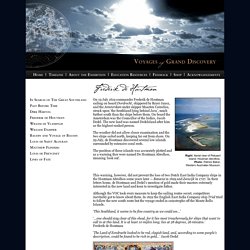 In their letters home, de Houtman and Dedel’s mention of gold made their masters extremely interested in the new land and keen to investigate futher. Although the VOC took every measure to keep the sailing routes secret, competitors inevitably got to know about them. Topography (links to ethnography, natural history etc.) - First Fleet artwork collection (click on 'gallery' to see more images. WA Museum Collections. VOC Historical Society - Voyages. Dutch Shipwrecks on the Western Australian Coastline. No direct evidence has ever been presented to validate the existence of a Dutch settlement at Palm Valley.

Did Aboriginal and Asian people trade before European settlement in Darwin? - Curious Darwin. Updated It's long been thought that Indigenous interactions with Europeans officially began after white settlement. Twelve Canoes - select Macassans. Before Time - Macassans - My Place. For thousands of years, Aboriginal clans across the continent traded with each other. Yolngu people from north-east Arnhem Land also traded with the Macassan people from Sulawesi (Indonesia) who were searching for trepang (bêche-de-mer, sea cucumber), which they valued as a medicine and as a food. In return for access to certain fishing areas, Yolngu people received from the Macassans goods such as cloth, tobacco, rice and knives. Trade with the Makasar. French in Australia.