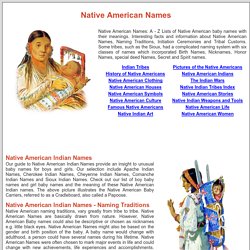 Native American Indian Names - No SurnamesThe Native Americans did not have surnames or family names. Picture of an Indian Village with Tepees. Stock 360 Panoramic Images and Videos for VR and More 360Cities. Blank Map of the United States - Free Printable Maps. Fourth Grade Social Studies Review Jeopardy Template. BRANCHES OF GOVERNMENT. Separation of Powers and Checks and Balances: Crash Course Government and Politics #3. WebQuest. Colonial Newspaper A WebQuest on the New England, Middle, & Southern Colonies Designed by Megan Ore ore7847@pacificu.edu Introduction | Task | Process | Evaluation | Conclusion | Credits | Teacher Page Introduction Did you know that the United States used to be divided up into 13 colonies and that those 13 colonies were divided up into three subgroups of colonies? 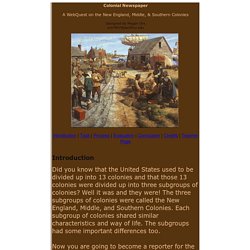 Now you are going to become a reporter for the Colonial Times! The Task Your task, as a reporter for the Colonial Times, is to give people from England as much information as you can on the three subgroups of colonies. For this task you will work individually, but it’s okay if you share information with friends, after all a good reporter uses all of their resources. Add anything else that you think people from England might want/need to know!

When you have finished researching you are going to make a Venn Diagram to display all of the information you have found. The Process Step 1: Start Researching! Evaluation Conclusion Great Job! The History of Colonial America. 13 Colonies Map Song. Grade 3 - Social Studies Georgia Standards of Excellence (GSE) Note: Social Studies Resources are developed and reviewed by #GAsocialstudies educators. 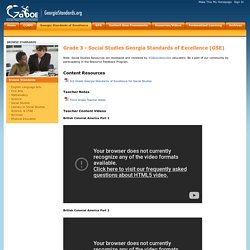 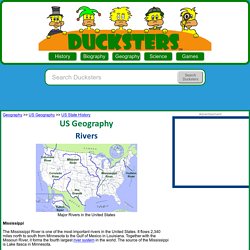 It flows 2,340 miles north to south from Minnesota to the Gulf of Mexico in Louisiana. Together with the Missouri River, it forms the fourth largest river system in the world. In the early history of the United States, the Mississippi River served as the westernmost border of the country until the Louisiana Territory was purchased from France in 1803. The Mississippi River travels through several states including Louisiana, Mississippi, Tennessee, Arkansas, Kentucky, Missouri, Illinois, Iowa, Wisconsin, and Minnesota. Missouri The Missouri River is the longest river in the United States at 2,540 miles long. The first explorers to travel the entire length of the Missouri River were Lewis and Clark. Rio Grande The Rio Grande flows 1,900 miles from Colorado to the Gulf of Mexico. Hudson Colorado Columbia Yukon River in Alaska. Where Did The First Americans Come From? U.S. Mountain Ranges. Worksheet Genius - your worksheet. Longitude and Latitude.