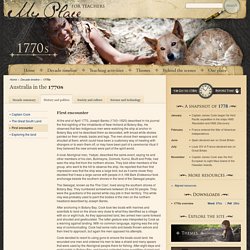 He observed that two Indigenous men were watching the ship at anchor in Botany Bay and he described them as decorated, with broad white strokes painted on their chests, backs and legs. The men shook their weapons and shouted at them, which could have been a customary way of meeting with strangers or to warn them off, or may have been part of a ceremonial ritual if they believed the new arrivals were part of the spirit world.

Early Contact. The encounter. Discover The first contact between Aboriginal people and colonists represented the clash of two fundamentally different cultures, each with their own set of rules. 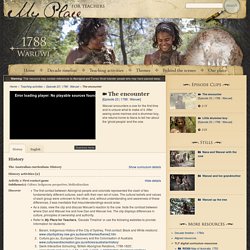 The cultural beliefs and values of each group were unknown to the other, and, without understanding and awareness of these differences, it was inevitable that misunderstandings would arise.As a class, view the clip and discuss Waruwi's reaction to the cow. Note the contrast between where Dan and Waruwi live and how Dan and Waruwi live. Twelve Canoes. The Rabbits Part 1. The Rabbits Part 2. Aboriginal people and the colony of NSW - Australian History, Colonisation. Aboriginal people and the colony of NSW is an excerpt from the documentary Rites of Passage the second episode of the two-part series entitled Rogue Nation, produced in 2009. 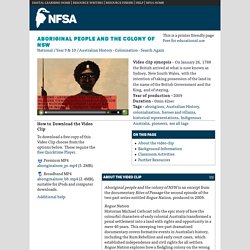 Rogue NationHistorian Michael Cathcart tells the epic story of how the colourful characters of early colonial Australia transformed a penal settlement into a land with rights and opportunity in a mere 40 years. This sweeping two-part dramatised documentary covers formative events in Australia’s history, including the Rum Rebellion and early court cases, which established independence and civil rights for all settlers. Rogue Nation explores how a fledgling colony on the wrong side of the globe was rapidly transformed from a place of punishment to a place of opportunity; a confident and prosperous community. 1780s - First attempt at communication (Bennelong) - My Place.

Almost a year after their arrival at Sydney Cove, Governor Arthur Phillip (1738–1814) and his officers had acquired very little knowledge about the Eora people. 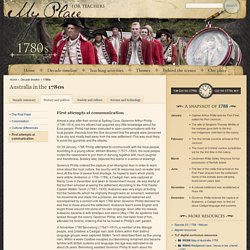 Phillip had been instructed to open communications with the local people. Records from the time document that the people were perceived to be shy and mostly kept away from the new settlement. Bennelong. Bennelong (1764? 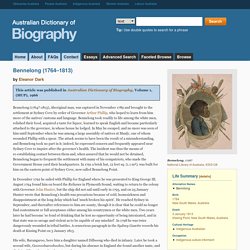 -1813), Aboriginal man, was captured in November 1789 and brought to the settlement at Sydney Cove by order of Governor Arthur Phillip, who hoped to learn from him more of the natives' customs and language. Bennelong took readily to life among the white men, relished their food, acquired a taste for liquor, learned to speak English and became particularly attached to the governor, in whose house he lodged. In May he escaped, and no more was seen of him until September when he was among a large assembly of natives at Manly, one of whom wounded Phillip with a spear. The attack seems to have been the result of a misunderstanding, and Bennelong took no part in it; indeed, he expressed concern and frequently appeared near Sydney Cove to inquire after the governor's health.

In December 1792 he sailed with Phillip for England where he was presented to King George III. His wife, Barangaroo, bore him a daughter named Dilboong who died in infancy. Citation details. Pemulwuy. Pemulwuy (c.1750–1802), Aboriginal warrior, was born near what was later named Botany Bay, on the northern side of the Georges River, New South Wales. 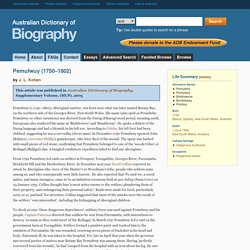 His name (also spelt as Pemulwhy, Pemulwoy or other variations) was derived from the Darug (Dharug) word pemul, meaning earth. Europeans also rendered his name as 'Bimblewove' and 'Bumbleway'. He spoke a dialect of the Darug language and had a blemish in his left eye. According to Colebe, his left foot had been clubbed, suggesting he was a carradhy (clever man). In December 1790 Pemulwuy speared John McIntyre, Governor Phillip's gamekeeper, who later died of the wound. Interactions between Europeans and Aboriginal Tasmanians - History (4,5) 1780s - Cultural differences - My Place. On 26 January 1788, the British government through Governor Arthur Phillip (1738–1814) claimed sovereignty over the area that Captain James Cook had named New South Wales. 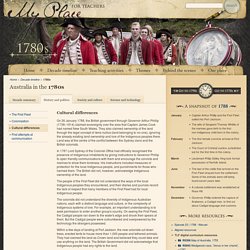 They also claimed ownership of the land through the legal concept of terra nullius (land belonging to no-one), ignoring the already existing land ownership and lore of the Indigenous peoples there. Land was at the centre of the conflict between the Sydney clans and the British colonists. In 1787 Lord Sydney of the Colonial Office had officially recognised the presence of Indigenous inhabitants by giving instructions to Governor Phillip to open friendly communications with them and encourage the convicts and marines to show them kindness.

His instructions included measures of protection for the local Indigenous people, and punishments for those who harmed them.