Why Interest in Virtual Worlds for Online Collaboration Is Spiking. By now, it’s well known that usage of video-conferencing software like Zoom has exploded as a result of the Covid-19 shutdown. 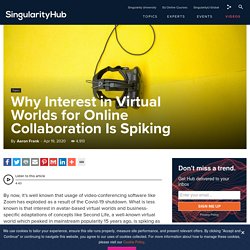 What is less known is that interest in avatar-based virtual worlds and business-specific adaptations of concepts like Second Life, a well-known virtual world which peaked in mainstream popularity 15 years ago, is spiking as well. “Yes, we’ve been getting a ton of inquiries,” said Philip Rosedale in an email to Singularity Hub. Rosedale is CEO and cofounder of High Fidelity, a software company currently building a new kind of virtual world that’s not yet been released.

He’s also the creator and founder of Second Life and said it is seeing a surge in use as well. “This is a strange moment for VR, virtual worlds, and the internet more generally. This point was underscored last week in an opinion article for the Wall Street Journal where Stanford professor Jeremy Bailenson outlined why video conferencing on Zoom can feel so exhausting. Harnessing the power of virtual reality to reduce social isolation amid a global pandemic - Marketplace - McKnight's Long Term Care News. As COVID-19, or coronavirus, continues to spread across our country, the Centers for Disease Control and Prevention (CDC) has advised “social distancing” and that those who are deemed higher-risk persons “avoid crowds” and “stay home” to further reduce your risk of being exposed. 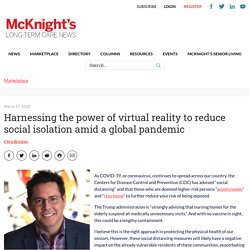 The Trump administration is “strongly advising that nursing homes for the elderly suspend all medically unnecessary visits.” And with no vaccine in sight, this could be a lengthy containment. I believe this is the right approach in protecting the physical health of our seniors. However, these social distancing measures will likely have a negative impact on the already vulnerable residents of these communities, exacerbating feelings of loneliness, and potentially causing isolation-induced depression.

Depression, especially for the elderly, “can be especially hard and even dangerous,” according to Susan London, LMSW, director of social work at Shore View Nursing and Rehabilitation Center. According to Dr. I tried Facebook’s vision for the social future of VR, and it’s full of question marks. I get used to my new virtual face and virtual body, crisp and clean and legless. 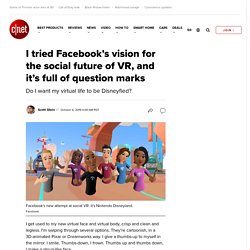 I'm swiping through several options. They're cartoonish, in a 3D-animated Pixar or Dreamworks way. I give a thumbs-up to myself in the mirror. I smile. Thumbs-down, I frown. I'm wearing Facebook's recently released Oculus Quest VR headset, but I'm trying an experience that won't launch until early next year. I'm inside a demo of a beta coming next year for a select group of Facebook's Oculus VR audience. I've been down this road before: I remember connecting in chats with far-off people in Spaces, and playing board games and watching TV in Rooms, and joining people for live video streams in Venues. Build your own Battle Bots I zap over to a teleport pad, and whoosh, we're off to a robot battle chamber. I'm reminded of so many things, playing with Horizon: cartoonish and ridiculous VR games like Vacation Simulator and Virtual Virtual Reality. Will it all be Disneyfied? What about privacy, or moderation? AI will transform religion with robot priests like this one.

A new priest named Mindar is holding forth at Kodaiji, a 400-year-old Buddhist temple in Kyoto, Japan. 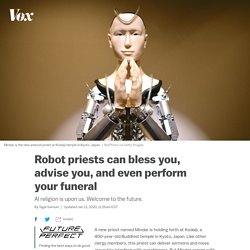 Like other clergy members, this priest can deliver sermons and move around to interface with worshippers. But Mindar comes with some ... unusual traits. A body made of aluminum and silicone, for starters. Mindar is a robot. Designed to look like Kannon, the Buddhist deity of mercy, the $1 million machine is an attempt to reignite people’s passion for their faith in a country where religious affiliation is on the decline. For now, Mindar is not AI-powered. “This robot will never die; it will just keep updating itself and evolving,” said Tensho Goto, the temple’s chief steward. Robots are changing other religions, too. Then there’s SanTO — short for Sanctified Theomorphic Operator — a 17-inch-tall robot reminiscent of figurines of Catholic saints. Roboticist Gabriele Trovato designed SanTO to offer spiritual succor to elderly people whose mobility and social contact may be limited. Seeing is believing: PwC.