Germany social assistance policy looks like basic income - Business Insider. Unemployed people in Germany have been eligible to receive monthly payments from the government since 2005. 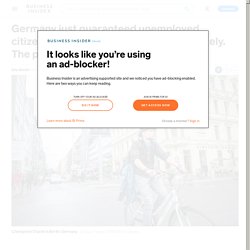 But the payments could be suspended if individuals didn't actively search for work.Last month, the German supreme court ruled that the policy was unconstitutional.It instated new regulations that guarantee a minimum payment of 300 euros ($333) per month for unemployed residents.Some consider this the world's newest example of a basic-income policy.Visit Business Insider's homepage for more stories.

For about 15 years, Germany offered a social assistance benefit that was widely considered the opposite of basic income. Any single, adult German resident who could not make ends meet based on their income and personal assets (or with assistance from relatives) was eligible to receive around 424 euros ($470) per month to cover food and basic necessities. Children in the ancient Middle East were valued and vulnerable — not unlike children today. The choices that societies make concerning the treatment of children can bring about the greatest of debates and prompt significant political action. 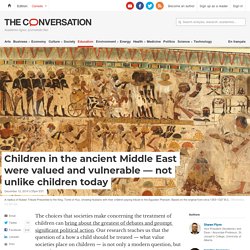 Our research teaches us that the question of a how a child should be treated — what value societies place on children — is not only a modern question, but an ancient one. As historians whose work is related to understanding the texts of the Hebrew Bible and the world it was written in, we trace clues to understand the lives of children over 3,000 years ago. Through data from archaeology, letters, contracts, laws, material culture, ancient stories and religious practices, we study the children in the ancient lands of the Middle East, in the region now encompassing Egypt, Israel and the West Bank, Lebanon, Syria, Iraq, Iran and Turkey.

If in doubt, let them out — children have the right to play. New research from Statistics Canada’s Canadian Health Measures Survey reaffirmed the dramatic decline in Canadian children’s fitness seen over the past 35 years — with only one-third of Canadian school-aged children meeting physical activity guidelines. 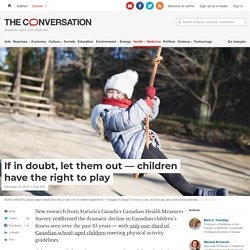 Other research from the same survey showed that physical activity increases when children are outdoors. Each additional hour spent outdoors per day is associated with seven more minutes of moderate-to-vigorous physical activity, 762 more steps and 13 fewer minutes of sedentary time. Conspiracy theories: how belief is rooted in evolution – not ignorance. Despite creative efforts to tackle it, belief in conspiracy theories, alternative facts and fake news show no sign of abating. 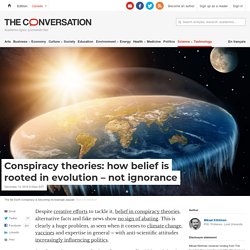 This is clearly a huge problem, as seen when it comes to climate change, vaccines and expertise in general – with anti-scientific attitudes increasingly influencing politics. So why can’t we stop such views from spreading? My opinion is that we have failed to understand their root causes, often assuming it is down to ignorance.

Conspiracy theories: how belief is rooted in evolution – not ignorance. Brands are getting more “woke.” Who actually benefits? Skateboarding, mountain biking, and downhill street luge all pale in comparison to the extreme sport that is trying to change your pad in the stall of a public men’s restroom. 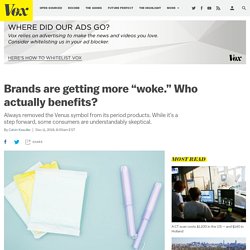 Men’s room stalls never come equipped with the little metal trash cans they offer in women’s restrooms to toss out your used hygiene products, so from the get you’re probably executing half of the maneuver one-handed, with the other hand holding your trash. This complicates the other objective of trying to move through this process as silently as possible, lest you alert anyone else in the bathroom that you’re committing Gender Deviance — but the crinkle of pad packaging being unwrapped in a public restroom booms at about 150 decibels, so you become certain everyone can hear you and knows there’s a trans person in the stall. None of this is great! And yet, when a mass-market producer of sanitary pads scrapped its hyper-feminized packaging, something felt slightly off. What artificial intelligence doesn’t understand. What kind of relationship will you have with your AI? - By. How do you actually become friends with someone? 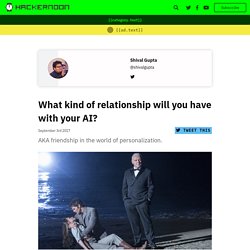 Is it a slow process of getting to know each other or an instant moment, when you just hit it off? Do we enjoy staying friends with people that have become part of our lives or sometimes, with distance, we just let them go? I was Facebook-friends with this girl Claire when I was in college and we used to discuss sci-fi movies together. Though we’ve lost touch, I miss the friendship we had developed over a very specific topic of conversation — sci-fi movies. This AI can predict how long your relationship will last. Unless you’re watching Her, you don’t generally connect AI with romantic angst. 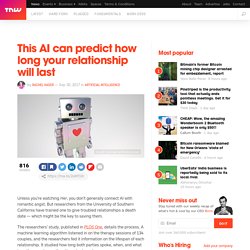 But researchers from the University of Southern California have trained one to give troubled relationships a death date — which might be the key to saving them. The researchers’ study, published in PLOS One, details the process. AI: How Human-Machine Collaboration Will Shape the Workforce - By. The impact of technology on the workforce is nothing new. 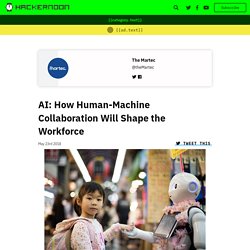 Many of the jobs that young professionals do today didn’t exist when their parents entered the job market. Likewise, the workers of the future will be entering fields that don’t yet exist. One of the major driving forces behind change in the workplaces of tomorrow is artificial intelligence (AI). In an age when machines will start having capabilities greater than the human mind (at least in some respects), business success will increasingly depend on leveraging AI to drive efficiencies and innovation.

But what does this mean for employees and businesses? How one town fostered resilience by combating loneliness. Sponsored: ‘A house is just the first step’ After an accident left her severely injured, Valerie spent months living in her car, feeling isolated and alone. 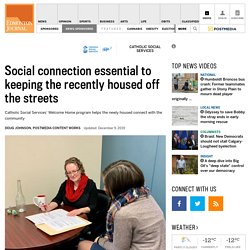 Eventually she was able to secure housing, but that didn’t end the negative thoughts. “I just felt like I had nothing…I was an isolated person,” she says. “I didn’t go out, I didn’t do anything, I didn’t know anybody. I was in a depression.” Vancouver's 'symbol of disparity': a $4.8-million chandelier. The 3,400 kg chandelier had been affixed days earlier by a web of thin metal cables to the underside of Vancouver’s Granville St. 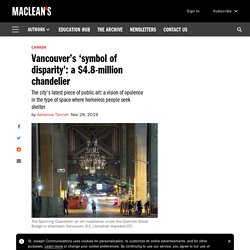 Bridge, a space that has long been an unwelcoming dead zone. Despite its heft, the translucent sculpture looks ethereal against the towering cement bridge supports. A crowd had gathered, not so much to hear renowned Vancouver conceptual artist Rodney Graham thank Isaac Newton for inspiring the piece he calls Spinning Chandelier, developer Ian Gillespie who bankrolled the $4.8 million sculpture or the many crafts people at the artists’ foundry in Walla Walla, Wash. who constructed it from more than 600 polyurethane crystals and stainless steel. The End of Babies. In the fall of 2015, a rash of posters appeared around Copenhagen. One, in pink letters laid over an image of chicken eggs, asked, “Have you counted your eggs today?”

A second — a blue-tinted close-up of human sperm — inquired, “Do they swim too slow?” The posters, part of a campaign funded by the city to remind young Danes of the quiet ticking of their biological clocks, were not universally appreciated. They drew criticism for equating women with breeding farm animals. The timing, too, was clumsy: For some, encouraging Danes to make more babies while television news programs showed Syrian refugees trudging through Europe carried an inadvertent whiff of ugly nativism.

Dr. But the campaign also notably failed to land with some of its prime targets, including Dr. From depression to Parkinson's disease: The healing power of dance. Call for new public holiday to address mental health at work. 'Ghosting': The creepy new HR trend. Deliveroo riders on a mission to find missing persons. What Don Cherry, Canada’s Archie Bunker, shows us about cancel culture. Don Cherry’s recent Archie Bunker-inspired tirade revealed an alienating view of new and, by implication, racialized Canadians.

Cherry inflamed the Canadian culture wars revealing deep ruptures in Canada’s social landscape we can’t seem to bridge. The work of Harvard University professor Robert Putnam can help us understand the implications of what the Cherry fiasco unveiled. Putnam argued that Americans are less civic minded and socially connected compared to generations past. He highlights a myriad of reasons for this such as generational differences, demographic shifts, the rise of individualized media, suburbanization and urban sprawl, which have resulted in longer commutes, growing time constraints, and greater class and racial neighbourhood segregation. He also says economic decline and restructuring have left people with less money for social activities.

Will virtual and augmented reality move us into the knowledge age? Highlights: Addressing fairness in the context of artificial intelligence. When society uses artificial intelligence (AI) to help build judgments about individuals, fairness and equity are critical considerations. Building social capital in remote teams. Remote teams rely on trust forming a framework that allows communication to flow freely. Grinnell students launch new social-networking app - The Scarlet and Black. Virtual reality would make attending therapy easier for stroke survivors. Researchers have created a virtual reality clinic to make it easier for stroke survivors to attend their physical and occupational therapy sessions. Results from a proof-of-concept study suggest that the technology - and the social connection it facilitates - are effective at encouraging therapy participation.

"Physical and occupational therapy are important parts of stroke recovery, in terms of helping survivors regain dexterity and functional motor ability," says Derek Kamper, co-author of a paper on the work. "However, stroke survivors often face significant challenges in attending their therapy sessions. For example, many survivors don't live near facilities that offer relevant therapy services. Will virtual and augmented reality move us into the knowledge age? Evolve 2018: AR, VR, & the Future of Work. Nature versus nurture: how modern science is rewriting it. The question of whether it is genes or environment that largely shapes human behaviour has been debated for centuries. During the second half of the 20th century, there were two camps of scientists – each believing that nature or nurture, respectively, was exclusively at play.

This view is becoming increasingly rare, as research is demonstrating that genes and environment are actually interconnected and can amplify one another. AIA Practice and Design Conference: Designing for a Healthy Future. More People Than Ever Are Eating Alone, and It’s Making Everyone Nervous. Remote working: Is it as good as we think? The Return of Multigenerational Housing In Expensive Metro Regions. Alum wins $10,000 grand prize in accessible design competition. Being Alone Much of the Time Makes People Feel Neglected by their Social Environment New Israeli Study Shows - Breaking Israel News.

‘Normalize it’: How to discuss adoption, donor conception with your child. Get to Know Your Data Double! – PRIO Blogs. Data Self, Data Double by Amanda Schwarz on Prezi. Ride-sharing was supposed to make traffic better. It's making it worse. Scientists play Fortnite to teach us about climate change. 'Digisexuality' emerges as a new sexual identity. We trust our virtual assistants more than we should. Machine consciousness is 'hugely problematic,' says Ian McEwan. Learning by Explaining to a Digital Doppelganger. From Robot to Virtual Doppelganger: Impact of Visual Fidelity of Avatars Controlled in Third-Person Perspective on Embodiment and Behavior in Immersive Virtual Environments. Digital Age: Effect of digitisation on careers. Framingham schools add an 'A' - for arts - to STEM week - News - Wicked Local - Boston, MA. Data Self, Data Double by Amanda Schwarz on Prezi. Will VR assist us in enrolling others in the learner-centered paradigm?

For Employers - Fertility Challenges and Your Employees. What universities can do to keep students from dropping out. Why College Campuses Need a “Pride and Prejudice” Approach to Inclusion. Expertise in the Age of YouTube. Intro to Happiness: Yale Professor Laurie Santos Brings Popular Course to Podcast. Announcing the release: Foundational Approaches to Gender Equity in Tech on the Hugo Blog. AI Alignment Podcast: Human Compatible: Artificial Intelligence and the Problem of Control with Stuart Russell. Synthetic Speech Generated from Brain Recordings. Instagram is shutting down a creepy app that lets you stalk loved ones. How remote working can increase stress and reduce well-being. More than 175 musicians pledge to boycott Amazon festivals and partnerships until they cancel ICE contracts - CloudTweaks.