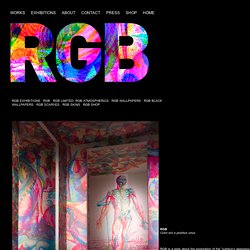 RGB designs create surfaces that mutate and interact with different chromatic stimulus. Carnovsky's RGB is an ongoing project that experiments with the interaction between printed and light colours. The resulting images are unexpected and disorienting. The colors mix up, the lines and shapes entwine becoming oneiric and not completely clear. 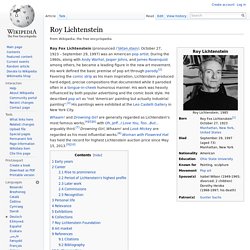 During the 1960s, along with Andy Warhol, Jasper Johns, and James Rosenquist among others, he became a leading figure in the new art movement. His work defined the basic premise of pop art through parody.[2] Favoring the comic strip as his main inspiration, Lichtenstein produced hard-edged, precise compositions that documented while it parodied often in a tongue-in-cheek humorous manner. His work was heavily influenced by both popular advertising and the comic book style. He described pop art as "not 'American' painting but actually industrial painting".[3] His paintings were exhibited at the Leo Castelli Gallery in New York City.

Whaam! Early years[edit] Career[edit] Room XX by miquel barceló - the spanish artist's colourful ceiling installation at the UN in geneva. PK11 12 Wedha Abdul Rasyid. Zaria Forman. Fire Pit Art - Functional Steel Sculpture. Holtonrower.com. Designboom. Jan 18, 2013 performance architecture construction with clothes by dantiope performance architecture – construction with clothes by dantiopeintervention 01 ‘performance architecture‘ is conceived as an international ideas competition aimed at choosing proposals for five temporary urban interventions in public spaces featured as controversial by the citizens. the installations intend to draw up architectural and urban strategies that, by reviving performance art approaches, provide new directions as to the roles of architects, artists and designers – while promoting alternative urban practices to the construction of monuments and other traditional structures by facilities, activities and happenings. 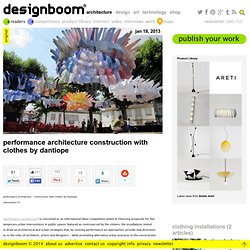 Designboom. Oct 26, 2012 mirrored room of infinite reflections by thilo frank ‘the phoenix is closer than it appears’ by thilo frankinstallation view, kunsten, museum of modern art, aalborg, denmark, 2011image © studio thilo frank german artist thilo frank has sent designboom images of his project ’the phoenix is closer than it appears’, a large mirror installation that appears to merge into the surrounding space. by revealing a perfectly euclidical core, the visitor becomes the spatial focal point by moving on a swing through the vivid conceived environment. despite its large dimensionality (4 x 4 x 8 m), it creates a disorientating moment where the surrounding room translates a physical reflection, translating the viewer’s body into an imaginary reflection. 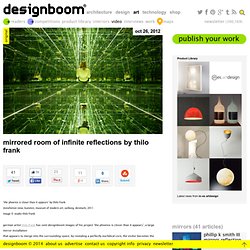 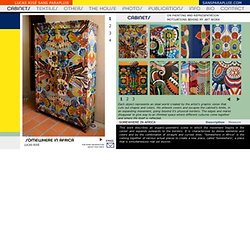 The representations go through an abstract mechanism and are combined randomly, allowing me to create new ideal worlds captured on wood. Each art piece presents fantasy spaces, many times dreamed of and in some way attained through the material concretion. In other words: the quest for an earthly representation of my idea of heaven. This imagery is made up of physical, sensory and cultural representations. The different physical scenarios refer to joyous rituals: carnivals, fairs, and the circus, with their distinctive characters and movements. Working with a dimensional medium results from a desire of achieving a different aesthetic experience. Each object represents an ideal world created by the artist’s graphic vision that cuts out shapes and colors. Famous T-Shirt Designers of All-time. A blog about art and visual ingenuity. We are two contemporary artists working in Kuwait. 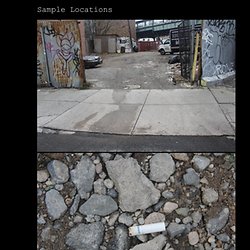 Born in Larache, Morocco, in 1961, Hassan Hajjaj left Morocco for London at an early age. 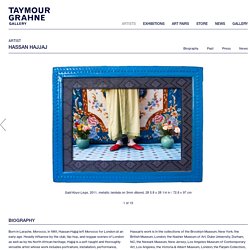 Heavily influence by the club, hip-hop, and reggae scenes of London as well as by his North African heritage, Hajjaj is a self-taught and thoroughly versatile artist whose work includes portraiture, installation, performance, fashion, and interior design, including furniture made from recycled utilitarian objects from North Africa, such as upturned Coca-Cola crates as stools and aluminum cans turned into lamps. Turning to photography in the late 80s, Hajjaj is a master portraitist, taking studio portraits of friends, musicians, and artists, as well as strangers from the streets of Marrakech, often wearing clothes designed by the artist. Past exhibition 28 January - 8 March 2014 Press Hassan Hajjaj's Rock Stars January - February 2016 The Art Market: Miami sobers up for business 4 December 2015 10 of the Best Artworks at the Untitled Art Fair 2015 2 December 2015 1 December 2015 Morocco’s Andy Warhol July 2015.

Peter Anton. Designboom. Oct 26, 2012 k architectures: théâtre of saint nazaire ‘théâtre of saint-nazaire’ by k-architectures, saint-nazaire, france image © patrick miara all images courtesy of k-architectures paris-based k-architectures have recently completed the ‘théâtre of saint-nazaire’ in saint-nazaire, france, adjacent to remnants of a neoclassical train station destroyed in world war II. the monolithic forms takes cues from a nearby bunker and the concrete surface is stamped with a perforated floral pattern derived from motifs of 17th century silk textiles. at night, a soft glow emanates through the 11.5 meter tall walls, breaking down the appearance of the exterior’s massing. a main auditorium is placed within the concrete building and flanked by the hall, rehearsal area, dressing room. the facades enclosing these spaces are chestnut planks which evoke the stacks of racking found on industrial sites and processes. approach to theater image © patrick miara. 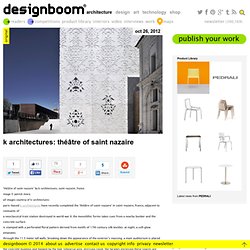 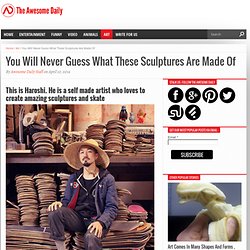 He is a self made artist who loves to create amazing sculptures and skate One day he had the genius idea of combining the two things he love the most in the world.