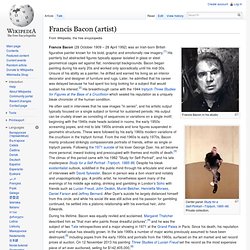 Bacon began painting during his early 20s and worked only sporadically until his mid-30s. Unsure of his ability as a painter, he drifted and earned his living as an interior decorator and designer of furniture and rugs. Later, he admitted that his career was delayed because he had spent too long looking for a subject that would sustain his interest.[2] His breakthrough came with the 1944 triptych Three Studies for Figures at the Base of a Crucifixion which sealed his reputation as a uniquely bleak chronicler of the human condition.

During his lifetime, Bacon was equally reviled and acclaimed. Bacon's birthplace at 63 Lower Baggot Street, Dublin. Eadweard Muybridge. In 1874 he shot and killed Major Harry Larkyns, his wife's lover, but was acquitted in a jury trial on the grounds of justifiable homicide.[3] He travelled for more than a year in Central America on a photographic expedition in 1875. 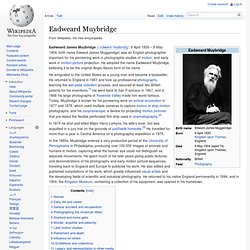 In the 1880s, Muybridge entered a very productive period at the University of Pennsylvania in Philadelphia, producing over 100,000 images of animals and humans in motion, capturing what the human eye could not distinguish as separate movements. He spent much of his later years giving public lectures and demonstrations of his photography and early motion picture sequences, traveling back to England and Europe to publicise his work. He also edited and published compilations of his work, which greatly influenced visual artists and the developing fields of scientific and industrial photography. He returned to his native England permanently in 1894, and in 1904, the Kingston Museum, containing a collection of his equipment, was opened in his hometown.

This California Central coast scene gave me the opportunity to paint both. Interested in this painting? Pt. March 26th, 2014 “Pt. The lighthouse at Pt. There are a multitude of tide pools near by – great for exploring. Interested in this painting? See more of my seascapes here Eaton Canyon Stream – California landscape painting March 21st, 2014 “Eaton Canyon Stream” 9 x 12 oil painting In the years when we have heavy rain, the stream coming out of Eaton Canyon is full and fast-flowing. This view of the stream is looking south, from the east side of the canyon. See more Pasadena area paintings here Canyon harmony – California Eaton Canyon landscape impressionist oil painting March 19th, 2014 Canyon Harmony 9 x 12 original oil painting on canvas Available March 9th, 2014. A hectic world of art. Toby Ng Design. Alfred Gilbert. The figure of Anteros from the Shaftesbury Memorial in Piccadilly Circus Sir Alfred Gilbert (12 August 1854 – 4 November 1934) was an English sculptor and goldsmith who enthusiastically experimented with metallurgical innovations. 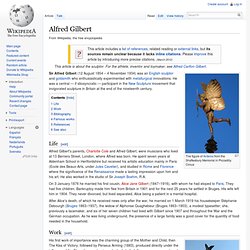 He was a central — if idiosyncratic — participant in the New Sculpture movement that invigorated sculpture in Britain at the end of the nineteenth century. Life[edit] Alfred Gilbert's parents, Charlotte Cole and Alfred Gilbert, were musicians who lived at 13 Berners Street, London, where Alfred was born. Francis Leggatt Chantrey. Sir Francis Leg(g)att Chantrey (7 April 1781 – 25 November 1841) was an English sculptor. 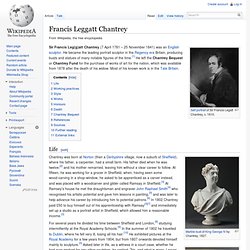 He became the leading portrait sculptor in the Regency era Britain, producing busts and statues of many notable figures of the time.[1] He left the Chantrey Bequest or Chantrey Fund for the purchase of works of art for the nation, which was available from 1878 after the death of his widow. Most of his known work is in the Tate Britain. Life[edit] Chantrey was born at Norton (then a Derbyshire village, now a suburb of Sheffield), where his father, a carpenter, had a small farm.

His father died when he was twelve;[2] and his mother remarried, leaving him without a clear career to follow. John Flaxman. John Flaxman R.A. (6 July 1755 – 7 December 1826) was a British sculptor and draughtsman, and a leading figure in British and European Neoclassicism. 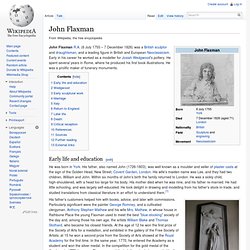