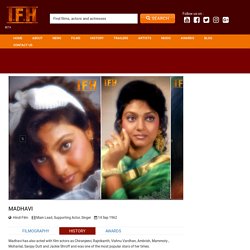 Madhavi did her debut in the films with K. Raghava and Dasari Narayana Rao’s Thoorpu Padamara a film in Telugu when she was still in her teens. Followed by this film it was a whirlwind of activities for her with new roles coming her way and not before long she had acted in Telugu, Tamil, Kannada, Malayalam and Hindi , Oriya and Bengali with some of the top actors and directors. She enjoyed her profession as a film actress and has gained profound experience with each of her roles that varied from each film.

It was one of the best period of her life time and she calls it the Golden period of her life. K. She also played the role of Zeenat Aman from Insaaf Ka Tarazu for the Telugu remake called the Edi Dharmam Edi Nyayam in 1982 . Man Ka Meet 1968. Saas Bhi Kabhi Bahu Thi 1970. Humjoli 1970. Mamata Ki Chhaon Mein 1989. Leena Chandavarkar. She made her debut in the film, ' Man ki Meet' with Sunil Dutt and it was his wife Nargis who groomed her to be an actress. 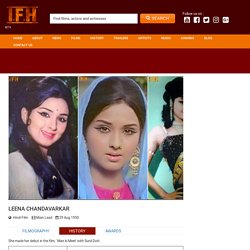 Since then she has about 30 to 35 films to her credit and was a popular actress of her times. Between 1969 to 1979, Leena Chandavarkar she was a starcast opposite to many popular heros of that Era. She gave her best performance in the film Mehboob Ki Mehndi opposite to Rajesh Khanna in 1971 . Her film 'Manchali' opposite to Sanjeev Kumar was a hit film loved by the masses for the song compositions .

Bairaag is another good film where she acted with the great screen legend, Dilip Kumar with a starcast of Saira Banu, Prem Chopra and Helen. Admist a stiff competition, Leena's achievements are quite significant. She was in the news for wrong reasons, quite recently in 2015 much after she had quit the film industry. Leena Chandavarkar is in tune with the family close to Kishore Kumar;s family and is keen to see Amit and Sumeet make a great music together . Parth Bhalerao. Sanjay Khapre. Sachin Purohit.