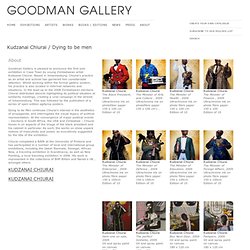 Based in Johannesburg, Chiurai’s practice as an artist and activist has garnered him considerable attention. Whilst working within the formal gallery system, his practice is also located in informal networks and situations. In the lead-up to the 2008 Zimbabwean elections Chiurai distributed stencils highlighting its political situation at solidarity meetings, creating a viral campaign in the streets of Johannesburg. This was followed by the publication of a series of open edition agitprop posters.

Dying to be Men continues Chiurai’s interest in the aesthetics of propaganda, and interrogates the visual legacy of political representation. Mail & Guardian 200 young South Africans. For a man of few words, Kudzanai Chiurai is not afraid to speak his mind - which he does, loudly and brilliantly, through his art. 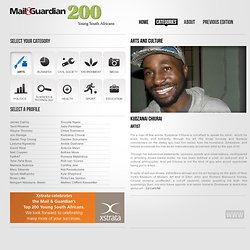 His brutal honesty and fearless commentary on the status quo had him exiled from his homeland, Zimbabwe, and helped accelerate his rise as an internationally acclaimed artist by the age of 30. Through his subversive statements, opinions, spoofs and observations, multilayered in arresting mixed-media works, he has been dubbed a poet, an anti-poet and a cultural philosopher. And yet Chiurai is not the kind of guy who would appreciate being put in a box. In spite of sell-out shows, exhibitions abroad and his art hanging on the walls of New York's Museum of Modern Art and in Elton John and Richard Branson's homes, Chiurai remains unaffected: a cut-off observer, clearly speaking his truth. Not surprisingly then, his only future agenda is to return home to Zimbabwe to teach kids about art. - Lu Larché. Kudzanai Chiurai considers the nature of violence. If we started out by apprehending what we see in the media through Kudzanai Chiurai’s 16SNLV, rather than the other way around, I think we would better grasp the nature of a violence-soaked world. 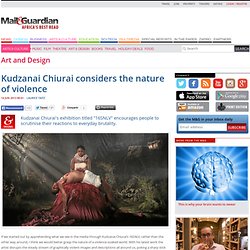 With his latest work the artist disrupts the steady stream of graphically violent images and descriptions all around us, poking a sharp stick into how society increasingly shuts down in response to public violence. 16SNLV (a film classification defining the age at which it is permissible to be exposed to sex, nudity, [coarse] language and violence) takes on issues of violence and mourning in the public realm.

The exhibition’s centrepiece is a video of a woman singing a dirge, the beauty of the funeral song a counterpoint to the image of her gently washing the bloodied and broken body before her. It is a woman’s body that is being washed. Chiurai made two versions of the video. ASHA ZERO INTERVIEW. When did you first realise that you were going to be an artist? 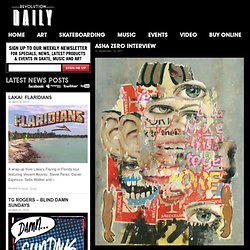 I guess the possibility of it started during my high school years, art was pretty much the only subject I was really interested in, so that led me in the graphic design direction as a possible career. I was fortunate enough to be able to pursue it at tertiary level, where I decided to ditch design and continue a major in fine art.

I only really got going a couple of years after art school though. What do you enjoy most about working in collage? Well… I don’t work in collage, I work with the idea of collage. How would you describe your art to someone who doesn’t know anything about art? Who or what influences your work? Take us through your typical creative process for when you make art. Are there any central themes that run through your work? Asha Zero, Meaning in Pieces. Asha Zero is an artistic avatar crafted beyond the confines of gender, age and race so that the artworks can speak for themselves uninhibited. 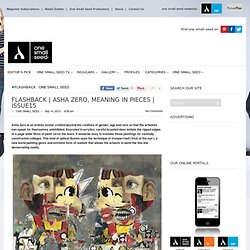 Executed in acrylics, careful brushstrokes imitate the ripped edges of a page while flicks of paint carve the tears. It would be easy to mistake these paintings for carefully constructed collages. This kind of optical illusion uses the technique of trompe-l’oeil (‘trick of the eye’), a new world painting genre and extreme form of realism that allows the artwork to bend the fine line demarcating reality. Mouse over text (2008) A marriage of Abstraction and Realism, Asha’s paintings appear discordant at first. What happens in our current society, especially with the social networking phenomenon, is that you have this virtual identity, explains Asha. Assorted bystander (no2) Combining skill with enjoyment, Asha creates a mode of painting that dissolves the boundary between fine art and the everyman’s creative expression. 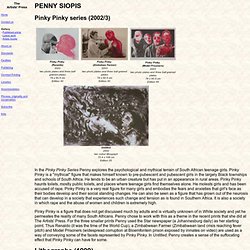 Pinky Pinky is a ''mythical" figure that makes himself known to pre-pubescent and pubescent girls in the largely Black townships and schools of South Africa. He tends to be an urban creature but has put in an appearance in rural areas. Pinky Pinky haunts toilets, mostly public toilets, and places where teenage girls find themselves alone.