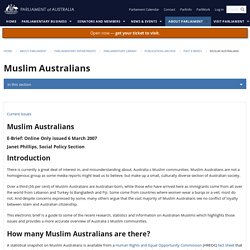 Over a third (36 per cent) of Muslim Australians are Australian-born, while those who have arrived here as immigrants come from all over the world from Lebanon and Turkey to Bangladesh and Fiji. This electronic brief is a guide to some of the recent research, statistics and information on Australian Muslims which highlights those issues and provides a more accurate overview of Australia s Muslim communities. How many Muslim Australians are there? A statistical snapshot on Muslim Australians is available from a Human Rights and Equal Opportunity Commission (HREOC) fact sheet that includes unpublished 2001 Census data on birthplace, ancestry, sex and geographic distribution in Australia. Major countries of birth of Muslim Australians Citizenship Back to top Key links. 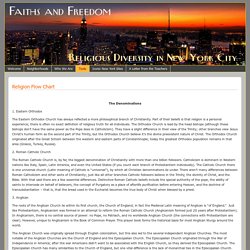 Eastern Orthodox The Eastern Orthodox Church has always reflected a more philosophical branch of Christianity. Part of their beliefs is that religion is a personal experience; there is often no exact definition of religious truth for all individuals. The Orthodox Church is lead by the head bishops (although these bishops don’t have the same power as the Pope does in Catholicism). 2. The Roman Catholic Church is, by far, the biggest denomination of Christianity with more than one billion followers. 3. The roots of the Anglican Church lie within its first church, the Church of England; in fact the Medieval Latin meaning of Anglican is “of England.” The Anglican Church was originally spread through English colonization, but this also led to the several independent Anglican Churches. 4. The Protestant church goes directly to the Word of God for instruction, and to the throne of grace in his devotions. 1.

Sufism is a mystical way of approaching the Islamic faith. 2. Full article: Religious live-streaming: constructing the authentic in real time. Introduction In recent decades, massive rates of conversion have changed the religious landscape for millions of believers. 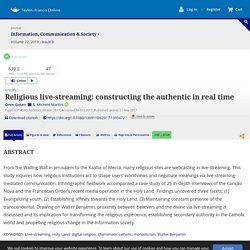 For example, historic data suggest that till the 1960s, least 90% of Latin America’s population was Catholic. Nowadays, the Pew Research survey shows, 69% of adults (425 million) across the region identify as Catholic (2014), of which two-thirds have joined Charismatic Catholic movements. Concurrently, about 75 million Catholics have converted to the competing Charismatic Pentecostal movement (Chesnut, 2009Chesnut, R. A. (2009). Religious believers view such live-streamed religious media not only in the privacy of their homes, but also on monitors situated in public places, such as shops, hospitals, and retirement communities, as well as in religious venues (e.g., churches, mosques, religious youth centers).

Literary review Religion and media Beyond drawing upon the research on televangelism, the present study also draws upon current online video scholarship. Rudolf Otto and the Concept of the Numinous - Oxford Research Encyclopedia of Religion. Untold Australia Strictly Jewish. Burning the Quran, Endangering America. As you may know, a Florida church is planning to burn copies of the Quran on 9/11. 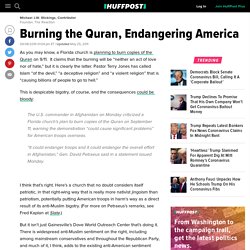 It claims that the burning will be “neither an act of love nor of hate,” but it is clearly the latter. Pastor Terry Jones has called Islam “of the devil,” “a deceptive religion” and “a violent religion” that is “causing billions of people to go to hell.” This is despicable bigotry, of course, and the consequences could be bloody: The U.S. commander in Afghanistan on Monday criticized a Florida church’s plan to burn copies of the Quran on September 11, warning the demonstration “could cause significant problems” for American troops overseas.

“It could endanger troops and it could endanger the overall effort in Afghanistan,” Gen. I think that’s right. But it isn’t just Gainesville’s Dove World Outreach Center that’s doing it. And yet it continues. If they even understand this, conservatives don’t seem to care. Subscribe to the Politics email. Rudolf Otto and the Concept of the Numinous - Oxford Research Encyclopedia of Religion.