New Tab. Wearable Carbon Credit Meter Keeps Track of Your Emissions. Nick Hunter Travel Key" width="620" height="426" /> Most of us have only a vague idea of our daily carbon emissions; we know that riding the train to work is better than driving, but not by how much. 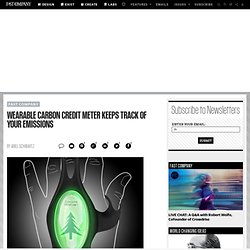 Industrial designer Nick Hunter wants to change that with his wearable carbon credit meter, which gives wearers a monthly allowance of carbon credits to use on transportation. In Hunter's vision, commuters wear something called a "Travel Key" on their hand that glows green, yellow, orange or red depending on how effectively the wearer uses public transportation. When citizens get on a train, subway, or bus, they touch their Travel Key to a chip reader that activates a GPS signal. The signal tracks distance traveled and number of passengers onoard to calculate how many carbon credits are used. [Via Ecofriend] Related:World Green Exchange is Now a Carbon Credit Shopping Mall. Futuristic Wearable Displays are now a Reality. Google’s ubiquity and influence in the search engine business often transfers, at least in the beginning, to other products it creates and seeks to market. 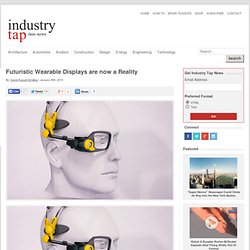 With deep pockets and a world-class marketing team Google introduced Google glasses by live streaming a skydive from a blimp over San Francisco during its launch event. The skydivers wore “Google Glass” and return to Earth safely in a well received publicity stunt. However, it wasn’t well known at the time that competitors already existed and had been providing rival products with similar designs for several years. One competitor Vuzix, from Rochester New York, markets its Smart Glasses M100 which contains a microphone, an earpiece, a camera and motion and GPS sensors.

It is capable of running an android mobile operating system. Vuzix offers a range of products from wearable displays for movie watching to augmented reality glasses with the camera and display in each lens. David Schilling More articles from Industry Tap... Wearables. The future of scan techology. CJ Castillo / July 19, 2013 Each year, tech analyst Mary Meeker presents a state of the Internet report that discusses the past, present and future trends in computing. 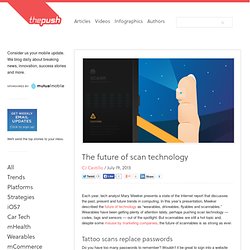 In this year’s presentation, Meeker described the future of technology as “wearables, driveables, flyables and scannables.” Wearables have been getting plenty of attention lately, perhaps pushing scan technology — codes, tags and sensors — out of the spotlight. But scannables are still a hot topic and, despite some misuse by marketing companies, the future of scannables is as strong as ever.

Tattoo scans replace passwords Do you have too many passwords to remember? A prototype of the tattoo was revealed at this year’s D11 conference by the head of special projects at Motorola, Regina Dugan. Lifesquare assists EMTs In 2012, Northern California’s Marin County introduced a scannable called Lifesquare that helps victims and first responders in emergency situations.

Mercedes-Benz is also on the scene Gifts, in an instant. E Ink Quick Start Kit - BNS Solutions. RFID VS BARCODES: Advantages and disadvantages comparison. - Logistics & Materials Handling Blog. 01 May, 2012 While manufacturers currently employ two forms of automated data collection: barcodes and RFID systems; there is much hype as to whether RFID will end up taking over the barcode. 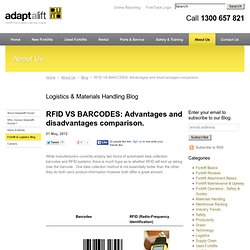 One data collection method is not essentially better than the other; they do both carry product information however both differ a great amount. From this comparison we can see that both forms of automated data collection have their advantages and disadvantages; and one may be preferable to suit your specific needs; however one can’t be said to be more superior than the other. Will barcodes slowly be replaced with RFID technology in today’s supply chain? Fmr. Frog Design Strategist: What We Need For Wearable Computing To Work ⚙ Co. One of the most critical challenges the wearable computing industry will face will be one of user interface design, as we’ve already explored in our ongoing post chronicling this emerging field. 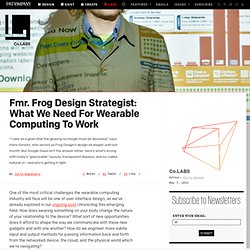 How does wearing something on your body change the nature of your relationship to the device? What sort of new opportunities does it afford to shape the way we communicate with these new gadgets and with one another? How do we engineer more subtle input and output methods for passing information back and forth from the networked device, the cloud, and the physical world which we’re navigating? Some designers believe that, in an effort to make the technology disappear, the obvious next step is to use the human body itself as an interface, positing that as wearables evolve, they’ll need to go beyond the screen and move into a more gestural, more “natural” modes of interaction. Yet design writer John Pavlus argues that your body does not want to be an interface: NUI is a misnomer. Motorola PWR LNK on Behance. Motorola DS9808 on Behance.