More of the Lush Life...

11 Tequila Cocktails to Drink in Bars Now. The Secret Ingredient in the World's Best Margarita. Riesler Morales knows the secret to better Margaritas and he wants to share it with the world. 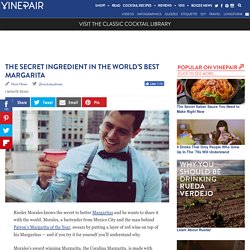 Morales, a bartender from Mexico City and the man behind Patron’s Margarita of the Year, swears by putting a layer of red wine on top of his Margaritas — and if you try it for yourself you’ll understand why. Morales’s award winning Margarita, the Coralina Margarita, is made with Patrón Reposado, Patrón Cintrónge Orange, lime juice, simple syrup, and a topping of a big red wine like a malbec or a carménère made in Mexico.

Then the glass is rimmed with a salt, sugar, and hibiscus mix. It is, as Morales tells me shortly after making one for me to try, “simple and elegant.” If this is elegance in a glass, then everyone needs to taste elegance. Morales says that the Coralina “reflects my Mexican traditions and folklore,” but it was also inspired — as all great things are — by a love story. The Classic Aviation Cocktail Recipe. The Aviation Cocktail is one of those cocktails with a long and rocky past, though it is a fantastic classic cocktail that is always worth revisiting when the opportunity arises. 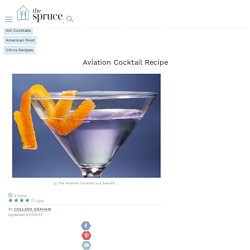 This mix is simple and in true old-fashioned style it requires just a few ingredients. The problem is that the key to getting the stunning blue color is a rather elusive liqueur. The 7 Best Rye Whiskies To Use In A Manhattan. So, here’s the thing about rye whiskey: it’s not terribly common for small brands to produce it. 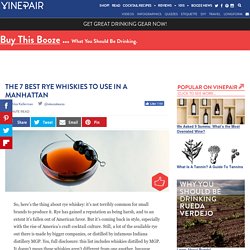 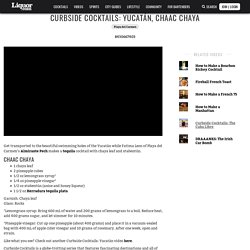 Reduce heat, add 400 grams sugar, and let simmer for 10 minutes. *Pineapple vinegar: Cut up one pineapple (about 400 grams) and place it in a vacuum-sealed bag with 400 mL of apple cider vinegar and 10 grams of rosemary. Paloma. We Asked 7 Bartenders: What Is the Most Underrated Cocktail? We’re living in a time of peak craft cocktail culture. 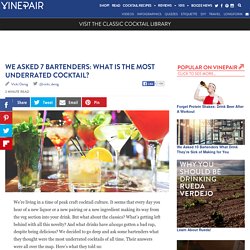 It seems that every day you hear of a new liquor or a new pairing or a new ingredient making its way from the veg section into your drink. Surfer on Acid Cocktail Recipe. Aviation Cocktail Recipe. DRAAANKS: The Aviation. The Amazing Art of the Japanese Highball. Login I forgot my password Don't Have an Account? 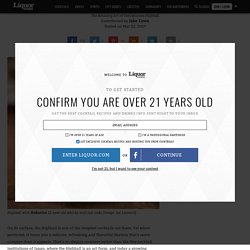 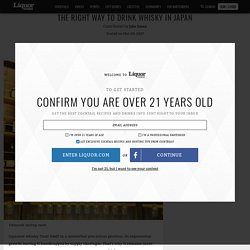 Hiroyasu Kayama founded the joint three years ago and is in complete command of a captivating, creative and immersive cocktail experience. He makes his own absinthe, as well as his own Campari, grinding up spices on his bar top and still using beetles to provide the red coloring. He might cold-distill a floral coffee water elixir over candlelight for one drink or break out an enormous five-liter bottle of vermouth from the 1950s for another.

16 Bartenders Pick the Most Underrated Cocktails in Existence. Login I forgot my password Don't Have an Account? 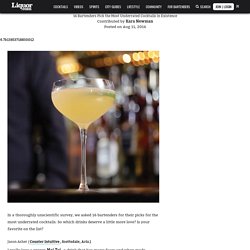 Signup. Monte Carlo Cocktail Recipe. 11 Whiskey Cocktails to Drink in Bars Now. 12 Tiki Drinks That Taste Like Summer. Nothing screams summer vibes like a good old-fashioned tiki drink to get the party started. 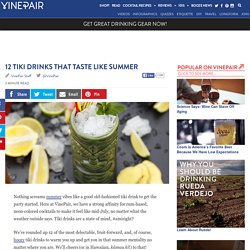 Here at VinePair, we have a strong affinity for rum-based, neon-colored cocktails to make it feel like mid-July, no matter what the weather outside says. Tiki drinks are a state of mind, #amiright? We’ve rounded up 12 of the most delectable, fruit-forward, and, of course, boozy tiki drinks to warm you up and get you in that summer mentality no matter where you are. We’ll cheers (or in Hawaiian, kāmau kī!) Coolmaterial. Let’s face it, you’ve had your fair share of whiskey sours in your life. 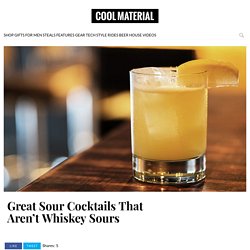 It’s a pretty basic drink, made even worse by the addition of store-bought sour mix. It’s time to open your eyes to a whole new world of sour cocktails. If you enjoy whiskey, you can still drink it. How to Cocktail: Becharita. We Asked 10 Bartenders: What's the Most Overrated Drink? Here at VinePair, we love getting you the inside scoop. In a profession like bartending, your average drink slinger is undoubtedly going to be opinionated about certain matters of the craft — and we’re dying to find out what’s going on behind that smile. Welcome to our Ask a Bartender Series, which picks apart what goes on inside the brains behind the booze. To launch our series, we asked nine bartenders: What is the most overrated drink? “I’d have to go with the Piña Colada. Delightful when made correctly and served frozen, of course. “Oh, man, this is a tough one because most drinks have their time and place. Flying Dutchman Cocktail Recipe. Hurricane Cocktail Recipe.

Jungle Bird Cocktail Recipe. DRAAANKS: The Cosmopolitan. The BK Cocktail: Curbside Cocktails. Tonia Guffey, the bar manager at Dram in New York City’s Brooklyn, mixes up this rye whiskey cocktail next to the Brooklyn Bridge. 1.5 oz rye 1 oz amaro .25 oz maraschino liqueur .25 oz dry vermouth 3 dashes Angostura bitters. Taylor Bird Sazerac — Recipes from the Road. The Sazerac is a beautiful drink in its simplicity. It is unique and exact. It requires technique and style. And each ingredient tells the history of New Orleans — the French absinthe, the American rye, the Louisiana sugar, the Caribbean bitters. Rob Roy Cocktail Recipe. How to Cocktail: Vesper. The Revolver Cocktail Recipe. The Zombie Cocktail Recipe. 11 Valentine’s Day Drinks to Make at Home. Bourbon Cough Syrup for Grownups.

It seems like winter colds strike with a vengeance right now, at the end of the season. In my household we drink literally gallons of ginger and honey tea during the cold months. Fresh ginger tea is delicious, and it wards off colds pretty well. 15 Most Popular Cocktail Recipes: January 2017 by Liquor.com. Painkiller Cocktail Recipe. Winter Toddies To Defeat The Snowpocalypse – Basil Hayden's. Toddies. I first learned to make them while bartending my way through a cold and lonely winter in Ireland. The concoction consists of brown liquor, spices, sugar, citrus and hot water. Today, the Toddy remains my drink of choice upon first arriving at the bar after shaking the flakes off a long, wintry walk through the snow-covered streets of Chicago. It’s the perfect way to warm up to the place, inside and out.

Here are eight of my favorite recipes created with the help of my friends Shae Whitney of DRAM Apothecary, Chad Hauge and Seth Putnam. DRAM Apothecary’s Shae Whitney, a friend from another snowy place, the tiny ghost town of Silver Plume, Colorado, suggested we try to make Toddies using her products. Blood and Sand Cocktail Recipe. Blood Orange Tequila Fizz. I’ve very busy trying to figure out the billion ways I can consume blood oranges. Very, very busy. FYI: The depression that will set in when blood orange season is over will be ROUGH. Some TREMENDOUS Menu Items Have Been Created For Trump's Inauguration. Cocktail Recipe: El Presidente. The El Presidente is a Cuban-born cocktail from the Dark Days of American tippling – Prohibition. The history of the cocktail is somewhat hazy, with several different bartenders credited with creating it in honor one or more Cuban presidents in various different bars. The drink has often been lamented as a lost treasure from the heyday of Cuban mixology, when thirsty Americans – unable to quench their thirst for great cocktails at home – would sail from Florida to Havana.

Godfather Cocktail Recipe. How to Cocktail: Tom Collins. Coolmaterial. On the whole, cocktails are one of those things that’ll never go out of style. Their recipes might change and new ones invented, but as long as the world still has bourbon in it, or rye, or gin, or vodka, brandy, tequila, any booze, really, there will be people throwing it together in a shaker, mixing it up, and straining it into a glass. We all know about the old stuffーThe Old Fashioneds, Manhattans, and Gin and Tonics of the worldーalong with some new or low-cal ways to serve them, but what about the stuff that flies under the radar?

It’s not like we only have a half dozen ways to mix alcohol, juice, herbs, or whatever bitters are. Well, that’s why we’re here, friend. 9 Retro Cocktails Ready for a Comeback. How to Cocktail: French 75. The 9 Cocktail Recipes Everyone Should Memorize. 11-signature-cocktails-from-around-the-world?email=puhnner@hotmail. 15 Most Popular New Year's Eve Cocktail Recipes by Liquor.com. Champagne Punch. Wonder What It’s Like to Drink a Daiquiri in Cuba? Watch This. Bourbon Drinks. American 25 Cocktail Recipe. Bourbon Salted Caramel White Russian. Bourbon Drinks. El Floridita Cocktail Recipe (aka Hemingway Daiquiri) How to Cocktail: Vieux Carré. 9 Cocktails to Make with Ginger Beer Besides Dark n' Stormies.

Spicy, spritzy ginger beer is always a great cocktail mixer to have on hand—and not just for a Dark n’ Stormy. As simple and delicious as that classic drink is, it’s certainly not the only boozy way to take advantage of ginger beer. Here, nine more great ideas: 1. Ginger Shandies The perfect al fresco sipper, this pitcher cocktail mixes wheat beer with ginger beer, lemon slices and mint. 2. This updated version of a Stone Wall mixes rum with ginger beer and apple cider. 3. Half Baked Harvest - Made with Love. I feel like this is such a Sunday recipe. How to Make a Patrón XO Cafe Nightcap. Iguana - Mix That Drink. How to Drink Like a Broadway Star. History is not homogenous. DRAAANKS: The Irish Car Bomb. 16 Cocktails to Drink Outside This Weekend. How to Make a Cosmopolitan Cocktail. The-cuban-cocktail-with-magical-healing-powers?email=puhnner@hotmail. Legend has it that the canchánchara cocktail was first mixed by Mambíses, Cuban guerrillas fighting for independence from Spain, as a way to ward of disease in the jungles of eastern Cuba.

Others insist that African slaves created this tonic in secret (with ingredients they had easy access to) to avoid the flu. Coolmaterial. Alcoholic punch has suffered a bit of a dip in popularity, and by bit of a dip we mean its popularity almost completely evaporated since its peak in the 17th and 18th centuries. The invention of the cocktail eclipsed the punchbowl, although invention is a generous word, since cocktails are basically personal punches. Coolmaterial. Coconut Colada. Racy Strawberry French 75 Cocktail. Cocktail Recipes. Cocktail Recipe: Cold Brew White Russian. You're Making The Sazerac Incorrectly.