Best French 75 Recipe: How to Make the Champagne and Gin Cocktail. The French 75 made quite the impact when it was first introduced, to say the least. 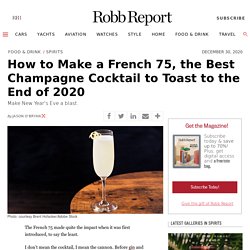 I don’t mean the cocktail, I mean the cannon. Before gin and Champagne ever got involved, the French 75, officially “Matériel de 75 mm Mle 1897,” was a 2,700-lb field gun rolled out by the French to fight WWI. It was a closely guarded secret for years, a huge leap forward in artillery technology, capable of hitting a target six miles away with a 13.7-lb shell, and—because of a newly invented hydro-pneumatic recoil mechanism—it could do so 15 times a minute, a combination of accuracy and speed which was at the time completely unheard-of. The weapon became internationally famous among soldiers and civilians alike, and the people of France took it as a point of national pride that the French 75 was the gun that helped win the war for the Allies.

13 Easy-To-Make Mezcal Cocktails To See You Through This Pandemic Winter. I first encountered mezcal during a particularly fun party in Tales of the Cocktail in New Orleans a while back. 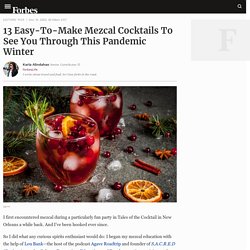 And I’ve been hooked ever since. So I did what any curious spirits enthusiast would do: I began my mezcal education with the help of Lou Bank—the host of the podcast Agave Roadtrip and founder of S.A.C.R.E.D (Saving Agave for Culture, Recreation, Education and Development), a 501(c)3 not-for-profit that uses traditional and artisanal agave spirits from rural Mexico as a channel to advance the communities that produce truly special mezcals and raicilla. Best Whiskeys 2020. We get to drink a lot of whisk(e)y around these parts. 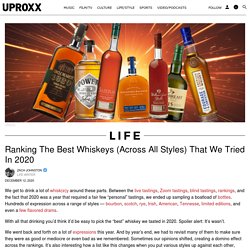 Between the live tastings, Zoom tastings, blind tastings, rankings, and the fact that 2020 was a year that required a fair few “personal” tastings, we ended up sampling a boatload of bottles. Hundreds of expression across a range of styles — bourbon, scotch, rye, Irish, American, Tennesse, limited editions, and even a few flavored drams. The 50 Best Spirits of 2020.

Woodinville Whiskey. Bartenders Tell Us The Whiskey or Brand They Drink Above All Others. There are so many whiskeys (and whiskies) on the market, most of us will never even come close to trying them all. 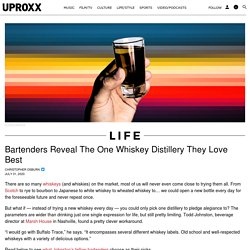 From Scotch to rye to bourbon to Japanese to white whiskey to wheated whiskey to… we could open a new bottle every day for the foreseeable future and never repeat once. Killer Bee recipe. Best gin 2020: 20 great gin brands tried, tested and ranked. Choosing the best gin is not an easy thing. 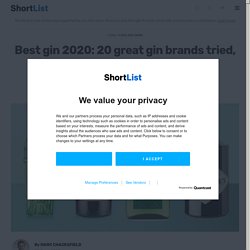 Everyone's taste buds are different and thanks to the sheer amount of gin brands available right now (we seriously aren't complaining here), the choice can be overwhelming. Best Arnold Palmer Spiked Recipe - How to Make Arnold Palmer with Alcohol. Best Bourbon for Under $50. Finding a very solid cheap bourbon is pretty easy these days — there are some good values to be scored for under $30. 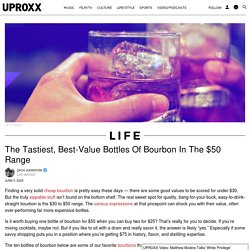 But the truly sippable stuff isn’t found on the bottom shelf. The real sweet spot for quality, bang-for-your-buck, easy-to-drink-straight bourbon is the $30 to $50 range. The various expressions at that pricepoint can shock you with their value, often over-performing far more expensive bottles. Is it worth buying one bottle of bourbon for $50 when you can buy two for $25? Best White Wine Sangria Recipe - How to Make White Wine Sangria. Summer is calling, and so is sangria. This easy white-wine sangria recipe has all of your favorite fruits (and if it doesn't, go ahead and add them!)

15 Easy Cocktail Recipes You Can Make at Home. The Best Mezcals More People Should Know About. Just because we’re both socially distancing and sheltering-at-home, doesn’t mean we can’t still enjoy some of the fun holidays coming down the pike. 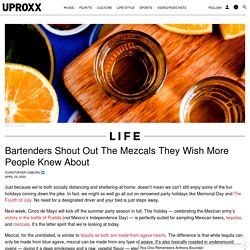 In fact, we might as well go all out on renowned party holidays like Memorial Day and The Fourth of July. No need for a designated driver and your bed is just steps away. Next week, Cinco de Mayo will kick off the summer party season in full. Holiday Gift Guide 2019: The Best Bourbons Under $100. There are so many things to love about bourbon. 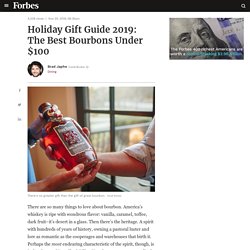 America’s whiskey is ripe with wondrous flavor: vanilla, caramel, toffee, dark fruit–it’s desert in a glass. Then there’s the heritage. A spirit with hundreds of years of history, owning a pastoral luster and lore as romantic as the cooperages and warehouses that birth it. Perhaps the most endearing characteristic of the spirit, though, is its head-scratching affordability. Yes, there are some exceedingly expensive bourbons on the market today, but they remain the outliers.

Coopers' Craft Barrel Reserve 100 Proof ($30) Brown-Forman is the only major whiskey company in the United States that produces all of its own barrels. 10 Best Rye Whiskey Brands to Drink 2019 - Top Rye Bottles to Buy. 12 Best Tequila Brands 2019 - What Tequila Bottles to Buy Right Now.