More and More of the Lush Life

Añogo Cocktail Recipe. 5 Classic Cocktails, Reinvented By the Pros. 8 Disco Drinks to Try Today. Disco’s heyday was a time when people flocked to the dance floor, led by members of the art, music, fashion, entertainment and other worlds. 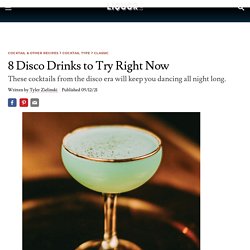 The era is also known, however, for ushering in what are widely considered to have been the dark days of cocktailing in America. The 1970s through the 1990s or mid-2000s, depending on whom you ask, are (not inaccurately) thought to be a time of lackluster cocktail-making. The drinks created and widely consumed during the disco era, such as the Harvey Wallbanger and Midori Sour, were typically sweet, sometimes to the point of being unpalatable, and often vibrantly hued—more appealing to look at than to actually imbibe. In recent years, more than a decade after the resurgence of craft cocktails conjured a more serious (and one might say often humorless) approach to bartending, cocktail enthusiasts have become eager to embrace the playful side of drink culture once again, including drinks last seen on disco dance floors.

11 Great Cocktails to Make for Labor Day. What Is Aperitivo Hour: Its History and How To Enjoy It. A world that represents not only a category of beverages but an act, a state of mind and even a time of day, the all-encompassing aperitivo in Italian (or aperitif in French) is “a magical idea” that is unique to “the great Italian idea of enjoying one another,” says Linden Pride, the owner of New York City’s Dante, the Italian-American aperitivo-focused bar and cafe currently ranked best bar in the world. 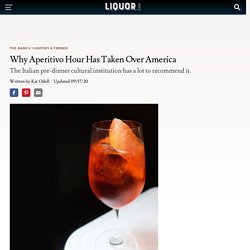 What Are Aperitivi? Typically referring to low-alcohol drinks containing bittersweet liqueurs and/or vermouth, an aperitivo drink is intended to open up one’s palate and stimulate a drinker’s appetite before a meal. The liqueurs used in making these refreshing cocktails (think classics like an Aperol Spritz or a Campari & Soda) are made from closely guarded secret recipes of bitter herbs, roots, spices and citrus macerated in a wine or spirit base then sweetened. There’s some science behind the appetite-whetting nature of the drinks. What Is Aperitivo Hour? America Embraces Aperitivi. America’s relationship with alcohol [Timeline]

Alcohol has been present in the United States since before it became a country. 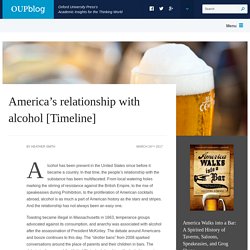 In that time, the people’s relationship with the substance has been multifaceted. From local watering holes marking the stirring of resistance against the British Empire, to the rise of speakeasies during Prohibition, to the proliferation of American cocktails abroad, alcohol is as much a part of American history as the stars and stripes. And the relationship has not always been an easy one. Toasting became illegal in Massachusetts in 1663, temperance groups advocated against its consumption, and anarchy was associated with alcohol after the assassination of President McKinley.

The debate around Americans and booze continues to this day. Who Invented the Pickleback? In 2009, the media discovered a new low-brow, two-step shot, in which a dram of whiskey was chased by a shot of straight pickle brine. 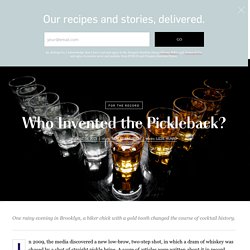 A score of articles were written about it in record time in outlets like The New York Times, New York Magazine, The New York Post and more. By 2010, you couldn’t escape the Pickleback. It had infiltrated watering holes of all stripes—restaurant bars, sports bars, pubs and, perhaps most importantly, buttoned-up cocktails bars that otherwise took themselves quite seriously. The latter made an exception where the Pickleback was concerned, however, because the shot was waggish and tongue-in-cheek; it helped to soften the then-haughty reputation the mixology crowd had built up and was trying to shake; and, well, it moved a lot of whiskey. One-Ingredient Cocktails for Every Crisis. Travel, entertainment, laundry—these days we’re doing less of all of it because simplification is a necessary approach to daily life. 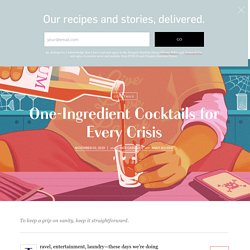 This is not to say we’re doing less drinking. Perhaps you’re paring back the complexity of your cocktails’ formulae, letting slide the precision of proportions, abandoning artisanal ice, eschewing intricate garnish. Consider this moment an enlightened reprieve from the pressure of craft in general. Counting gentle dashes of bitters, flaming a carefully rationed orange’s peel, dusting off that long-neglected bottle of crème de violette—it can all feel hollow, the effort downright impossible some days. However, the joy of drinking persists.

The Life-Changing Magic of Equal-Parts Cocktails. You may not realize it, but you’re probably already familiar with “equal parts” drinks—cocktails with ingredients measured out in precisely equal amounts. 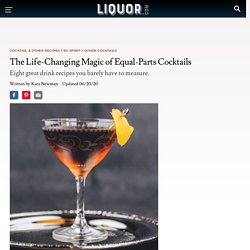 Bartenders have been making these drinks for years, knowing that they can pour in a flash. Not to mention, it makes memorizing formulas that much easier. Now it’s your turn to try your hand at it with drinks you already know and love or will want to get to know better. These drinks are great for the home bartender precisely because of their simplicity. Here are eight favorites. 1. Elements: Byrrh Grand Quinquina - Imbibe Magazine. “Wow, I haven’t seen that stuff since the Nixon administration,” said a baby boomer family friend one afternoon at an upscale Italian eatery in Greenwich Village. 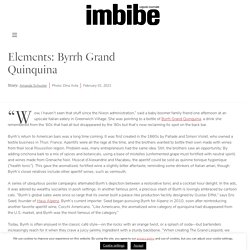 She was pointing to a bottle of Byrrh Grand Quinquina, a drink she remembered from the ’60s that had all but disappeared by the ’80s but that’s now reclaiming its spot on the back bar. Byrrh’s return to American bars was a long time coming. It was first created in the 1860s by Pallade and Simon Violet, who owned a textile business in Thuir, France. The Drinks That Broke Bitters. The cocktail world—and cocktails themselves—turned upside down sometime around 2009. 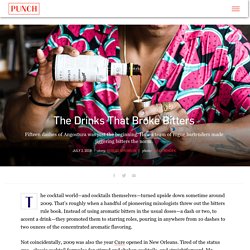 That’s roughly when a handful of pioneering mixologists threw out the bitters rule book. Instead of using aromatic bitters in the usual doses—a dash or two, to accent a drink—they promoted them to starring roles, pouring in anywhere from 10 dashes to two ounces of the concentrated aromatic flavoring. The Aperitivo Cocktails That Time Forgot. Over the years, Americans have adopted many of Italy’s finest culinary exports, from cappuccino and tiramisu to Parmigiano-Reggiano and prosciutto di Parma to prosecco and pizza. 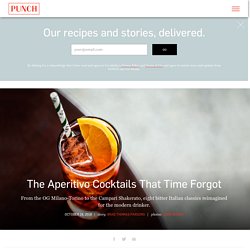 But, living in a post-workday culture often built around the boozy, value-added happy hour, many have been hesitant to embrace the elevated Italian tradition of aperitivo—that magical, transitory time that bridges the gap between work and dinner. That being said, two popular Italian cocktails have established a foothold stateside. 50 Orange Juice Cocktail Recipes to Enjoy. Orange juice is an essential element to any well-stocked bar, there is no question about that. 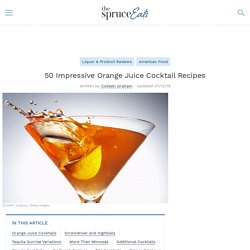 Without it, you cannot make a Screwdriver, a Bronx Cocktail, a Mimosa, or even a Tequila Sunrise. Orange is a versatile fruit flavor and the more drinks you mix up, the more you will realize the importance of both juice and the many orange liqueurs in the bar. The three main citrus juices—lemon, lime, and orange—will find their way into countless drink recipes. Recipes. 11 Late-Winter Cocktails to Make Right Now. 11 Early-Summer Cocktails to Make Right Now. 16 Bartenders Pick the Most Overrated Cocktails in Existence. In a thoroughly unscientific survey, we asked 16 bartenders from across the nation for their picks for the most overrated cocktails. So which drinks should be kicked off the island? Is your favorite on the list?

Chris Elford (Navy Strength, No Anchor; Seattle) “I think cocktails that involve highly scientific elements can be overrated because they very often utilize methods at the expense of flavor. I see this happening all over the country. Old Fashioned Amanda Elder (Pouring Ribbons, New York City) “I hear people say all the time, ‘Old Fashioneds are the new Vodka Soda,’ meaning it’s a knee-jerk order if you don’t know what to drink.

21 Summer Cocktails - Easy Recipe Ideas. We Asked 12 Drinks Pros: What Cocktail Should be Considered a Modern Classic? As bars and restaurants continue to navigate the coronavirus pandemic and reopening phases, VinePair asked the bartenders and drinks professionals below to provide a virtual tip jar or fund of their choice. More resources for helping hospitality professionals are available here. Cocktails such as the Old Fashioned, Martini, and Daiquiri — all indisputably classics — have been found on bar menus for over a century. Simplicity and balance lie at the heart of their enduring appeal. 9 Sours to Try Today.

The sour, requiring just three ingredients, is one of the simplest types of cocktails to make and also among the easiest to riff on. The standard sour template consists of a spirit, a sweetener and a citrus juice, which contributes the “sour” element. The first known written recipe for a sour appears in American bartender Jerry Thomas' 1862 book, “The Bartender's Guide,” which has recipes for a Brandy Sour, Gin Sour and Santa Cruz (a rum sour), but the sour had existed as a cocktail format for perhaps a couple hundred years before it first appeared in print. The sour, a derivative of punch, was first created on British naval ships in as early as the 1600s. In those days, scurvy, a disease linked to vitamin C deficiency, often plagued sailors at sea. They eventually discovered that ingesting citrus would help prevent this painful disease.

If you’ve had a Whiskey Sour or Gimlet, then you’re familiar with this style of cocktail. 13 Fun and Stylish New Year's Eve Cocktail Recipes. 6 Highballs to Try Right Now. The highball is one of the most popular cocktail styles worldwide. The category, which in its purest form is merely a spirit plus a carbonated ingredient, includes popular drinks such as the Vodka Soda, Gin & Tonic and Scotch & Soda, as well as the Dark ’n Stormy and Paloma. While the highball may appear simple, creating a truly excellent one requires high-quality ingredients, precise proportions and flawless technique.

The key to crafting best-in-class highballs is to ensure you use balanced and complementary ingredients, premium ice, and a hand-numbingly cold carbonated beverage for optimal effervescence. You may want to read up on perfecting your highball for some inspiration. These are six highballs to try at home, from easy two-ingredient preparations to slightly more advanced concoctions involving multiple spirits. A Tour of America's Beloved Regional Cocktails. Only a few states, cities or regions across the country can lay claim to an original cocktail all their own. Washington, D.C. has the Rickey; New Orleans has its very own cottage industry of homegrown classics, from the Ramos Gin Fizz to the Sazerac; and, of course, New York has the Manhattan.

But there’s also a canon more esoteric drinks that have grown up over the past several decades to become local obsessions, from Maryland’s Orange Crush to the dive-bar drink known in the Upper Midwest as the “Beertini.” Here’s a tour of some of our favorites. 13 Holiday Cocktail Recipes From the World’s Best Bars. Amaro Cocktails: What are they and why are they special? - Cocktails Away. Some posts here on Cocktails Away contain affiliate links, which means I earn a small commission if you click one of these links – at no extra expense to you.

20 best Grand Marnier cocktails. Grand Marnier is one of the noble and truly premium liqueurs that has transitioned from the after-dinner sideboard to bartender's essential. We Asked 10 Bartenders: What's the Most Underrated Tequila Cocktail? 20 Whiskey Drinks and Cocktails for 2020 - Classic Whisky Recipes. Tyler Joe There isn't much a good whiskey cocktail can't cure. And there are quite a few ailments in this weird, all-time-worst year that could use a touch of spiritual healing. The Classic Whiskey Highball Recipe. 20 Of The Best Rum Cocktails To Make This Winter. 20 Rye Whiskey Cocktails to Try Today. 20 Vodka Cocktails to Try Today. More Than the Martini: The Many Other Drinks of James Bond. Amaretto Sour - A Classic Amaretto Cocktail That's Not Too Sour or Sweet. Amaretto Sour Cocktail Recipe. Amaretto Sour Recipe. American Flyer Cocktail Recipe - Drink Lab Cocktail & Drink Recipes. Americano Cocktail Recipe.