(16) Life in the Soil – a talk for beginners. Dr Matthew Shepherd. The Meadow Makers’ Gathering 2019. The Real IPM. Founded in 2003 by Louise Labuschagne and Dr Henry Wainwright, Real IPM, now a member of the Biobest Group employs 228 members of staff. 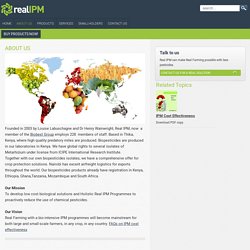 Based in Thika, Kenya, where high quality predatory mites are produced. Biopesticides are produced in our laboratories in Kenya. We have global rights to several isolates of Metarhizium under license from ICIPE International Research Institute. Together with our own biopesticides isolates, we have a comprehensive offer for crop protection solutions. Nairobi has excent airfreight logistics for exports throughout the world. Our Soil is Alive LBF. Soils and nfm. Home Garden Series: Using Cover Crops in the Home Garden. Publications : Home Garden Series Download PDF Robert Westerfield, University of Georgia Department of Horticulture, Extension horticulturist Carmen Westerfield, U.S. 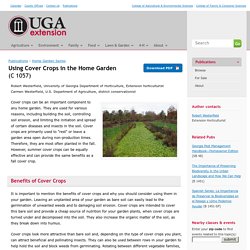 Department of Agriculture, district conservationist Cover crops can be an important component to any home garden. Plant Cover Crops to Help Improve Soil Health – REALfarmacy.com. Growing cover crops will add organic matter to your soil while also loosening any compacted soil you might have. 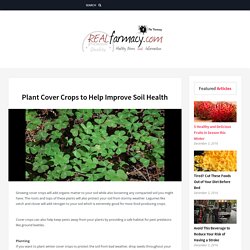 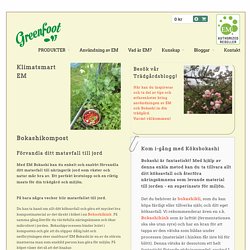 Svamp överväger proportionellt mot bakterier i skogsmark. How to Make Compost. Compost is the ultimate ingredient for building fertile soil. 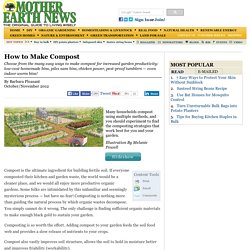 If everyone composted their kitchen and garden waste, the world would be a cleaner place, and we would all enjoy more productive organic gardens. Some folks are intimidated by this unfamiliar and seemingly mysterious process — but have no fear! Composting is nothing more than guiding the natural process by which organic wastes decompose. You simply cannot do it wrong. The only challenge is finding sufficient organic materials to make enough black gold to sustain your garden. Composting is so worth the effort. How to Make a Compost Bin from Pallets. The Humanure Handbook. Composting Toilet - What Is It? And Why Do I Need One? We have owned our composting toilet since June 2013, and we think everyone with a boat, an RV or a Tiny House (on second thought pretty much everyone!) 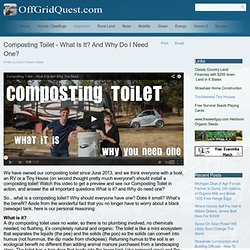 Should install a composting toilet! Watch this video to get a preview and see our Composting Toilet in action, and answer the all important questions What is it? The Humanure Handbook - Center of the Humanure Composting Universe. Top Things to Compost, and What to Avoid. Upwards of 30% of the garbage a household throws out each week could potentially go into a compost pile. 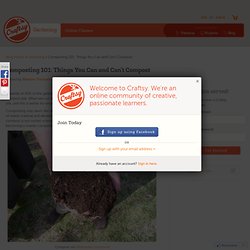 When we cut domestic waste generation we are extending the life of a landfill site, and this is better for environmental management for our entire community. Composting may seem like an intimidating task, but all that you are really doing is creating a pile of waste material and allowing it to decompose. Deciding things you can and things you can’t compost is not rocket science. With a few simple composting tips you will be on your way to becoming a master composter.

Compost via Wikimedia Commons Your lawn, garden and houseplants cannot get too much compost. The composting area or how to abound life in your soil - Urban composting toilet: humanure for your garden. Kökskompostering med bokashi. Hot Compost – Composting in 18 Days. Regular composting, also known as “cold composting”, involves placing a variety of organic materials in a compost bin, enclosure, or even just in a large heap, and leaving it there until it breaks down several months later. 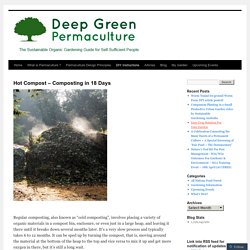 It’s a very slow process and typically takes 6 to 12 months. It can be sped up by turning the compost, that is, moving around the material at the bottom of the heap to the top and vice versa to mix it up and get more oxygen in there, but it’s still a long wait. The other approach to composting is “hot composting”, which produces compost in a much shorter time. It has the benefits of killing weed seeds and pathogens (diseases), and breaking down the material into very fine compost. In contrast, cold composting does not destroy seeds, so if you cold compost weeds, any weed seeds will grow when you put the compost into the garden. The requirements for hot composting using the Berkley method are as follows: 3 Composting Techniques Everyone Should Know. We all know by now that composting is important to the environment. 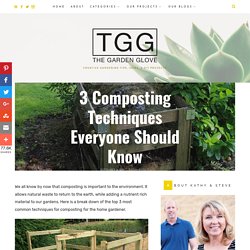 It allows natural waste to return to the earth, while adding a nutrient rich material to our gardens. Build a Worm Tower To Spread Compost Over Your Garden. A worm tower not only enables worms do their work at composting, but it also helps them spread out and distribute the compost in your tank garden. 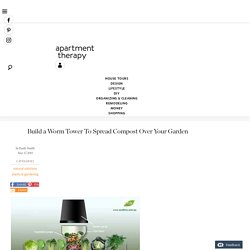 This is such a low maintenance way of keeping nutrients cycling in your garden, and easy to put together. All you'll need is a 3 or 4 foot piece of PVC piping (or a 12" concrete pipe) and a flower pot. According to Ecofilms, be sure to use a food grade PVC pipe to avoid any chemical contamination - and the concrete pipe often works best.

Punch holes in the side of the pipe. This is where the worms will travel back and forth between the compost and the garden patch. Once you've got your pipe, the next step is to bury the tower half way down in your garden with half of the pipe sticking out the top. Then, add some manure, compost worms (it's important to use compost worms), and secure with a flower pot lid. DIY: Chicken Manure Tumbling Composter. Fast compost - Soil Permaculture Design and Maintenance Permaculture Research Institute. What is Compost? Compost is humanity’s version of the humus found in nature, and the compost heap is a ‘digester’ – our tool used to produce it. Humus is made of broken down vegetation which releases nutrients back into the soil for healthy plant growth.

Similarly, under the direction of the careful gardener, the composting process breaks down a rich mixture of ingredients to produce a potent humus which will regenerate soil and foster vigorous plant growth. 5 Tips for Making Better Compost. A Complete Manual On Vermicomposting And Vermiculture » Sustainable Living World. Compost Q&A. Composting Techniques for Anyone. Compost bins can be made of repurposed materials, like these pallets. Composting doesn’t have to be difficult, nor does it require a strong back, large acreage, livestock waste or expensive bins.

Even apartment-dwellers or those with physical limitations can put their kitchen waste to work. The following are composting techniques from the simplest to the most strenuous. The easiest method of using kitchen waste and thin paper goods is to bury them. 6 Main Reasons Compost Piles Fail, and What to do. There are six common reasons why compost piles fail, but solutions are relatively easy to accomplish.

Anyone who has read about gardening knows that compost is a good thing. Compost provides and holds essential nutrients for plant growth, improves soil structure, helps retain water and improve soil aeration, and it attracts beneficial microorganisms to the soil. But sometimes even the experienced gardener may experience what I call “compost fail.” Soil Prep for Backyard Gardening. Humus - the essential ingredient: Graeme Sait at TEDxNoosa. Soil: The forgotten resource. Even more worrying, perhaps, is that it’s not just cropland that is seeing its soil degrade.

Roughly two- thirds of the world is suffering from desertification, with much of it occurring in the vast grasslands used for grazing around the world. The assumption held for decades by the vast majority of scientists and conservationists was that desertification is caused by overgrazing of livestock – predominantly cattle, sheep and goats – as intensive grazing leaves the soil bare.

However, ecologist Allan Savory says this assumption is as false as the long-held belief that the earth was flat. Giving a TED talk in 2013, he said he realised this when he observed that desertification is a major problem in American national parks, where there has been no grazing for 70 years. “We can’t blame the farmers in this.

TEDxMaui - Vincent Mina - Soil: Having a Sense of Humus. 2015 International Year of Soils. Symphony of the Soil. Dirt! The Movie (FULL) How to Compost: 7 Steps. The Soil Solution to Climate Change Film. Carbon sink. This diagram of the fast carbon cycle shows the movement of carbon between land, atmosphere, and oceans in billions of tons of carbon per year. Yellow numbers are natural fluxes, red are human contributions in billions of tons of carbon per year. White numbers indicate stored carbon. Carbon sink: General. Soil carbon.

Soil carbon includes both inorganic carbon as carbonate minerals, and as soil organic matter.[1] Soil carbon plays a key role in the carbon cycle, and thus it is important in global climate models. Overview[edit] Soil carbon is present in two forms: inorganic and organic. Soil inorganic carbon consists of mineral forms of C, either from weathering of parent material, or from reaction of soil minerals with atmospheric CO2. Carbonate minerals are the dominant form of soil carbon in desert climates. Soil Carbon: Overview. Soil Carbon: Forest soils. Soil health. About Us – Our Story. Joel Salatin at TEDMED 2012. Humus - the essential ingredient: Graeme Sait at TEDxNoosa. Everything You Know About Composting is Wrong: Mike McGrath at TEDxPhoenixville. Soil on white. Green Book Club Meeting: Dirt - The Erosion of Civilisations - University of Plymouth. Save event This Plymouth Green Book Club meeting will be discussing the book, Dirt: The Erosion of Civilisations by Professor David Montgomery.

Dirt, soil, call it what you want - it's everywhere we go. It is the root of our existence, supporting our feet, our farms, our cities. This fascinating yet disquieting book finds, however, that we are running out of dirt, and it's no laughing matter. An engaging natural and cultural history of soil that sweeps from ancient civilisations to modern times, Dirt: The Erosion of Civilisations explores the compelling idea that we are - and have long been - using up Earth's soil.

Once bare of protective vegetation and exposed to wind and rain, cultivated soils erode bit by bit, slowly enough to be ignored in a single lifetime but fast enough over centuries to limit the lifespan of civilisations. Soil microbes lesson plan. In a strange and distant land the happy village life is thrown into turmoil by a fire breathing dragon.

Their survival threatened, two youngsters, Fizz and Boon, with the help of the audience, use the magic powers of ratio to save the day. Research into common misconceptions surrounding ratio informs the dialogue. Feisty Fizz confronts her personal fear of maths and discovers that failing is the the pathway to learning. Soil texture by feel - Soil Doctor.