Symphony of the Soil documentary 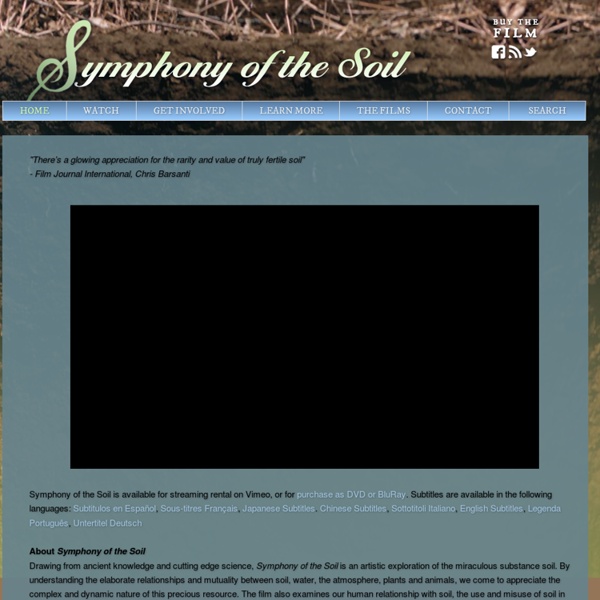 Biochar Biochar created through the pyrolysis process. History[edit] Left - a nutrient-poor oxisol; right - an oxisol transformed into fertile terra preta using biochar Pre-Columbian Amazonians are believed to have used biochar to enhance soil productivity. Carbon sink This diagram of the fast carbon cycle shows the movement of carbon between land, atmosphere, and oceans in billions of tons of carbon per year. Yellow numbers are natural fluxes, red are human contributions in billions of tons of carbon per year. White numbers indicate stored carbon. A carbon sink is a natural or artificial reservoir that accumulates and stores some carbon-containing chemical compound for an indefinite period. The process by which carbon sinks remove carbon dioxide (CO2) from the atmosphere is known as carbon sequestration. Public awareness of the significance of CO2 sinks has grown since passage of the Kyoto Protocol, which promotes their use as a form of carbon offset.

Trophobiosis Trophobiosis is a symbiotic association between organisms where food is obtained or provided. The provider of food in the association is referred to as a trophobiont. The name is derived from the Greek τροφή trophē, meaning "nourishment" and -βίωσις -biosis which is short for the English symbiosis.[1] In mutualistic relationships, the production of honeydew by trophobionts is rewarded by removal of dead hemipterans and protection from a variety of predators by the attendant ants. In some relationships the ants will build shelters for the farmed trophobionts, either to protect them or keep them from leaving the area. Tree Disease identification, symptoms, treatment options for tree diseases There are many different diseases that affect landscape trees and shrubs. Control of tree and shrub diseases cannot be properly accomplished until the disease pest is identified. Identification of tree and shrub diseases is crucial because, although most diseases can be controlled, there are some diseases that cannot be controlled. Disease control on landscape trees and shrubs can sometimes be accomplished by more than one method, depending on the particular disease that if infecting your landscape plants.

Soil carbon Soil carbon includes both inorganic carbon as carbonate minerals, and as soil organic matter.[1] Soil carbon plays a key role in the carbon cycle, and thus it is important in global climate models. Overview[edit] Soil carbon is present in two forms: inorganic and organic. Soil inorganic carbon consists of mineral forms of C, either from weathering of parent material, or from reaction of soil minerals with atmospheric CO2. Does my compost have a high humic content? Compost contains humus, but there is no standard set for how much (the %). We believe most mature composts have around 10% (+/- 5%) humus. If you compared this to a commercial 'humic fertiliser' derived from ligninite, this would have >65% humic content.

Using Agroforestry to Save the Planet Agroforestry—the use of trees in farming—benefits both farmers and the environment. According to a recent report by Biodiversity International, the Center for International Forestry Research, the World Agroforestry Centre, and Charles Sturt University, forests contribute to the livelihoods of more than 1.6 billion people. Yet, 30 percent of the world’s forests are used primarily for the production of wood products. Agroforestry is defined as the integration of trees and shrubs into crop and animal farming systems. These practices can help landowners diversify products and create social, economic, and environmental benefits. Trees and forests provide more than just food—they can enhance soils, protect biodiversity, preserve precious water supplies, and even help reduce the impacts of climate change.