Shakespeare Fun & Games. Welcome to the Fun and Games area of Will’s World, hosted by our very own Puck – the mischievous star of A Midsummer Night’s Dream! 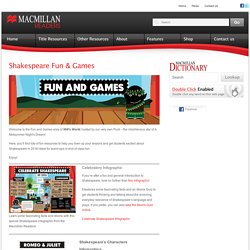 Here, you’ll find lots of fun resources to help you liven up your lessons and get students excited about Shakespeare in 2016! Ideal for warm-ups or end of class fun. Enjoy! Learn some fascinating facts and idioms with this special Shakespeare infographic from the Macmillan Readers! Celebratory Infographic If you’re after a fun and general introduction to Shakespeare, look no further than this infographic! 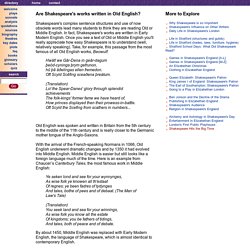 Shakespeare's complex sentence structures and use of now obsolete words lead many students to think they are reading Old or Middle English. In fact, Shakespeare's works are written in Early Modern English. Once you see a text of Old or Middle English you'll really appreciate how easy Shakespeare is to understand (well, relatively speaking). Take, for example, this passage from the most famous of all Old English works, Beowulf: Hwät! Old English was spoken and written in Britain from the 5th century to the middle of the 11th century and is really closer to the Germanic mother tongue of the Anglo-Saxons. With the arrival of the French-speaking Normans in 1066, Old English underwent dramatic changes and by 1350 it had evolved into Middle English.

Ye seken lond and see for your wynnynges, As wise folk ye knowen all th'estaat Of regnes; ye been fadres of tydynges And tales, bothe of pees and of debaat. More Resources Hefner, Polanksi and Macbeth. Balcony scene from Romeo & Juliet. BBC Michael Wood In Search Of Shakespeare 2 of 4 The Lost Years 2005 REPOST DVDRip XviD. Discover Stratford - The Official Tourism Website for Stratford-on-Avon. In Search of Shakespeare Part 5 Bonus Episode. Morgan Freeman "All The World's A Stage" Shakespeare. Mysteries of Shakespeare's tomb: what the investigation revealed. Romeo and Juliet (1968) Trailer. 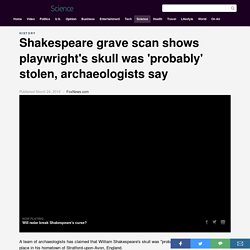 The conclusion brings new credence to a long-discredited claim that the skull was stolen from the playwright's grave by trophy hunters in 1794. "We came across this very odd, strange thing at the head end," lead archaeologist Kevin Colls, of Staffordshire University, told The Guardian. "It was very obvious, within all the data we were getting, that there was something different going on at that particular spot. We have concluded it is signs of disturbance, of material being dug out and put back again. " Shakespeare's grave famously bears the poetic admonition, "Good friend, for Jesus’ sake forbear, / To dig the dust enclosed here. / Blessed be the man that spares these stones, / And cursed be he that moves my bones. 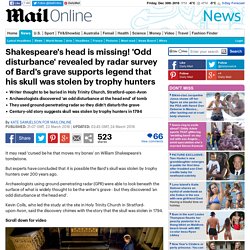 But experts have concluded that it is possible the Bard's skull was stolen by trophy hunters over 200 years ago. Archaeologists using ground-penetrating radar (GPR) were able to look beneath the surface of what is widely thought to be the writer's grave - but they discovered 'an odd disturbance at the head end'. A story often dismissed as wild fiction, that 18th-century grave robbers stole Shakespeare’s skull, appears to be true, archaeologists have said. 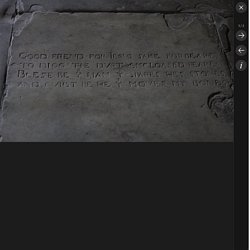 The first archaeological investigation of Shakespeare’s grave at Holy Trinity church in Stratford-on-Avon has been carried out for a documentary to be broadcast by Channel 4 on Saturday. The most striking conclusion is that Shakespeare’s head appears to be missing and that the skull was probably stolen from what is a shallow grave by trophy hunters. Kevin Colls, the archaeologist who led the team, said the grave was not as they had expected. “We came across this very odd, strange thing at the head end. It was very obvious, within all the data we were getting, that there was something different going on at that particular spot.

There is also “a very strange brick structure” that cuts across the head end of the grave, he said. Shakespeare: Original pronunciation. The Language of Shakespeare. Language Links | Home The most striking feature of Shakespeare is his command of language. 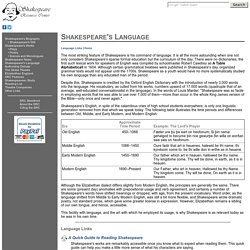 It is all the more astounding when one not only considers Shakespeare's sparse formal education but the curriculum of the day. There were no dictionaries; the first such lexical work for speakers of English was compiled by schoolmaster Robert Cawdrey as A Table Alphabeticall in 1604. Although certain grammatical treatises were published in Shakespeare's day, organized grammar texts would not appear until the 1700s.