NBC - NeXT Byte Codes, Not eXactly C, and SuperPro C 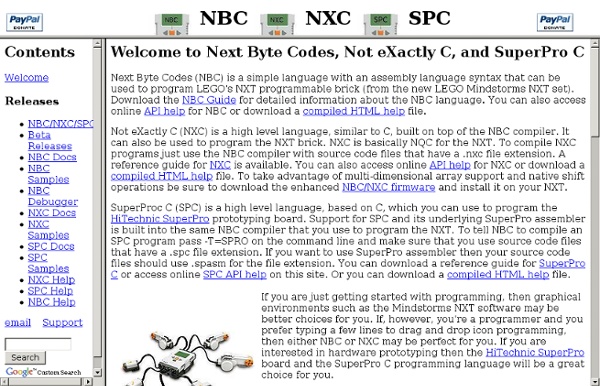 Free Lego NXT MindStorms NXT-G Robotics Challenges Tutorials At the request of Tasmanian teachers Miss Clare Neilson and recently retired Mrs. Juanita Airey, activities using LEGO's NXT 1 MindStorms Robots have been developed for use in School-based 2-hour sessions. Some, but not all, will work with the new NXT 2 kit (click here for more information). The tutorials are presented as a series of Challenges, which are gradually being converted for Web use. Challenges with an "M" after the challenge number include mentor notes.

Nano Basic Download on AppStore. Free Turn your mobile device into a real computer What makes a computer a computer? Actually, it follows from its name, derived from the word compute - compute. Yes, he has to calculate. Programmable Brick Utilities Programmable Brick Utilities NOTE: You must have the Fantom drivers installed in order for any of my NXT utilities to function under Mac OSX and Windows. You can get a copy of these drivers from the LEGO.com MINDSTORMS Update page.

nth-graph - nth-graph, a graph based programming scheme nth-graph "Diagrams" convey a network (or graph) structure of nodes and edges. Our eyes have a high-bandwidth capacity to understand a diagram's structure. "Text" conveys rich meaning through words. NXT Tutorial This tutorial for LEGO Mindstorms NXT is divided in two sections. The “Essentials” are things every NXT programmer should know. Some of these movies have exercises directly under them. xowiki Announcement: Next Scripting Framework 2.0.0 available January 01, 2015 We are pleased to announce the release of the NSF/NX/XOTcl 2.0.0 (Download ). Enchanting : Enchanting : Enchanting Enchanting Cards in Multiple Languages Enchanting cards are now available in: Thank you, translators, for your hard work! Enchanting v0.2 is out!

Napier88 - SystemsResearch From SystemsResearch Napier88 is a persistent programming language named after John Napier. The Language List of NXT Compatible Bluetooth Dongles I originally posted this list to the NXT Step, but I’m posting here to make it easier to find. Updates will be posted to this page on Robot Square only. This page is a list of Bluetooth Dongles that are confirmed to be compatible with the NXT. Contributions were made to NXT owners from around the world, so keep in mind that this is not an official list. There may be many more compatible Bluetooth sticks, of course, but this is just a suggested list. If you have a different Bluetooth stick that works, add it to this list.

noop - A new object-oriented programming language focusing on maintainability Noop (pronounced noh-awp, like the machine instruction) is a new language experiment that attempts to blend the best lessons of languages old and new, while syntactically encouraging what we believe to be good coding practices and discouraging the worst offenses. Noop is initially targeted to run on the Java Virtual Machine. Right now, we are in an early design and development phase. You can't code anything interesting in Noop yet. Our experience has been that developers often create code that's hard to test and maintain, without realizing it. On a large software project, this can create problems later on for the whole team.

Tutorials: Official MINDSTORMS NXT 2.0 Bonus Models With the help from the Mindstorms Community Partners (MCP), LEGO has released several bonus models for the NXT 2.0 set. However, they are not easily found on the LEGO website. This page is a collection of pictures and links to the bonus projects. Robot Square does not host the instructions or programs. Credits (and questions) go to the original designers. Requirements: