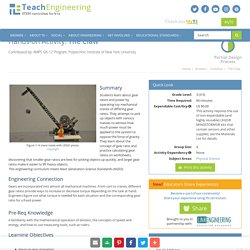 They attempt to pick up objects with various masses to witness how much power must be applied to the system to oppose the force of gravity. They learn about the concept of gear ratio and practice calculating gear ratios on worksheets, discovering that smaller gear ratios are best for picking objects up quickly, and larger gear ratios make it easier to lift heavy objects. This engineering curriculum meets Next Generation Science Standards (NGSS). Engineering Connection Gears are incorporated into almost all mechanical machines. Pre-Req Knowledge A familiarity with the mathematical operation of division, the concepts of speed and energy, and how to use measuring tools, such as rulers. Learning Objectives After this activity, students should be able to: More Curriculum Like This. A Week In the Life #5: Vroom, Vroom, Up, Up, and Away! – LEGO Engineering.

This is the sixth of probably fourteen in a series of posts, each chronicling in detail the ins and outs of my Robotics class on a weekly basis. 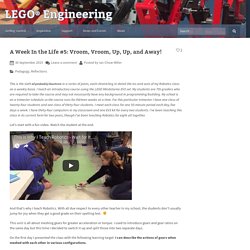 I teach an introductory course using the LEGO Mindstorms EV3 set. My students are 7th graders who are required to take the course and may not necessarily have any background in programming/building. My school is on a trimester schedule so the course runs for thirteen weeks at a time. For this particular trimester I have one class of twenty-four students and one class of thirty-four students. I meet each class for one 50-minute period each day, five days a week. LEGO MOCs with Building Instructions. Education. Lego Technic 6-speed gearbox w/ instructions. Lego Technic 4 Speed Gear Change Transmission.wmv. Cambio di Lego a 2 marce (tutorial) LEGO Tracked Crane (9391) Power Trailer Modification. 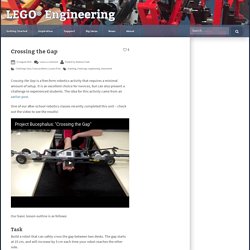 It is an excellent choice for novices, but can also present a challenge to experienced students. The idea for this activity came from an earlier post. One of our after-school robotics classes recently completed this unit – check out the video to see the results! Our basic lesson outline is as follows: Task Build a robot that can safely cross the gap between two desks. Props Two desks (or other movable raised surfaces) and a soft floor! Warning: Robots WILL hit the ground during this activity. Challenge Rules There are no instructions or examples provided.No human assistance is allowed.Students operate with limited parts (a single MINDSTORMS kit) and time (as defined by teacher).All Robots must start ENTIRELY on one table.Robots must cross the gap to reach the other table, then stop without falling off!

Design and Planning Where is the robot’s tipping point? Activity I hope you find this useful. Dr. E's WeDo Challenges. The Maze Challenge: Great for all levels and ages – LEGO Engineering. I teach several classes and camps for kids ages 8-14 using Mindstorms EV3/NXT. 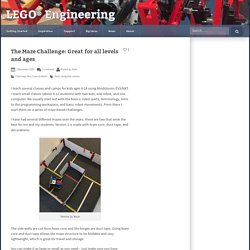 I teach small classes (about 8-12 students) with two kids, one robot, and one computer. We usually start out with the basics: robot parts, terminology, intro to the programming workspace, and basic robot movements. From there I start them on a series of maze-based challenges. I have had several different mazes over the years, there are two that work the best for me and my students. Version 1 is made with foam core, duct tape, and decorations: The side walls are cut from foam core and the hinges are duct tape.

You can make it as large or small as you need – just make sure you have enough space for the robot to travel and turn without hitting the walls (~15 inches wide for the LEGO Education Robot Educator Model), and that the walls are high enough (~12 inches) for a ultrasonic sensor to detect it. The Maze Challenge: Great for all levels and ages – LEGO Engineering. Challenge Idea – LEGO Engineering. Robotica Educativa Lego WeDo 2.0 Eduardo Ventura AulaRobótica. Lego WeDo 2.0 Rocket Launcher Lanzacohetes. Eo's LEGO Designs. LEGO, MINDSTORMS and LEGO TECHNIC are trademarks of the LEGO Group, which does not sponsor, authorize or endorse this site. 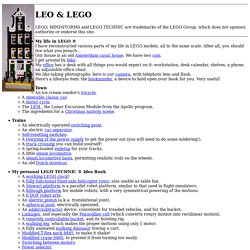 My life in LEGO ® I have reconstructed various parts of my life in LEGO models, all to the same scale. After all, you should live what you preach... Our house is an old Amsterdam canal house. We have two cats. I get around by bike. LEGO has its own homepage: www.lego.com, and a page on the MINDSTORMS(tm) system. Clock. I made a clock out of LEGO, which works nicely. 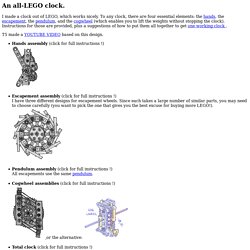 To any clock, there are four essential elements: the hands, the escapement, the pendulum, and the cogwheel (which enables you to lift the weights without stopping the clock). Instructions for those are provided, plus a suggestions of how to put them all together to get one working clock . T5 made a YOUTUBE VIDEO based on this design. Machines & Mechanisms Building Instructions – Support – LEGO Education. LEGO Gravity Rollers: A Fun Contraption That Propels Itself! - Frugal Fun For Boys and Girls. Here’s a neat LEGO project that will allow kids to explore the concepts of gravity, mass, force, and momentum, all while playing with LEGO bricks! 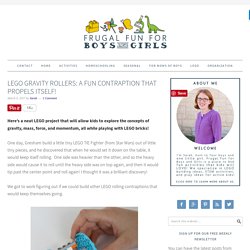 One day, Gresham build a little tiny LEGO TIE Fighter (from Star Wars) out of little tiny pieces, and he discovered that when he would set it down on the table, it would keep itself rolling. One side was heavier than the other, and so the heavy side would cause it to roll until the heavy side was on top again, and then it would tip past the center point and roll again!

Lego Safe version 2: a littleBits Project by richardvanpham. LEGO® WeDo designs for the busy teacher: WeDo 2.0. Programming Lego WeDo 2.0 with Tynker. This is a quick-start guide to program your Lego WeDo 2.0 with the Tynker App. 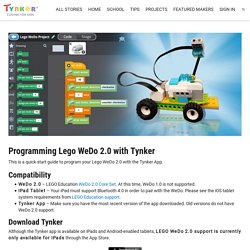 Compatibility WeDo 2.0 – LEGO Education WeDo 2.0 Core Set. At this time, WeDo 1.0 is not supported.iPad Tablet – Your iPad must support Bluetooth 4.0 in order to pair with the WeDo. Please see the iOS tablet system requirements from LEGO Education support.Tynker App – Make sure you have the most recent version of the app downloaded. Old versions do not have WeDo 2.0 support. Download Tynker Although the Tynker app is available on iPads and Android-enabled tablets, LEGO WeDo 2.0 support is currently only available for iPads through the App Store. Wedobots: LEGO® WeDo designs for the busy teacher: WeDo 2.0. LEGO Building Challenge: Summer STEM Week 1 Camp. Welcome to week 1 of our 100 days of Summer STEM activities for kids series where we go week by week with a different theme all summer long! 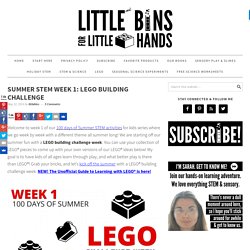 We are starting off our summer fun with a LEGO building challenge week. You can use your collection of LEGO® pieces to come up with your own versions of our LEGO® ideas below! My goal is to have kids of all ages learn through play, and what better play is there than LEGO®! Grab your bricks, and let’s kick off the summer with a LEGO® building challenge week. Soil Layers Activity With LEGO for Kids Earth Science STEM.

Learn about the layers of soil with a fun hands-on LEGO activity. 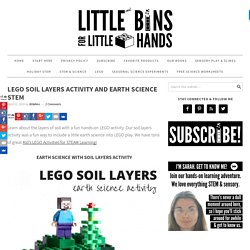 Our soil layers activity was a fun way to include a little earth science into LEGO play. We have tons of great Kid’s LEGO Activities for STEAM Learning! The other day we used our LEGO bricks to make a slice of the Earth and check out the LAYERS OF THE EARTH! I love using basic bricks to learn about new things. LEGO Building Challenge for Kids: Brain Puzzles - Frugal Fun For Boys and Girls. LEGO Brain Puzzles! This open-ended LEGO building challenge is perfect for a LEGO club, class, or group. WeDoUser. Wedobots: LEGO® WeDo designs for the busy teacher. Gears. LEGO: Amazing Mechanisms: Dancing Birds: Lesson 1 - Cottonwood Elementary Technology Department. Lego Mechanisms. Five or ten years ago, when I started working with the tinkering studio, there were legos all over the place.

Many of the earliest tinkering workshops developed as part of the PIE Network found ways to incorporate Pico Cricket technology and combine explorations of natural phenomenon with in-depth investigations of logo programming and lego mechanisms. As the group shifted focus from intensive professional development workshops to drop-in experiences suitable for the museum floor, the complications of these lego based elements took a back seat to designing activities, facilitation, and environments to support direct tinkering with materials and phenomenon. But recently, some strands of work have come together to reignite our interest in developing legos as a method of prototyping and resource for workshops. We started off with some research into mechanisms, both lego and otherwise.

Make Your Own LEGO Skeleton Clock. LEGO Mini Clock. LEGO® Chemical Reactions. Easy LEGO Catapult Tension Experiment STEM Activity. Right before bed last night, my son asked to build a “castle catapult” out of LEGO®. Terrific, I thought, but time for bed! What do you know bright and early, he’s ready to make one.  Christmas Marble Maze LEGO STEM Activity for Kids. The 25 Days of Christmas STEM Countdown continues with a LEGO challenge! Build a Christmas marble maze. Can you make it from one end to the other? LEGO Tessellation STEAM Activity for Kids. LEGO Activities and STEAM Challenges for Kids. As my son has gotten older, LEGO activities have taken center stage in much of our play and learning time.