Board Observers Weekly - March 4th, 2014. Facebook and Tesla Are Winning Wall Street Because They Make the Biggest Bets. Photo: Scott Eells/Bloomberg via Getty This week, shares in Google, Facebook, and Tesla reached an all-time high on Wall Street, helping push the NASDAQ to its tallest peak since the dot-com crash 14 years ago. 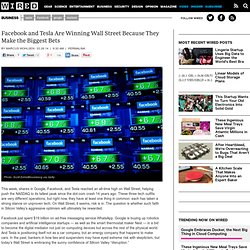 These three tech outfits are very different operations, but right now, they have at least one thing in common: each has taken a strong stance on unproven tech. The Future of the News Business: A Monumental Twitter Stream All in One Place. I am more bullish about the future of the news industry over the next 20 years than almost anyone I know. 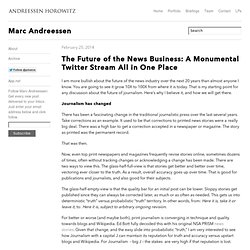 You are going to see it grow 10X to 100X from where it is today. That is my starting point for any discussion about the future of journalism. Here’s why I believe it, and how we will get there. Journalism has changed. The Apple Tesla Connection: Fun and Reason With Numbers. Apple acquiring Tesla would make for juicy headlines but would also be very dangerous. There are more sensible ways for the two companies to make money together. Apple has never suffered from a lack of advice. As long as I can remember — 33 years in my case — words of wisdom have rained down upon the company, and yet the company stubbornly insists on following its own compass instead of treading a suggested path. (Actually, that’s not entirely true. A rudderless, mid-nineties Apple yielded to the pressure of pundit opinion and licensed its Mac OS to Power Computing and Motorola… and promptly lost its profits to Mac clones. Now that Jobs is no longer with us and Apple’s growth has slowed, the advice rain is more intense than ever… and the pageviews netwalkers are begging for traffic.

The visionary sheep point to the titanic deals that other tech giants can’t seem to resist: Google buys Nest for $3.3B; Facebook acquires WhatsApp for $16B (or $19B, depending on what and how you count). The Social Conglomerate. When news of the Facebook/WhatsApp deal broke, a lot of people gave me credit for being prescient: after all, I had just written 1,568 words on why messaging was mobile’s killer app. 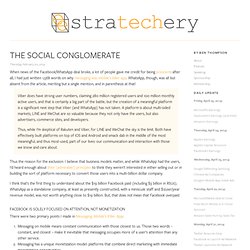 WhatsApp, though, was all but absent from the article, meriting but a single mention, and in parenthesis at that! Viber does have strong user numbers, claiming 280 million registered users and 100 million monthly active users, and that is certainly a big part of the battle, but the creation of a meaningful platform is a significant next step that Viber (and WhatsApp) has not taken. A platform is about multi-sided markets; LINE and WeChat are so valuable because they not only have the users, but also advertisers, commerce sites, and developers. Thus, while I’m skeptical of Rakuten and Viber, for LINE and WeChat the sky is the limit. Thus the reason for the exclusion: I believe that business models matter, and while WhatsApp had the users, I’d heard enough about their (admirable!) Should Startups Focus on Profitability or Not? There are certain topics that even some of the best journalists can’t fully grok. 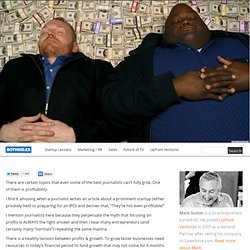 One of them is profitability. I find it amusing when a journalist writes an article about a prominent startup (either privately held or preparing for an IPO) and decries that, “They’re not even profitable!” I mention journalists here because they perpetuate the myth that focusing on profits is ALWAYS the right answer and then I hear many entrepreneurs (and certainly many “normals”) repeating the same mantra. There is a healthy tension between profits & growth. To grow faster businesses need resources in today’s financial period to fund growth that may not come for 6 months to a year. If you hire 6 sales reps in January at $120,000 / year salary then you’ve taken on an extra $60,000 per month in costs yet these sales people might not close new business for 4-6 months.

I know this seems obvious but I promise you that even smart people forget this when talking about profitability. A six-step framework to make strategic decisions. Any number of challenges can arise during a startup’s initial years. 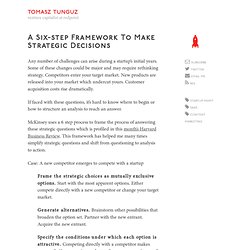 Some of these changes could be major and may require rethinking strategy. Competitors enter your target market. New products are released into your market which undercut yours. Customer acquisition costs rise dramatically. If faced with these questions, it’s hard to know where to begin or how to structure an analysis to reach an answer. McKinsey uses a 6 step process to frame the process of answering these strategic questions which is profiled in this month’s Harvard Business Review. Case: A new competitor emerges to compete with a startup Frame the strategic choices as mutually exclusive options. 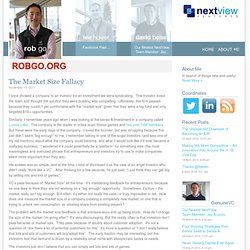 This investor loved the team and thought the solution they were building was compelling.