The Great Race. The Great Race et ses modules : Explication et analyse du jeu. Flotilla. In 1954, with an explosion over a hundred thousand times more powerful than even the wildest estimates, the Castle Bravo nuclear test obliterated the Bikini Atoll, and ruptured the Earth down to its mantle. 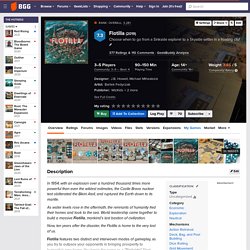 As water levels rose in the aftermath, the remnants of humanity fled their homes and took to the sea. World leadership came together to build a massive Flotilla, mankind’s last bastion of civilization. Now, ten years after the disaster, the Flotilla is home to the very last of us. Flotilla features two distinct and interwoven modes of gameplay, as you try to outpace your opponents in bringing prosperity to humanity’s new home. You begin the game as a “Sinkside” Fleet Commander, commissioned by world leaders to explore the new face of the ocean, scour the depths for resources, and rescue any survivors you come across. The choice of if or when to switch from a “Sinkside” explorer to a “Skyside” settler defines the very core experience of Flotilla. Flotilla : Explication et analyse du jeu. Tawantinsuyu: The Inca Empire. The great Sapa Inca Pachacuti turned to his offspring and ordered them to worship Inti, the Sun God, and to expand the Inca Empire as far as the llamas roam. 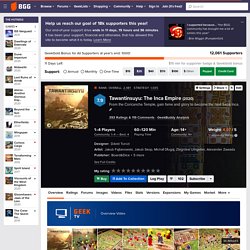 With Chinchaysuyu, Antisuyu, Qullasuyu, and Kuntisuyu — the four regions of the new empire — now ripe for conquest, the time has come for Pachacuti's true successor to arise. Gather your people from the villages below and use their unique abilities to strategically place them where they can perform the greatest tasks for you. Climb the steps of the Sun Temple, reaping the rewards of your piety.

Build structures that both nourish your people and provide you with benefits no other has at their disposal. Tawantinsuyu : Explication et analyse du jeu. The Artemis Project. Europa, Jupiter's moon. 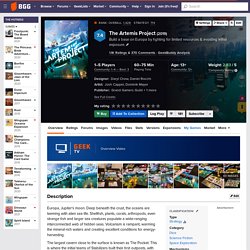 Deep beneath the crust, the oceans are teeming with alien sea life. Shellfish, plants, corals, arthropods, even strange fish and larger sea creatures populate a wide-ranging interconnected web of hidden seas. Volcanism is rampant, warming the mineral-rich waters and creating excellent conditions for energy-harvesting. Artemis Project : Explication et analyse du jeu. Obsession: Upstairs, Downstairs. Obsession 2020 & Upstairs Downstairs : Explication et analyse complète. Monumental. In Monumental, each player will control a civilization that will evolve through his city: a grid of 3x3 cards (coming out from the player's starting civilization deck) that can each be activated to gather various resources such as Science, Military, Production, Culture, and Gold that will allow them to trigger many actions. 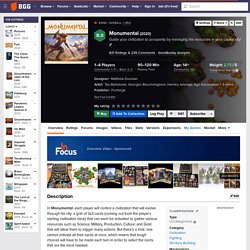 But there’s a trick: one cannot activate all their cards at once, which means that tough choices will have to be made each turn in order to select the cards that are the most needed. The resources gathered from the activated city cards will allow the players to acquire cards from a common pool, allowing them to get improved buildings, technologies, wonders, etc. and therefore to leverage their civilization deck to new heights through more and more efficient card combos. A modular board, at the center of the table, holds each civilization's army. The board is made of Provinces to be conquered. —description based on the publisher's.

Monumental : Explication et analyse du jeu. The Magnificent. The Magnificent is a tightly designed Eurogame from the creators of Santa Maria set in a mystical world beautifully illustrated by French artist Martin Mottet. 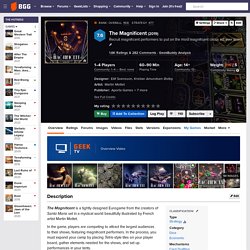 In the game, players are competing to attract the largest audiences to their shows, featuring magnificent performers. In the process, you must expand your camp by placing Tetris-style tiles on your player board, gather elements needed for the shows, and set up performances in your tents. The Magnificent : Explication et analyse du jeu. Free Market: NYC. FREE MARKET: NYC is a competitive and strategic board game based on the principles of a free market economy, presented from a humorous and ironic perspective of life. 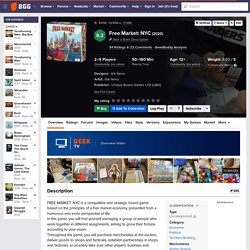 In this game, you will find yourself managing a group of people who work together in different assignments, aiming to grow their fortune according to your vision. Throughout the game, you will purchase merchandise at the auction, deliver goods to shops and factories, establish partnerships in shops and factories, or possibly take over other players' business and capital. You will also attend events, influence politics, win awards, and garner all kinds of influence to help your businesses, partnerships, and assets flourish as you move forward in the game. The trick is simple: buy when the market is low and sell when it's high to make the most profit before your opponents do. 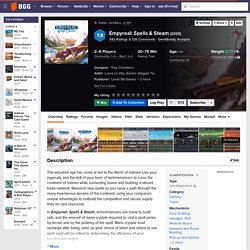 Use your ingenuity and the skill of your team of technomancers to cross the continent of Indines while connecting towns and building a vibrant trade network. Research new spells as you carve a path through the many treacherous terrains of the continent, using your company's unique advantages to outbuild the competition and secure supply lines for rare resources. Empyreal spells and steam : Explication et analyse du jeu.

Bios: Origins (Second Edition) Bios:Origins is the 3rd part of the Bios Trilogy. 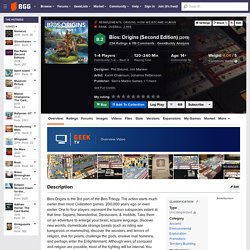 The action starts much earlier than most Civilization games: 200,000 years ago or even earlier. One to four players represent the human subspecies extant at that time: Sapiens, Neanderthal, Denisovans, & Hobbits. Take them on an adventure to enlarge your brain, acquire language, discover new worlds, domesticate strange beasts (such as riding war kangaroos or mammoths), discover the wonders and terrors of religion, dive for pearls, challenge the gods, enslave rival hominins, and perhaps enter the Enlightenment. Although wars of conquest and religion are possible, most of the fighting will be internal. You have only limited control of over your ruling class, and if your priests are in control and do a poor job, they will get killed and usurped by merchants or warlords.

Bios Origins : Fonctionnement et analyse du jeu. Circadians: First Light. We were light years from our home, galaxies away, when we first discovered this ancient celestial body — a planet filled with intriguing, intelligent lifeforms, not too unlike our own. 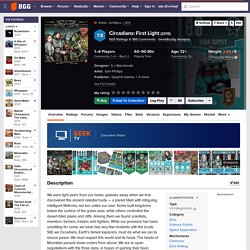 Some built kingdoms below the surface of the green seas, while others controlled the desert-filled plains and cliffs. Among them we found scientists, inventors, farmers, traders and fighters. While our presence has been unsettling for some, we have had very few incidents with the locals. Still, we Circadians, Earth's famed explorers, must do what we can to ensure peace. We must respect this world and its hosts. The aim of Circadians: First Light is to lead a team of researchers on the planet of Ryh. 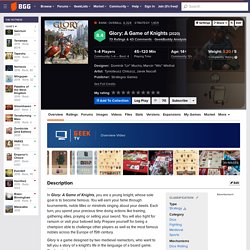 You will earn your fame through tournaments, noble titles or minstrels singing about your deeds. Each turn, you spend your precious time doing actions like training, gathering allies, praying or selling your sword. You will also fight for ransom or visit your beloved lady. Prepare yourself for being a champion able to challenge other players as well as the most famous nobles across the Europe of 15th century. Glory is a game designed by two medieval reenactors, who want to tell you a story of a knight's life in the language of a board game. Two main modes for different experience and player types - with or without pvp combat worker-placement-like preparation phase, quest phase based on gathered quest cards, tournaments as a main source of victory points, duels as a fast mini-game titles to gather as a secondary source of victory points - public and private - changing with every game.

[Proto-KS] Glory a game of knights : Explication et analyse du jeu. Eclipse: Second Dawn for the Galaxy. A game of Eclipse places you in control of a vast interstellar civilization, competing for success with its rivals. You explore new star systems, research technologies, and build spaceships with which to wage war. There are many potential paths to victory, so you need to plan your strategy according to the strengths and weaknesses of your species, while paying attention to the other civilizations' endeavors. Eclipse Second dawn for the galaxy : explication et analyse du jeu. Barrage. In the dystopic 1930s, the industrial revolution pushed the exploitation of fossil-based resources to the limit, and now the only thing powerful enough to quench the thirst for power of the massive machines and of the unstoppable engineering progress is the unlimited hydroelectric energy provided by the rivers.

Barrage is a resource management strategic game in which players compete to build their majestic dams, raise them to increase their storing capacity, and deliver all the potential power through pressure tunnels connected to the energy turbines of their powerhouses. Each player represents one of the four international companies who are gathering machinery, innovative patents and brilliant engineers to claim the best locations to collect and exploit the water of a contested Alpine region crossed by rivers.

Barrage includes two innovative and challenging mechanisms. Barrage : Explication et analyse du jeu. Obsession. You are the head of a respected but troubled family estate in mid-19th century Victorian England. After several lean decades, family fortunes are looking up! Your goal is to improve your estate so as to be in better standing with the truly influential families in Derbyshire. Obsession is a game of 16 to 20 turns in which players build a deck of Victorian gentry (British social upper class), renovate their estate by acquiring building tiles from a centralized builders' market, and manipulate an extensive service staff of butlers, housekeepers, underbutlers, maids, valets, and footmen utilizing a novel worker placement mechanic.

Successfully hosting prestigious social activities such as Fox Hunts, Music Recitals, Billiards, Political Debates, and Grand Balls increases a player's wealth, reputation, and connections among the elite. Each turn, players choose a building tile representing a room or outdoor space in and around their 19th century British country house. Obsession : explication et analyse du jeu. Tekhenu: Obelisk of the Sun. Four millennia ago on the eastern bank of the Nile river was laid the foundation of the Temple of Amun-Ra. Over the course of two thousand years, the temple complex was gradually expanded and became widely known as "The Most Select of Places" (Ipet-Isut), boasting the largest religious building in the world. Today, the site is known as Karnak, located at Luxor in modern-day Egypt. Tekhenu : Explication et analyse du jeu. City of the Big Shoulders.

After the great Chicago Fire of 1871, the brave men and women of Chicago sought to rebuild their once-great city, and rebuild it they did. Over the next 60 years Chicago experienced an economic golden age, making such great progress that it hosted The World's Columbian Exposition in 1893, followed not long after by a celebration of its Century of Progress at The World's Fair in 1933. Many of the household brands we've come to know and love today had their start in Chicago during this time period; Oscar Mayer, Kraft, Quaker Oats, Nabisco, Swift & Co, Armour & Co, Schwinn Bicycles, Charles Schwab, and many others made a home here in this tall, bold slugger. In City of the Big Shoulders players take on the roles of entrepreneurs and investors seeking to rebuild Chicago into a city fit for the world stage.

Although City of the Big Shoulders features a large amount of strategic depth and rewarding gameplay, it does so in a shorter timeline than is typical of most heavy economic games. City of the Big Shoulders : Explication et analyse du jeu. Kanban: Driver's Edition. "Kanban" — or 看板, the Japanese word for billboard — is a term for the visual cues that might be used in a lean, efficient assembly line in order to expedite and smooth workflow.