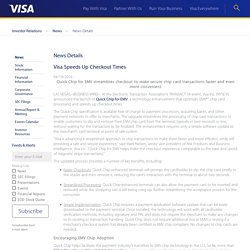 The Quick Chip specification is available free-of-charge to payment processors, acquiring banks, and other payment networks to offer to merchants. MasterCard plans to turn every gadget into a credit card. It appears that we are in the midst of a mobile payment revolution. 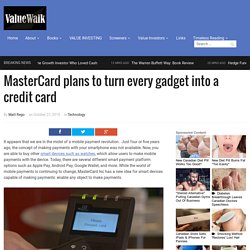 Just four or five years ago, the concept of making payments with your smartphone was not available. Now, you are able to buy other smart devices such as watches, which allow users to make mobile payments with the device. Today, there are several different smart payment platform options such as Apple Pay, Android Pay, Google Wallet, and more. Visa plans to use smartphone tracking to prevent credit card fraud. Visa wants to put an end to those annoying calls you sometimes get from your bank when buying things far from home. 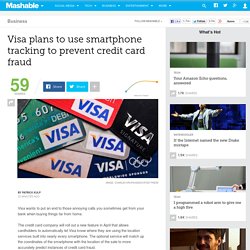 The credit card company will roll out a new feature in April that allows cardholders to automatically let Visa know where they are using the location services built into nearly every smartphone. The optional service will match up the coordinates of the smartphone with the location of the sale to more accurately predict instances of credit card fraud. To set up the location tracker, Visa has made deals with card-issuing banks to add the option to their mobile banking apps.

Over time, the location service will plot out a home range with a radius of about 50 miles. If the customer leaves that territory, the tracker will send that information to Visa, and the company will be less likely to flag that card for fraud when purchases are made. While the idea of a credit card company tracking your every move may sound disconcerting, some Additional reporting by the Associated Press.

What paying with plastic says about you. Ways that Boomers show their age: wearing sensible shoes, relying on reading glasses and paying for a cup of coffee with cash. 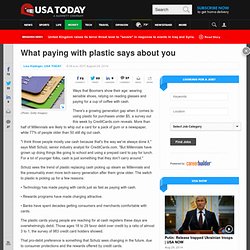 Mobile Payments & the Under $5 Cash Purchase 08/29/2014. To hit its stride, maybe mobile payments will have to replace the idea of using cash more than credit or debit cards. 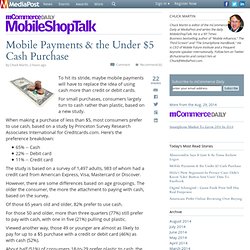 For small purchases, consumers largely turn to cash rather than plastic, based on a new study. When making a purchase of less than $5, most consumers prefer to use cash, based on a study by Princeton Survey Research Associates International for Creditcards.com. Poll: Cash or card for $5 purchase? By Martin Merzer A cup of coffee. 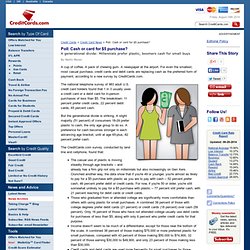 A pack of chewing gum. A newspaper at the airport. For even the smallest, most casual purchase, credit cards and debit cards are replacing cash as the preferred form of payment, according to a new survey by CreditCards.com. A Startup That's Building a Universal Credit Card. As the contactless payment technologies, from Google (GOOG) Wallet to Isis, flounder, critics point to what now seems rather obvious: Silicon Valley is trying to fix a system that isn’t broken. 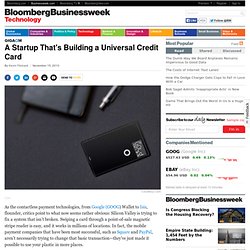 Swiping a card through a point-of-sale magnetic stripe reader is easy, and it works in millions of locations. In fact, the mobile payment companies that have been most successful, such as Square and PayPal, aren’t necessarily trying to change that basic transaction—they’ve just made it possible to use your plastic in more places. Kanishk Parashar learned that lesson the hard way. The PayPal (EBAY) veteran developed a smartphone wallet app in 2010 called Smart Market that went nowhere. Card and Mobile Payment Industry Statistics. Nilson_Purcvh_Vol_Market_Shares_2013February.jpg (JPEG Image, 326 × 600 pixels) P.F. Chang’s turns to vintage 1970s tech after credit card breach. 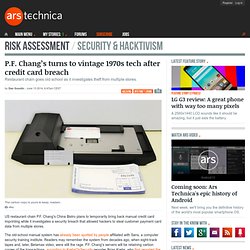 Chang's China Bistro plans to temporarily bring back manual credit card imprinting while it investigates a security breach that allowed hackers to steal customer payment card data from multiple stores. The old-school manual system has already been spotted by people affiliated with Sans, a computer security training institute. Readers may remember the system from decades ago, when eight-track tapes and, later, Betamax video, were still the rage. P.F. Chang's servers will be retaining carbon copies of the transactions, according to KrebsOnSecurity reporter Brian Krebs, who first reported the breach three days ago after finding that thousands of newly stolen credit and debit cards for sale in underground forums were all used at the chain.

'More card use' for low-value buys. 11 August 2014Last updated at 10:21 ET Online shopping is one factor behind the increased use of debit cards The amount of money spent with each use of a debit or credit card is falling as shoppers buy smaller items and digital content online, a trade body has said. 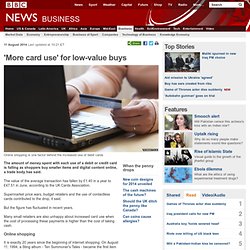 The value of the average transaction has fallen by £1.40 in a year to £47.51 in June, according to the UK Cards Association. Supermarket price wars, budget retailers and the use of contactless cards contributed to the drop, it said. Mastercard fees were anti-competitive, court upholds. 11 September 2014Last updated at 06:47 ET The European Court of Justice has upheld a ruling that fees charged by Mastercard were anti-competitive. 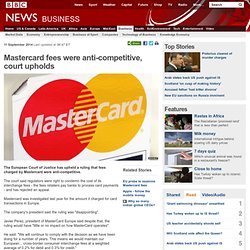 The court said regulators were right to condemn the cost of its interchange fees - the fees retailers pay banks to process card payments - and has rejected an appeal. Mastercard was investigated last year for the amount it charged for card transactions in Europe. The company's president said the ruling was "disappointing". Javier Perez, president of MasterCard Europe said despite that, the ruling would have "little or no impact on how MasterCard operates".