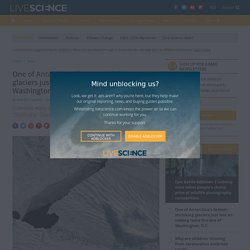 Scientists at Copernicus, the European Union’s Earth observation program, have been closely monitoring the glacier since large cracks appeared near its edge in October 2019. Yesterday, those cracks finally cut a chunk of the glacier away (a process known as calving), releasing a giant jigsaw puzzle of fresh icebergs into the nearby Amundsen Sea. In total, the icebergs measure about twice the size of Washington, D.C., in area (more than 130 square miles, or 350 square kilometers), according to The Washington Post. Plastic straws will be banned in the UK from April 2020. □□□□□ □□□□□□□ on Instagram: “We really need to stop using up trees unnecessarily - not only does it cause soil erosion and increase flooding, it also hampers our…” Climate change: UK 'can cut emissions to nearly zero' by 2050. Image copyright PA The UK should lead the global fight against climate change by cutting greenhouse gases to nearly zero by 2050, a report says. 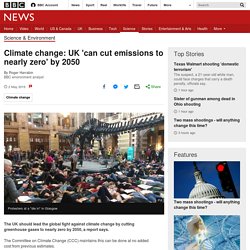 The Committee on Climate Change (CCC) maintains this can be done at no added cost from previous estimates. Its report says that if other countries follow the UK, there’s a 50-50 chance of staying below the recommended 1.5C temperature rise by 2100. A 1.5C rise is considered the threshold for dangerous climate change. Some say the proposed 2050 target for near-zero emissions is too soft, but others will fear the goal could damage the UK's economy.

The CCC - the independent adviser to government on climate change - said it would not be able to hit “net zero“ emissions any sooner, but 2050 was still an extremely significant goal. The main author Chris Stark told me: “This report would have been absolutely inconceivable just a few years ago. Inside the climate change lawsuit pitting Big Oil against San Francisco and Oakland. Fracking commissioner resigns after six months. The UK's shale gas commissioner is resigning after just six months, saying fracking is being throttled by rules preventing mini earthquakes. 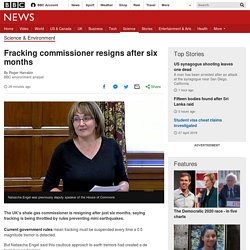 Global carbon emissions from energy hit a record high in 2018. Plastic pollution found in creatures at inshore coral reef. Fragments of fishing equipment and microplastics have been found inside animals living on Scotland's only inshore deep-water coral reef. 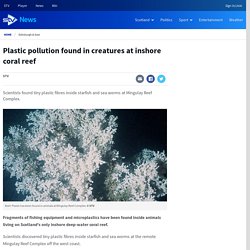 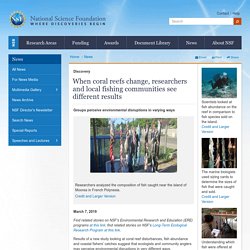 Results of a new study looking at coral reef disturbances, fish abundance and coastal fishers' catches suggest that ecologists and community anglers may perceive environmental disruptions in very different ways. The apparent disconnect between data-driven scientists and experience-driven fishing communities has implications for the management and resilience of coral reefs and other sensitive marine ecosystems. The findings are published this week in the journal Ambio. Climate change is killing off Earth’s little creatures. Climate change gets blamed for a lot of things these days: inundating small islands, fueling catastrophic fires, amping-up hurricanes and smashing Arctic sea ice. 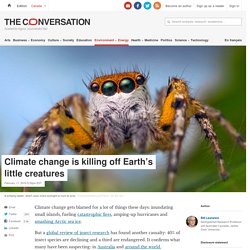 But a global review of insect research has found another casualty: 40% of insect species are declining and a third are endangered. It confirms what many have been suspecting: in Australia and around the world, arthropods – which include insects, spiders, centipedes and the like — appear to be in trouble. Read more: Curious Kids: why do spiders have hairy legs? The global review comes hard on the heels of research published in the Proceedings of the National Academy of Sciences USA that suggests a potent link between intensifying heat waves and stunning declines in the abundance of arthropods. If that study’s findings are broadly valid – something still far from certain – it has chilling implications for global biodiversity. Earth Once Swallowed Its Own Superocean. Could It Happen Again? The ancient supercontinent of Rodinia turned inside out as the Earth swallowed its own ocean some 700 million years ago, new research suggests. 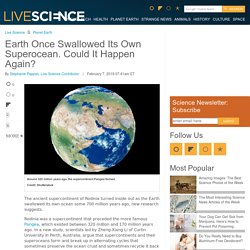 Rodinia was a supercontinent that preceded the more famous Pangea, which existed between 320 million and 170 million years ago. In a new study, scientists led by Zheng-Xiang Li of Curtin University in Perth, Australia, argue that supercontinents and their superoceans form and break up in alternating cycles that sometimes preserve the ocean crust and sometimes recycle it back into Earth's interior.

“Bright words:” finding common ground in environmental negotiations. We cannot create what we cannot imagine, and to imagine we need stories and words to tell them. 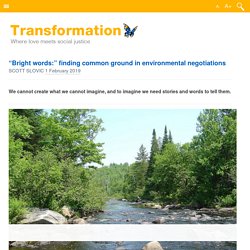