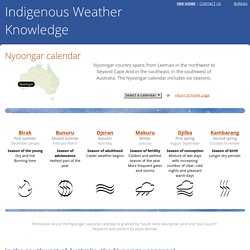 The Nyoongar calendar includes six seasons. Permission to use the Nyoongar seasonal calendar is granted by "South West Aboriginal Land and Sea Council". Research and content by Jason Barrow. In the southwest of Australia, the Nyoongar seasonal calendar includes six different seasons in a yearly cycle These are Birak, Bunuru, Djeran, Makuru, Djilba and Kambarang. The Nyoongar seasons can be long or short and are indicated by what is happening and changing around us rather than by dates on a calendar. This six season calendar is extremely important to Nyoongar people, as it is a guide to what nature is doing at every stage of the year, as well as understanding respect for the land in relation to plant and animal fertility cycles and land and animal preservation. 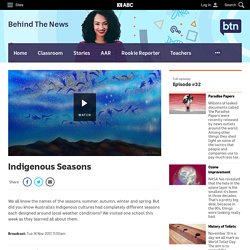 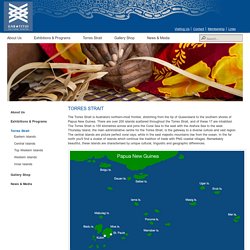 There are over 200 islands scattered throughout the Torres Strait, and of these 17 are inhabited. The Torres Strait is 150 kilometres across and joins the Coral Sea to the east with the Arafura Sea to the west. Thursday Island, the main administrative centre for the Torres Strait, is the gateway to a diverse culture and vast region. The central islands are picture perfect coral cays; while in the east majestic mountains rise from the ocean. In the far north you'll find a cluster of islands which continue the tradition of trade with PNG coastal villages. 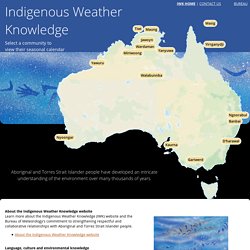 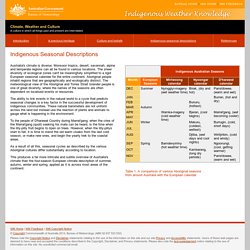 Monsoon tropics, desert, savannah, alpine and temperate regions can all be found in various locations. The sheer diversity of ecological zones can't be meaningfully simplified to a rigid European seasonal calendar for the entire continent. Aboriginal people inhabit regions that are geographically and ecologically distinct. Brambuk - The National Park & Cultural Centre. Indigenous seasons across northern Australia. Twelve Canoes. My Home in Kakadu (Video) - Crackerjack Education. My Home in Kakadu is a contemporary cultural story from a traditional owner of the Kakadu region that takes you on a journey through the amazing landscapes of Kakadu National Park. 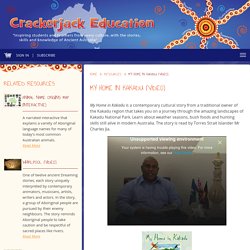 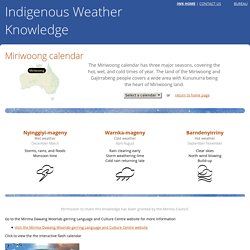 The land of the Miriwoong and Gajirrabeng people covers a wide area with Kununurra being the heart of Miriwoong land. Permission to share this knowledge has been granted by the Mirima Council. Go to the Mirima Dawang Woorlab-gerring Language and Culture Centre website for more information. Banbai calendar - Indigenous Weather Knowledge - Bureau of Meteorology. Banbai calendar Banbai The Wattleridge Indigenous Protected Area covers 650 hectares of woodlands and forests on granite soils, home to an amazing diversity of plants and animals. 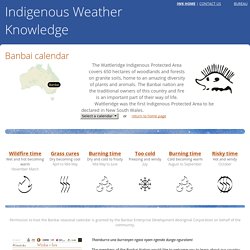 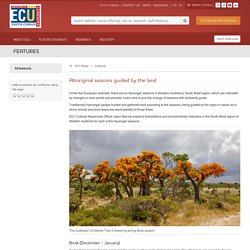 Learn how to pick the change of seasons with thishandy guide. Traditionally Nyoongar people hunted and gathered food according to the seasons, being guided by the signs in nature as to which animal and plant resources were plentiful at those times. ECU Cultural Awareness Officer Jason Barrow explains thetraditions and environmental indicators in the South West region of Western Australia for each of the Nyoongar seasons.

The Australian Christmas Tree is flowering during Birak season. Birak (December - January) During Birak season the rain eases and the warm weather really starts to take hold. Traditionally this was the fire season. There are many fledglings venturing out of nests in Birak, though some are still staying close to their parents such as magpies and parrots. Djeran (April – May) 5 Seasons (2004) clip 1 on ASO - Australia's audio and visual heritage online. Calendar.