Did You Know: Note Links, and How to Use Them. Posted by Kasey Fleisher Hickey on 21 Oct 2011 Note Links are a new-ish feature we introduced that’s been talked about here and there on the blog. 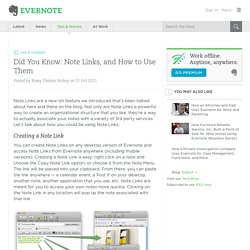 Mohiomap - A Visual Memory for Evernote. Useful apps and products integrated with Evernote. Did You Know: How to Create a Checklist in Evernote. If you’ve been following our user stories, you may have noticed that a lot of people love to make checklists in Evernote. 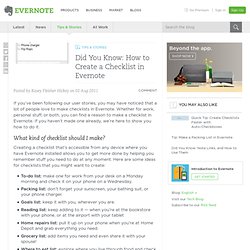 Whether for work, personal stuff, or both, you can find a reason to make a checklist in Evernote. If you haven’t made one already, we’re here to show you how to do it. Getting Things Done with Evernote—Projects Part 1: Note Templates for Windows. I’ve been promising this post for a while now, but before we get down to the nitty-gritty, we need to learn how to create note templates in Evernote for Windows (The process is different if you’re on a Mac. 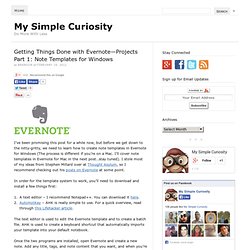 I’ll cover note templates in Evernote for Mac in the next post…stay tuned). I stole most of my ideas from Stephen Millard over at Thought Asylum, so I recommend checking out his posts on Evernote at some point. In order for the template system to work, you’ll need to download and install a few things first: Getting Things Done (GTD) with Mindmaps. It’s time for another video. 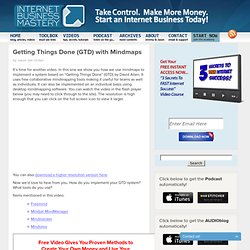 In this one we show you how we use mindmaps to implement a system based on “Getting Things Done” (GTD) by David Allen. It uses free collaborative mindmapping tools making it useful for teams as well as individuals. It can also be implemented on an individual basis using desktop mindmapping software. You can watch the video in the flash player below (you may need to click through to the site). 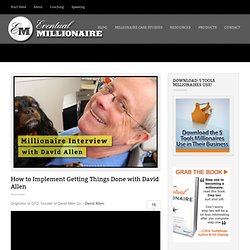 If you haven’t read his books yet, you must. GTD - Implementation Guide for the GTD Methodology (David Allen 2010) 10 Ways to Implement GTD Simply — Getting Things Done. GTD Cheatsheet – An Intro on the GTD system. The system created by David Allen in his popular book Getting Things Done focuses on freeing up your mind’s RAM (or resources). 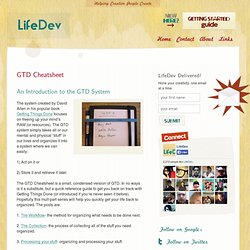 The GTD system simply takes all or our mental and physical “stuff” in our lives and organizes it into a system where we can easily: 1) Act on it or 2) Store it and retrieve it later. The GTD Cheatsheet is a small, condensed version of GTD. Beginner’s Guide to GTD. GTD in 15 minutes – A Pragmatic Guide to Getting Things Done. GTD—or “Getting things done”—is a framework for organizing and tracking your tasks and projects. 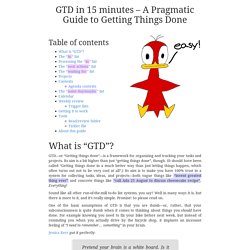 Its aim is a bit higher than just “getting things done”, though. (It should have been called “Getting things done in a much better way than just letting things happen, which often turns out not to be very cool at all”.) Its aim is to make you have 100% trust in a system for collecting tasks, ideas, and projects—both vague things like “invent greatest thing ever” and concrete things like “call Ada 25 August to discuss cheesecake recipe”.

Everything! Sound like all other run-of-the-mill to-do list systems, you say? One of the basic assumptions of GTD is that you are dumb—or, rather, that your subconsciousness is quite dumb when it comes to thinking about things you should have done. Productivity Prompts: Getting Things Done with Mind Maps - via @Mindjet's Conspire #ideasquad. For those of you starting to think about using mind maps for getting things done, David Allen’s GTD Connect community is a great place to start. 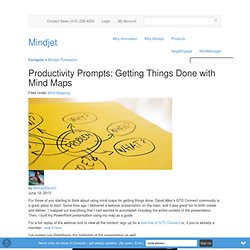 Some time ago I delivered a webinar presentation on the topic, and it was great fun to both create and deliver. I mapped out everything that I had wanted to accomplish including the entire content of the presentation. Then, I built my PowerPoint presentation using my map as a guide. For a full replay of the webinar and to view all the content, sign up for a free trial of GTD Connect or, if you’re already a member, view it here. The Ultimate Getting Things Done Index. Getting Things Done - marvelz. A Fresh Take on Contexts. As my Twitter followers may know, I have been experimenting with a complete new context setup in OmniFocus in the last two to three weeks. 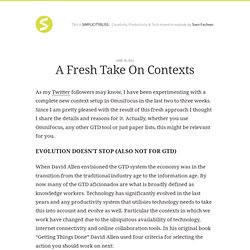 Since I am pretty pleased with the result of this fresh approach I thought I share the details and reasons for it. Actually, whether you use OmniFocus, any other GTD tool or just paper lists, this might be relevant for you. Evolution doesn’t stop (also not for GTD) When David Allen envisioned the GTD system the economy was in the transition from the traditional industry age to the information age. By now many of the GTD aficionados are what is broadly defined as knowledge workers. Context (availability of tools like phone, computer, internet connection, office)Time (time you have at hand, e.g. before the next meeting starts)Energy (the level of attention you can devote to the task)Priority (if you still need to chose between tasks which one is most important) Contexts became ubiquitous Today, where ever you are, most of your tools are always available.

10 Tips for Using Evernote Effectively. Evernote is a tool for keeping track of, well, everything. 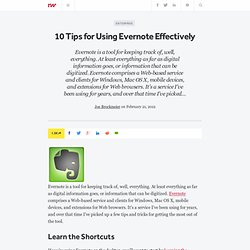 At least everything as far as digital information goes, or information that can be digitized. Evernote comprises a Web-based service and clients for Windows, Mac OS X, mobile devices, and extensions for Web browsers. It's a service I've been using for years, and over that time I've picked up a few tips and tricks for getting the most out of the tool.

Learn the Shortcuts If you're using Evernote on the desktop, you'll want to start by learning the keyboard shortcuts. Remember everything with Evernote, Skitch and our other great apps. Learn How to Use Evernote. Evernote Web. Evernote Tips: How To Link Notes Together in Evernote. Evernote Blog: product updates, tips and user stories. Evernote- A Teachers Perspective by Rebecca Spink on Prezi. Evernote. Evernote. The Secret Weapon Combines GTD and Evernote into One Synchronized Productivity System. Evernote « Categories. Use TextExpander, TaskClone and Evernote to automate your meetings!

What if you could take notes and automatically have tasks sync’ed to your task application without doing anything but entering a couple keystrokes? What if you could achieve this automation using a simple note taking application like Drafts? This is possible with background services called TaskClone and an application called TextExpander Touch. As I wrote in my prior post, utilizing TaskClone with Evernote is the fastest way to capture tasks while taking notes.

If you use one of the many task applications that can capture tasks via emails, TaskClone will sync all of your lines with checkboxes directly into your task application. I wrote a post about how to automate the creation of Evernote templates with FastEver XL. TextExpander Touch is the iOS version of its keyboard automation system. The date is automatically populated by TextExpander with the following text in the meeting agenda template; \%Y-%m-%d TITLE. The Bad: Evernote as a Task Manager, Update One « How-To. As I wrote here, I have switched from iOS Reminders to Evernote to manage my tasks. One week in and I am still using Evernote as my task manager! I can say that the transition has not been seamless, but overall the experience has been positive. Evernote and GTD on an iPad. Here’s an article by John Mayson on how he uses Evernote with GTD. Below, I’ve added comments on how I use it with specific reference to the iPad2, which is mostly where I play with Evernote these days.

This is going to be a long-assed blog post, so if you’re in hurry, here’s a summary: I use Evernote for all my notetakeing, referencing and for GTD (Getting Things Done)I’m not a power GTD user; still getting used to it.Evernote uses Notebooks and tags to identify/locate your notes. I use just 2 notebooks: GTD (all actionable items) and Reference (everything not actionable)John Mayson uses tags sparingly: only 1/3 of his notes have tags. A Closer Look at How I Organize My Notes In Evernote. Of all of the questions I get in my capacity as Evernote’s ambassador for paperless lifestyle, the one asked most frequently is: “How do you organize your notes?” I’ve written on this subject before, way back in May, when I provided some tips on organizing your digital filing cabinet. But if I have learned one thing about note organization in the months since, it’s that it is an evolving process. At least, that’s the way it has been in my case.

So this week, I thought I would dive into more detail on how and why I organize my notes the way I do, and in doing so, take a closer look at note organization in general. How to Get Your Stuff into Evernote. It is no secret that I am a big fan of Evernote. It is one of those amazing tools that can radically boost your productivity. I use it probably more than any other program other than Mac Mail. It has enabled me to realize my dream of a paperless office. But Evernote can also be initially intimidating. The program is so deep and feature-rich that new users hardly know where to start. If you are just getting started with Evernote, I suggest that you buy Brett Kelly’s remarkably practical e-book, Evernote Essentials, Second Edition.

Now, after several months of really exploring the program, I have discovered ten different tools for getting my content into Evernote: Type It. Record it. You don’t have to use all of these techniques, of course. Question: Which of these tools do you find yourself using the most? How to Organize Evernote for Maximum Efficiency. Going Paperless. Below is a condensed index of my weekly Going Paperless tips that I do in my capacity as Evernote’s Paperless Lifestyle Ambassador. These weekly tips are also available via RSS. Below the index are some supplementary posts I’ve done that may be of interest to folks. Evernote as a Task Manager, Update One « How-To.