Remember everything with Evernote, Skitch and our other great apps. 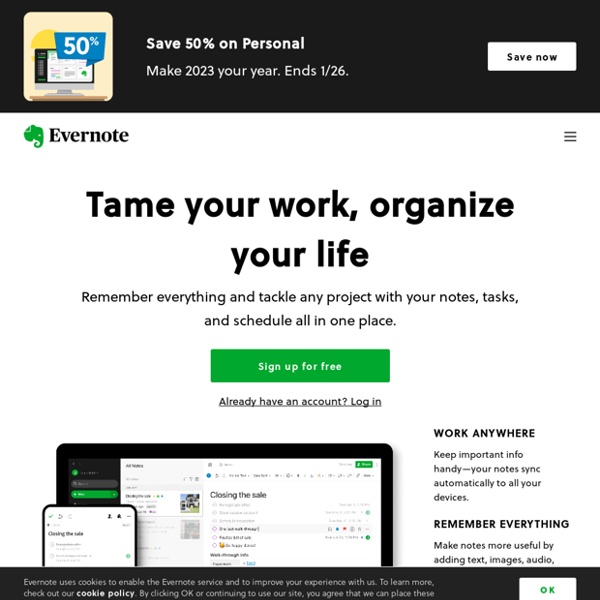 ELT burnout revisited A little more than two years ago, I talked about burnout, particularly the path towards it that I and probably you were on. My ELT:Other ratio stared glaringly in my face, mocking my attempts at having a life outside of language teaching. It’s then that I realised I was definitely on the road to burnout. Now with Shelly Sanchez Terrell’s cycle 4 of the 30 Goals for Educators, and an upcoming Google Hangout I’ll be doing with her about them, it seems like an opportune time to revisit my path and see if things have changed. Practical Tips for Web and Mobile Usability Tests Jerry Cao is a content strategist at UXPin — a wireframing and prototyping app with built-in usability testing — where he develops in-app and online content for the wireframing and prototyping platform. To learn how to conduct 20 different types of usability tests, check out The Guide to Usability Testing. While most usability testing methods described in The Guide to Usability Testing apply to Web and mobile, we want to describe some of the nuances specific to each medium. Actually, most usability testing methods can be run any product from cloud payment systems to next-generation gaming consoles. You might also like: Bevy Wants to Gather All Family Photos In One Place

Styling <hr> with CSS Introduction Even though it's sometimes recommended to replace the <hr> element with cascading stylesheets only using horizontal borders of other elements, I prefer <hr> as a section divider. This makes a web page more readable even in older browsers that receive only pure HTML with no style sheet. On the other hand, simple, unstyled <hr> does not look good in richly styled documents. That's why I tried to find a couple of cross-browser compatible ways to make it prettier.

OS X 10.9.5 Gatekeeper Codesign issues Gatekeeper 10.9.5 being a tight-arse? Yep… This issue won’t affect most people, but it has affected some. If you have applications you run that are codesigned (code signed) on a computer running a version of OS X earlier than 10.9.x you may find they no longer open. This article on TAUW explains the issue in detail. The standard work around is to go into the Gatekeeper settings and set it to allow opening of applications downloaded from anywhere. How to Create a Tumblr Theme (Code Structure) As we have previously seen, Tumblr allows its uses to create custom themes, giving the owner of a tumbleblog the ability to truly customise their tumbleblog to be their own. While Tumblr coding is fairly easy to pick up compared to other more complex blogging systems, I want to give you an insight into the code and structure we are going to be deploying next time around when we set about converting a PSD to Tumblr. Understanding the basics Before we get stuck into the Tumblr code, you need to first know what a Tumblr theme looks like. Gone are the gazillion template files of other CMS’s; Tumblr uses one and only one. A single page of HTML, with the CSSs and scripts in the head of the file is all you’ll need.

Scoop.it Buffer is the best way to share on Twitter, Facebook, Google+, LinkedIn and App.net from one place. It work from news apps like Flipboard, Zite, Taptu, TweetDeck, Evernote, Pocket, Instapaper, Pulse, Feedly, UberSocial, Plume, Seesmic, Google Currents and other Google Reader app. You also get Twitter analytics, Facebook analytics & LinkedIn stats. When you find something to share, simply add it to your Buffer queue. Buffer will schedule tweets to Twitter, Facebook posts or LinkedIn updates spaced out over the day. You will get the best results by sharing on Facebook and Twitter for Android. News Detail - e-Skills The webinar will present educational robotics and coding and will also showcase how to integrate it in the science and mathematics school curricula. A special emphasis will be placed on engaging students across cultures, linguistic and social barriers, age, learning styles and gender. Educational robotics is a methodology that involves the use of robotics to generate competences inside the regular curricula. It aims to involve students of all ages - from kindergarten to upper secondary school - in the study of STEM subjects with a new approach. It can easily find a place in traditional maths and science curricula, increasing learning motivation, communication, and the development of mathematical, scientific and digital skills.

Install Bookmarklets / Extensions of Your Favorite Tools Posted by Shelly Terrell on Sunday, December 8th 2013 Included in the Digital Tips Advent Calendar and part of the Effective Technology Integration category The tools I choose to use habitually or recommend to teachers, usually meet most of these requirements, they provide: a free web versiona free mobile app (a plus if it works on multiple platforms)a bookmarklet or extension for your web browsera way to embed your work on your blog or platform Enable “Save As” in OS X Mountain Lion & OS X Mavericks Mac users with OS X Mavericks, Yosemite, and Mountain Lion finally have the option to bring back the much-loved “Save As” feature that was removed from Lion. It’s slightly hidden though, and there’s a few quirks with it, but we’ll show you how to access “Save As” and even better, how to have it always be visible by enabling a reasonable keyboard shortcut to use the feature again with a simple keystroke. This will work on all Macs with OS X Yosemite, OS X Mavericks, and OS X Mountain Lion, leaving Lion to be the odd version out, as versions of Mac OS X prior to that retained Save As from the earliest days of the Mac operating system. On with using Save As in modern OS X! How to Use “Save As” in OS X Mavericks, Yosemite, & Mountain Lion

The 50+ Best Ways to Curate and Share Your Favorite Social Media and News Content There’s so much information online just begging to be curated: news, social media, images, video, websites… the list goes on. Reading great content from my favorite blogs and websites is one of my favorite down-time activities. It’s also an important part of my job as an IT Director because I need to stay on top of the latest trends, announcements and tech news. Just a few years ago, the tools I used to use for reading and consuming content were Google Reader, StumbleUpon, Digg, Delicious… you know all the big names. More recently I’ve discovered some great new tools to read and share my favorite content which I’ve included here in this list.