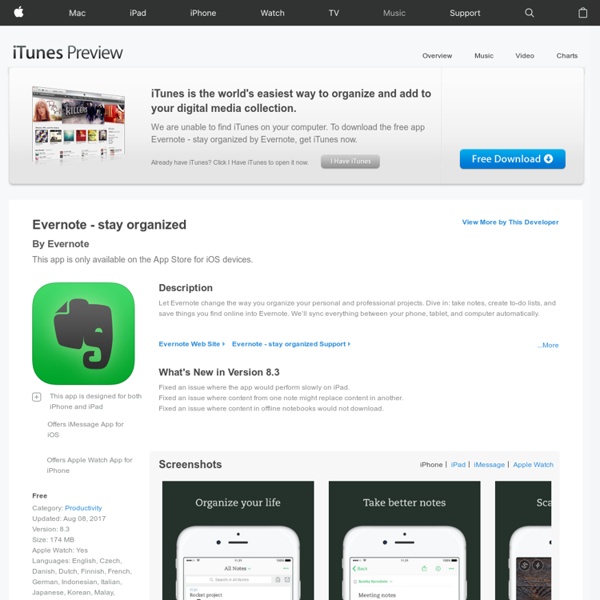 CAST Science Writer Welcome to CAST Science Writer, the tool that supports students in writing lab and class reports. This tool is geared toward middle school and high school students. Check out the supports and help available in Science Writer described below. Or click the "Take a Tour" button above to see how Science Writer works. A Report Structure Scoop.it Buffer is the best way to share on Twitter, Facebook, Google+, LinkedIn and App.net from one place. It work from news apps like Flipboard, Zite, Taptu, TweetDeck, Evernote, Pocket, Instapaper, Pulse, Feedly, UberSocial, Plume, Seesmic, Google Currents and other Google Reader app. You also get Twitter analytics, Facebook analytics & LinkedIn stats. When you find something to share, simply add it to your Buffer queue. Buffer will schedule tweets to Twitter, Facebook posts or LinkedIn updates spaced out over the day.

VideoScribe Skip to main content VideoScribe Anywhere The magic is mobile Watch the demoPlay video Tiny Wind & Solar Powered Home Lets You Live Off The Grid Anywhere In The World Ecocapsules, designed by Bratislava-based Nice Architects, promise to let anyone live off the grid for up to a year. Each unit is equipped with solar panels, a retractable wind-turbine, and a design that captures rain water. Inside, you’ll find a kitchenette with running water, a flushing toilet, and hot shower. The Ecocapsule “is suitable for a wide range of applications,” write the designers, such as an “independent research station or a tourist lodge to an emergency housing or a humanitarian-action unit.”

How Whole Turmeric Heals The Damaged Brain Long considered impossible to accomplish, new research reveals how a simple spice might contribute to the regeneration of the damaged brain. Turmeric is hands down one of the, if not the, most versatile healing spice in the world with over 600 experimentally confirmed health benefits, and an ancient history filled with deep reverence for its seemingly compassionate power to alleviate human suffering. But, most of the focus over the past decade has been centered on only one of its many hundreds of phytocompounds: namely, the primary polyphenol in turmeric known as curcumin which gives the spice its richly golden hue. This curcumin-centric focus has lead to the development of some very good products, such as phospholipid bound curcumin concentrate (e.g. Meriva, BCM-95) which greatly helps to increase the absorption and bio-activity of curcumin.

The 50+ Best Ways to Curate and Share Your Favorite Social Media and News Content There’s so much information online just begging to be curated: news, social media, images, video, websites… the list goes on. Reading great content from my favorite blogs and websites is one of my favorite down-time activities. It’s also an important part of my job as an IT Director because I need to stay on top of the latest trends, announcements and tech news. Just a few years ago, the tools I used to use for reading and consuming content were Google Reader, StumbleUpon, Digg, Delicious… you know all the big names.

Sugar Harms Your Brain Health, Drives Alzheimer’s Epidemic By Dr. Joseph Mercola Guest Writer for Wake Up World Alzheimer’s disease, a severe form of dementia, affects an estimated 5.2 million Americans, according to 2013 statistics.[1] One in nine seniors over the age of 65 has Alzheimer’s, and the disease is now thought to be the third leading cause of death in the US, right behind heart disease and cancer.

The app here is very easy to use and has various ways to help you. You can take notes and edit them whenever you want. The bad thing about this app is that it may not save the notes you have taken. Also, a lot of notes can make it seem cluttered. This can help in the future because all of the notes can let you not forget what events you need to do. by ah008352 Jun 3