Serie D. Evernote is as hot as any startup in Silicon Valley, even if they don’t get quite as much press. 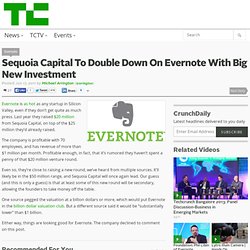 Last year they raised $20 million from Sequoia Capital, on top of the $25 million they’d already raised. The company is profitable with 70 employees, and has revenue of more than $1 million per month. Profitable enough, in fact, that it’s rumored they haven’t spent a penny of that $20 million venture round. Even so, they’re close to raising a new round, we’ve heard from multiple sources.

It’ll likely be in the $50 million range, and Sequoia Capital will once again lead. One source pegged the valuation at a billion dollars or more, which would put Evernote in the billion dollar valuation club. Either way, things are looking good for Evernote. Serie C. Memory enhancement service Evernote is loved by many, including, it appears, venture capitalists. 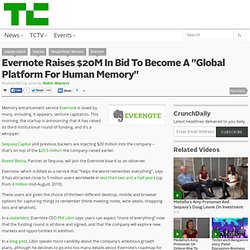 This morning, the startup is announcing that it has raised its third institutional round of funding, and it’s a whopper: Sequoia Capital and previous backers are injecting $20 million into the company – that’s on top of the $25.5 million the company raised earlier. Roelof Botha, Partner at Sequoia, will join the Evernote board as an observer. Evernote, which is billed as a service that “helps the world remember everything”, says it has attracted close to 5 million users worldwide in less than two and a half years (up from 4 million mid-August 2010). These users are given the choice of thirteen different desktop, mobile and browser options for capturing things to remember (think meeting notes, wine labels, shopping lists and whatnot). The full list of investors for Evernote’s $20 million Series C round: Sequoia Capital, Morgenthaler Ventures, Troika Dialog and DOCOMO Capital.

Serie B. Evernote, which lets you record almost any type of data and recall it when you need it, just raised $10 million in a second round of venture-backed financing. 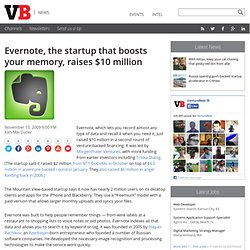 It was led by Morgenthaler Ventures, with more funding from earlier investors including Troika Dialog. (The startup said it raised $2 million from NTT DoCoMo in October on top of $4.5 million in a venture-backed round in January. They also raised $6 million in angel funding back in 2006.) The Mountain View-based startup says it now has nearly 2 million users on its desktop clients and apps for the iPhone and Blackberry. They use a “freemium” model with a paid version that allows larger monthly uploads and syncs your files. Evernote was built to help people remember things — from wine labels at a restaurant to shopping lists to voice notes or old photos.

Serie A. Evernote, the online productivity application that uses pictures, notes and other memory aids to ease information overload, has raised $4.5 million more for development and marketing of its product. 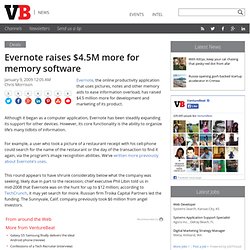 Although it began as a computer application, Evernote has been steadily expanding its support for other devices. However, its core functionality is the ability to organize life’s many tidbits of information. For example, a user who took a picture of a restaurant receipt with his cell-phone could search for the name of the restaurant or the day of the transaction to find it again, via the program’s image recognition abilities. We’ve written more previously about Evernote’s uses. This round appears to have shrunk considerably below what the company was seeking, likely due in part to the recession; chief executive Phil Libin told us in mid-2008 that Evernote was on the hunt for up to $12 million; according to TechCrunch, it may yet search for more.

Angel rounds. We are all dealing with information overload. 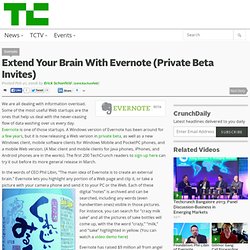 Some of the most useful Web startups are the ones that help us deal with the never-ceasing flow of data washing over us every day. Evernote is one of those startups. A Windows version of Evernote has been around for a few years, but it is now releasing a Web version in private beta, as well as a new Windows client, mobile software clients for Windows Mobile and PocketPC phones, and a mobile Web version. (A Mac client and mobile clients for Java phones, iPhones, and Android phones are in the works). The first 200 TechCrunch readers to sign up here can try it out before its more general release in March. In the words of CEO Phil Libin, “The main idea of Evernote is to create an external brain.” Each of these digital “notes” is archived and can be searched, including any words (even handwritten ones) visible in those pictures.

The handwriting-recognition capabilities are pretty amazing. Evernote is not just about your phone.