An Introduction to the Bystander Effect

The bystander effect refers to the social phenomenon where the greater number of people in the public area would result in the lower probability of them helping a person in distress. 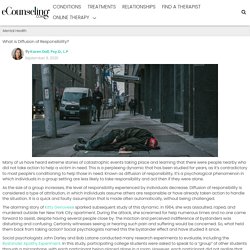 Three friends on a high-speed train from Paris to Amsterdam helped stop a gunman wielding an AK-47. This past spring, an Army captain in North Carolina pulled a couple to safety after a fiery car crash. Were these men instinctively courageous, or had they learned to be? The Army captain (aptly wearing a Captain America T-shirt) credited his military training for knowing what to do and remaining calm. These heroes are dramatic examples. And this conundrum is not limited to thwarting terrorism or physically saving someone. But we often look the other way, like the priest and Levite in the Good Samaritan parable. How to Overcome the Bystander Effect. Psychologists have long been interested in exactly why and when we help other people.

Imagine that you are walking into a large department store. Being Observant Being Skilled and Knowledgeable Guilt Feeling Good. Overcoming the Bystander Effect. Overcoming the bystander effect in chemical ethics. For PNNL chemist and Air Force veteran Kabrena Rodda, living by an honor code is second nature. 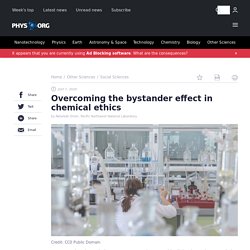 Her time at the Air Force Academy as both a cadet and later an instructor, instilled in her the value—and possibility—of a community that joins to uphold a standard of ideals, honesty, and responsibility. This background made Rodda well positioned to join with the American Chemical Society and the Organization for the Prohibition of Chemical Weapons to establish an honor code for the international community of chemists using The Hague Ethical Guidelines to guide discussions during the drafting. The resulting Global Chemists' Code of Ethics (GCCE) combined grassroots contributions from 18 countries in Europe, Asia, America, and the Middle East to define ethical standards working chemists are already expected to employ.

"When we came to consensus on the GCCE, there was enormous enthusiasm about sharing it," said Rodda. Practice makes progress. Helping Kids Overcome the Bystander Effect. Newscasters love to share stories of kids as young as three years old calling 911 to save a parent’s life.

These stories bear out what research has shown us: Very young children have a propensity to be kind and helpful. Starting as early as 18 months, studies show, toddlers spontaneously help an adult who is unable to pick up something he dropped or finds himself in a similarly tricky situation. Being kind at a cost to themselves makes two year olds happy, and three year olds who cooperate on a task share rewards even when they don’t have to. Overcoming the Bystander Effect: How People Can Help Each Other Online and IRL. Nir’s Note: This guest post is by Max Ogles, who writes at MaxOgles.com. 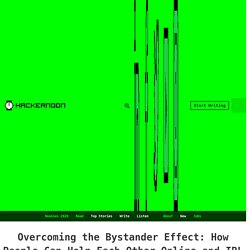 On March 27, 1964, Kitty Genovese was brutally attacked and killed in the open streets of New York City. What makes Genovese’s story so tragic is that police later discovered numerous people were aware of Genovese’s distress but never came to her aid. 5 Effective Tips to Overcome the Bystander Effect. Do you know about the bystander effect?

It's a social dynamic that affects almost everyone when an observed conflict is either ignored or worse, reinforced by the failure to act by those observing. An example of this would be a number of people in a park observing a man trying to take a woman's purse, yet doing nothing to report the crime or to deter the criminal by drawing attention to their actions. The sad fact is that most of us are vulnerable to this condition of non-action; but fortunately, there are things you can do to negate or minimize the impact. Here are a few tips for overcoming the bystander effect. 1. How This GPS App Uses Incentives To Overcome The Bystander Effect. Anyone hoping to bypass terrible traffic has likely turned to crowd-sourced data to find a way. 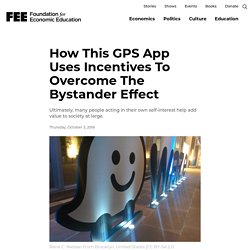 Mobile apps like Waze allow drivers and passengers to update other motorists with real-time roadway conditions. So, why do drivers take on an obligation to update an app after passing an inconvenience? The answer is incentive. One might expect drivers to think only about themselves on the road. If you hit terrible traffic, why is it your responsibility to notify the people miles behind you?