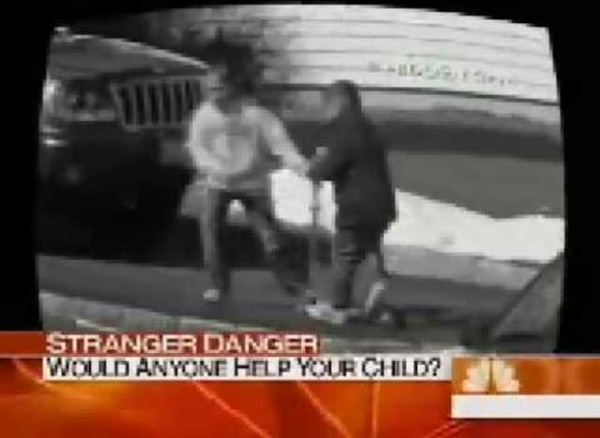 Why we still look away: Kitty Genovese, James Bulger and the bystander effect More than half a century later, the death of Kitty Genovese continues to remind us of the disconnect between what we believe about ourselves and how we really act under pressure. The murder of the 28-year-old outside her apartment in the Queens neighborhood of Kew Gardens in the early morning of 13 March 1964 rippled through New York City and around the world. How could a young, independent woman who lived on her own terms be so easily struck down? How could so many neighbors look on and turn away as she was stabbed repeatedly on the street and in her apartment building?

10 Notorious Cases of the Bystander Effect The bystander effect is the somewhat controversial name given to a social psychological phenomenon in cases where individuals do not offer help in an emergency situation when other people are present. The probability of help has in the past been thought to be inversely proportional to the number of bystanders. In other words, the greater the number of bystanders, the less likely it is that any one of them will help. This list describes the prototype of the effect and cites nine particularly heinous examples. New Yorkers grapple with stabbing death New Yorkers are grappling with the inaction of more than two dozen pedestrians who didn't help a Good Samaritan bleeding to death on a sidewalk after he tried to save a woman from a knife-wielding man in Queens, N.Y. Hugo Alfredo Tale-Yax, 31, was stabbed at about 7:20 a.m. on April 18 as he tried to help a woman being threatened by a knife-wielding man. Surveillance video from an apartment building captured Tale-Yax chasing the attacker before collapsing on the sidewalk.

the Richmond High School Incident Oct. 30, 2009 — -- Members of the Richmond, Calif., community were stunned by the alleged rape and assault of a high school student after a school dance last Saturday. But a nationwide news audience was even more astonished by allegations that about 20 people in the immediate area observed about 10 men and boys gang rape and beat the 15-year-old girl for two-and-a-half hours on the Richmond High School campus and did not contact authorities. Psychology experts say the incident, if it occurred as described, may have been the result of escalating wildness facilitated by an isolated, heavily male environment. "If one of the boys or men grabbed her and pulled her toward him ... and somebody else did something else so it became more and more sexual in nature ... we now have a [group of boys] who are pretty wild," said John Darley, a professor of psychology and public affairs at Princeton University. "Each act licensed what had gone before, and it also made more likely what came next."

New York Today: The City’s Bystander Effect Good morning on this clear Monday. The first time I dialed 911 in New York was on a subway platform at 42nd Street — last week. A woman was bleeding on her head and neck; she had fallen on the stairs between the platform and turnstiles. Some passengers hurried past her. Others stopped to look and moved on. Several took out their phones — not to call for help, but instead to record the scene. How to Overcome the Bystander Effect Psychologists have long been interested in exactly why and when we help other people. There has also been a tremendous amount of interest in the reasons why we sometimes don't help others. The bystander effect is a social phenomenon that occurs when people fail to help those in need due to the presence of other people. In many cases, people feel that since there are other people around, surely someone else will leap into action.1 While the bystander effect can have a negative impact on prosocial behavior, altruism and heroism, researchers have identified a number of different factors that can help people overcome this tendency and increase the likelihood that they will engage in helping behaviors.2 Some of these include: Witnessing Helping Behavior

Man charged with assault following alleged attack against Muslim woman on SkyTrain Transit police have arrested a 46-year-old man in connection with an alleged attack on an 18-year-old Muslim woman that, she says, was preceded by a racist rant. Charged with one count of threatening to cause death or bodily harm and one count of assault is Pierre Belzan of no fixed address. Police say they have also recommended a charge of sexual assault. The arrest and charges follow a complaint made by Noor Fadel. Fadel was heading home to Richmond after work on Monday night and got on the SkyTrain at Waterfront station around 10 p.m. PT.

Edison Electrocutes an Elephant Topsy the elephant was electrocuted at Luna Park Zoo on Coney Island in 1903. Captured on film by Thomas Edison, the event was one of a string of animal electrocutions Edison staged to discredit a new form of electricity: alternating current. __1903:__Thomas Edison stages his highly publicized electrocution of an elephant in order to demonstrate the dangers of alternating current, which, if it posed any immediate danger at all, was to Edison's own direct current. Edison had established direct current at the standard for electricity distribution and was living large off the patent royalties, royalties he was in no mood to lose when George Westinghouse and Nicola Tesla showed up with alternating current. Edison's aggressive campaign to discredit the new current took the macabre form of a series of animal electrocutions using AC (a killing process he referred to snidely as getting "Westinghoused"). Stray dogs and cats were the most easily obtained, but he also zapped a few cattle and horses.

The Bystander Effect is about more than the diffusion of responsibility Inspired by the shocking murder of a woman in New York in 1964, reportedly in front of numerous witnesses who did nothing to help (although this was exaggerated), the Bystander Effect is a well-researched phenomenon that describes the diminishing likelihood that any one person will help as the number of other people available to help increases. The most popular and widely researched explanation is that people experience a diffusion of responsibility when in the company of other bystanders. We don’t help the person who is being assaulted in a busy street because we assume that someone else will.

Bystander Effect - Definition, Examples and Experiment Bystander Effect Definition The bystander effect, also called bystander apathy, is a term in psychology that refers to the tendency of people to take no action in an emergency situation when there are others present. This phenomenon is highly studied in the field of sociology. Bystander Effect Explained Psychologically, there are many causes of the bystander effect. Police violence and the ‘bystander effect’ explained Since George Floyd died after police officer Derek Chauvin knelt on his neck for almost nine minutes on May 25, demonstrators across the country have gathered to protest police actions against African Americans. While most of the protests were calm, in several cities police officers have used force against demonstrators and journalists under the justification of crowd control. The sight of officers in riot gear beating marchers, firing rubber bullets and chemical- or pepper-based irritants, and shoving activists has reignited questions about accepted practices in the nation’s law enforcement community.

How Kitty Genovese's Brutal Murder Created the "Bystander Effect" When 28-year-old Catherine Susan Genovese was killed outside her apartment in Kew Gardens, Queens, 38 people reportedly witnessed the attack but didn’t get involved. Known to her friends as Kitty, she had only lived at 82-70 Austin Street for a year with her girlfriend, Mary Ann Zielonko, before returning on the night of March 13 from her job managing a bar. Two weeks later, the assault and murder of this charming and bright-eyed woman became headline news. In his book, Kitty Genovese: The Murder, the Bystanders, the Crime That Changed America, journalist Kevin Cook reports that the 38 figure, which would later prove to be incredibly influential, is inaccurate.

An experiment was conducted by the Security to observe the public reaction, what will they do when they see a little girl being abducted. Purpose of this experiment is to bring awareness to the public that they feel something is wrong, they should react as this will eventually decrease the crime rates in the country. by khairiyahhussin Sep 20