Being part of a large crowd makes it so no single person has to take responsibility for an action (or inaction). In a series of classic studies, researchers Bibb Latané and John Darley found that the amount of time it takes the participant to take action and seek help varies depending on how many other observers are in the room. The Kitty Genovese Case. The bystander effect is complicated. The Big Read: No child’s play when it comes to stamping out bullying in schools. SINGAPORE: They tagged her picture to a crying baby, as well as cropped her face out of the group photo which they posted on Instagram, while calling her "dumb", "loser" and "trash". 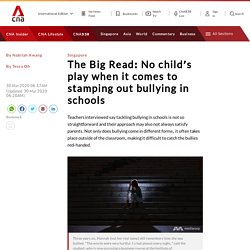 The 14-year-old was also added to a WhatsApp group with her bullies where they taunted her for being a slow learner — always having to stay back in school for remedial classes and not being able to read a comprehension passage fluently in class. Three years on, Hannah (not her real name), who is dyslexic, still remembers the ordeal. “The words were very hurtful.

I cried almost every night,” said the student currently pursuing a business course at the Institute of Technical Education (ITE). Then there is May (not her real name), 13. Also diagnosed with dyslexia when she was eight, May was bullied throughout primary school for not speaking well and being slower than the rest of her peers. Employees May Not Speak Up Because of Bystander Effect. Employee voice is a term used to describe a method of communicating information across hierarchies in the workplace, oftentimes from frontline workers to management. 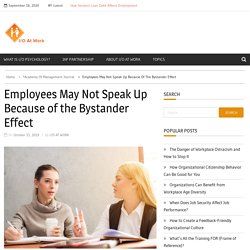 Research has demonstrated that voice has a variety of benefits to organizations, including increasing creativity, making processes more efficient, detecting new opportunities, and identifying errors. Frontline employees are often more aware of these elements than managers, as leaders may be disconnected from some day-to-day processes. However, these thoughts and concerns are sometimes not shared with management. Our phones make us feel like social-media activists, but they’re actually turning us into bystanders. On April 9, 2017, a video of a man being dragged off a United Airlines flight was posted on the internet and went viral.

But I don’t need to tell you that. Each of your most outspoken Facebook friends probably posted about the event, highlighting the aspects of it that best reinforced their worldview. The incident was covered all over American media and even sparked outrage in China. Mike Pence and the Bystander Effect in Action. A few weeks ago a friend emailed me to share a story about her daughter, Claire, a recent college graduate living and working in Boston. 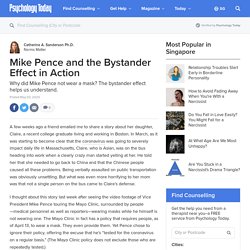 In March, as it was starting to become clear that the coronavirus was going to severely impact daily life in Massachusetts, Claire, who is Asian, was on the bus heading into work when a clearly crazy man started yelling at her. He told her that she needed to go back to China and that the Chinese people caused all these problems. Being verbally assaulted on public transportation was obviously unsettling. The bystander intervention model. When you be a passive and when you will be an active bystander? Confidence in Skills. Modelling, Explicit Teaching. Newscasters love to share stories of kids as young as three years old calling 911 to save a parent’s life.

These stories bear out what research has shown us: Very young children have a propensity to be kind and helpful. Yes, Individual Responsibility Is Essential. In November, Sierra published an article by one of the magazine’s editors, Katie O’Reilly, about her personal struggle in deciding whether to have children in the age of climate chaos and mass extinction. 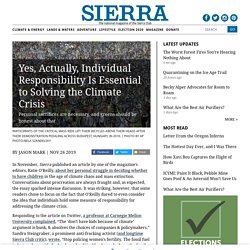 Conversations about procreation are always fraught and, as expected, the essay sparked intense discussion. It was striking, however, that some readers chose to focus on the fact that O’Reilly dared to even consider the idea that individuals hold some measure of responsibility for addressing the climate crisis. Responding to the article on Twitter, a professor at Carnegie Mellon University complained, “The ‘don’t have kids because of climate’ argument is bunk, & absolves the choices of companies & policymakers.” Sandra Steingraber, a prominent anti-fracking activist (and longtime Sierra Club critic), wrote, “Stop policing women’s fertility. The fossil fuel industry along with the banks and political leaders who keep the fossil fuel party going is the cause of the problem.” Join Us. They bystander effect can help to increase helping behaviours. Is There a Legal Obligation to Assist Others in Emergency Situations?

Often, morals or ethics can conflict with legal duties and responsibilities. 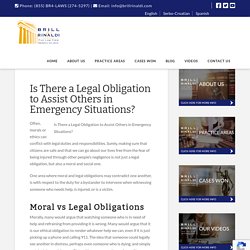 Surely, making sure that citizens are safe and that we can go about our lives free from the fear of being injured through other people’s negligence is not just a legal obligation, but also a moral and social one. One area where moral and legal obligations may contradict one another, is with respect to the duty for a bystander to intervene when witnessing someone who needs help, is injured, or is a victim. Moral vs Legal Obligations Morally, many would argue that watching someone who is in need of help and refraining from providing it is wrong. Many would argue that it is our ethical obligation to render whatever help we can, even if it is just picking up a phone and calling 911. The author argues that the Holocaust may not have happened or would have been mitigated had those people who stood by and did nothing took some action to stop it from happening, or at least, tried to protect Holocaust victims.