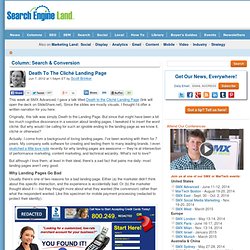 Since the slides are mostly visuals, I thought I’d offer a written narration for you here. Originally, this talk was simply Death to the Landing Page. But since that might have been a bit too much cognitive dissonance in a session about landing pages, I tweaked it to insert the word cliché. But why would I be calling for such an ignoble ending to the landing page as we know it, cliché or otherwise?

Actually, I come from a background of loving landing pages. But although I love them, at least in their ideal, there’s a sad fact that pains me daily: most landing pages aren’t very good. Why Landing Pages Go Bad Usually there’s one of two reasons for a bad landing page. The analogy of these types of landing pages is that they’re like pick-up lines. Think about that for a moment. The good news, however, is that it doesn’t have to be that way.

But wait, there’s more. Hit By Penguin? Take the Red Pen Test. The “Above the Fold” Myth Debunked — Eugen Oprea. Google Updates Above the Fold Page Layout Algorithm. Google’s Matt Cutts has announced the first official update to January’s Page Layout algorithm, designed to reward sites with content, rather than ads, above the fold. 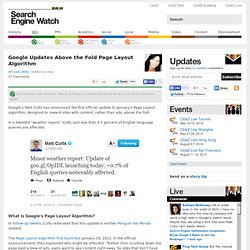 In a tweeted “weather report,” Cutts said less than 0.7 percent of English language queries are affected. What is Google's Page Layout Algorithm? In follow-up tweets, Cutts reiterated that this update is neither Penguin nor Panda-related. The Page Layout algorithm first launched January 19, 2012. In the official announcement, they explained who might be affected: “Rather than scrolling down the page past a slew of ads, users want to see content right away. They continued, “If you click on a website and the part of the website you see first either doesn’t have a lot of visible content above-the-fold or dedicates a large fraction of the site’s initial screen real estate to ads, that’s not a very good user experience.

The initial launch affected 1 percent of search queries globally. Above the Fold Page Layout Algorithm Recovery. How to Optimize Landing Pages for Conversion. Landing pages literally serve as the location your prospect “lands” on your website. 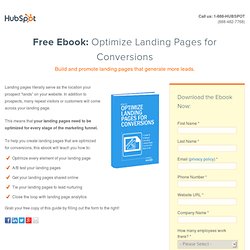 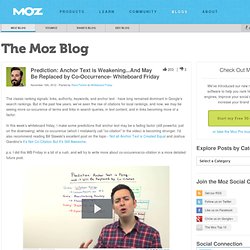 But in the past few years, we've seen the rise of citations for local rankings, and now, we may be seeing more co-occurence of terms and links in search queries, in text content, and in links becoming more of a factor. p.s. I did this WB Friday in a bit of a rush, and will try to write more about co-occurence/co-citation in a more detailed future post. "Howdy, SEOmoz fans, and welcome to a second beardless edition of Whiteboard Friday. I apologize. Sales Funnel Secret: Pluralizing The Verb. It’s truly amazing how one single letter in your headline or copy can completely alter the success of your sales funnel. 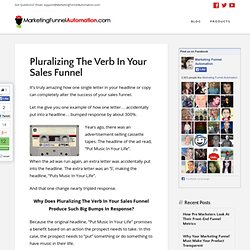 Let me give you one example of how one letter… accidentally put into a headline… bumped response by about 300%. Years ago, there was an advertisement selling cassette tapes. The headline of the ad read, “Put Music In Your Life”. When the ad was run again, an extra letter was accidentally put into the headline. The extra letter was an ‘S’, making the headline, “Puts Music In Your Life”. And that one change nearly tripled response. Why Does Pluralizing The Verb In Your Sales Funnel Produce Such Big Bumps In Response?

Because the original headline, “Put Music In Your Life” promises a benefit based on an action the prospect needs to take.