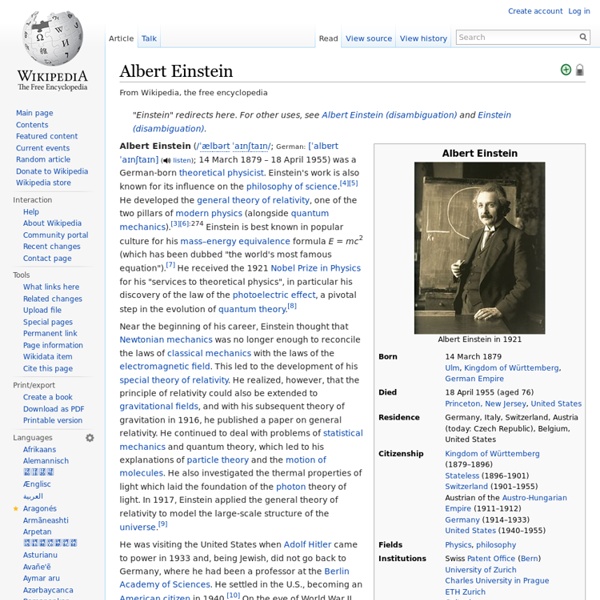 Albert Einstein (/ˈælbərt ˈaɪnʃtaɪn/; German: [ˈalbɐrt ˈaɪnʃtaɪn]; 14 March 1879 – 18 April 1955) was a German-born theoretical physicist. Einstein's work is also known for its influence on the philosophy of science.[4][5] He developed the general theory of relativity, one of the two pillars of modern physics (alongside quantum mechanics).[3][6]:274 Einstein is best known in popular culture for his mass–energy equivalence formula E = mc2 (which has been dubbed "the world's most famous equation").[7] He received the 1921 Nobel Prize in Physics for his "services to theoretical physics", in particular his discovery of the law of the photoelectric effect, a pivotal step in the evolution of quantum theory.[8] Near the beginning of his career, Einstein thought that Newtonian mechanics was no longer enough to reconcile the laws of classical mechanics with the laws of the electromagnetic field. This led to the development of his special theory of relativity. Life Early life and education Death

Charles Darwin Charles Robert Darwin, FRS (/ˈdɑrwɪn/;[1] 12 February 1809 – 19 April 1882) was an English naturalist and geologist,[2] best known for his contributions to evolutionary theory.[I] He established that all species of life have descended over time from common ancestors,[3] and in a joint publication with Alfred Russel Wallace introduced his scientific theory that this branching pattern of evolution resulted from a process that he called natural selection, in which the struggle for existence has a similar effect to the artificial selection involved in selective breeding.[4] Darwin published his theory of evolution with compelling evidence in his 1859 book On the Origin of Species, overcoming scientific rejection of earlier concepts of transmutation of species.[5][6] By the 1870s the scientific community and much of the general public had accepted evolution as a fact. Biography Early life and education Painting of seven-year-old Charles Darwin in 1816. Voyage of the Beagle Death and funeral Works

How Anyone Can Become a Good Public Speaker Leonardo da Vinci Leonardo is revered for his technological ingenuity. He conceptualised flying machines, an armoured vehicle, concentrated solar power, an adding machine,[7] and the double hull, also outlining a rudimentary theory of plate tectonics. Relatively few of his designs were constructed or were even feasible during his lifetime,[nb 2] but some of his smaller inventions, such as an automated bobbin winder and a machine for testing the tensile strength of wire, entered the world of manufacturing unheralded.[nb 3] He made substantial discoveries in anatomy, civil engineering, optics, and hydrodynamics, but he did not publish his findings and they had no direct influence on later science.[8] Life Childhood, 1452–1466 Leonardo's earliest known drawing, the Arno Valley (1473), Uffizi Verrocchio's workshop, 1466–1476 Professional life, 1476–1513 In 1482 Leonardo, who according to Vasari was a most talented musician,[25] created a silver lyre in the shape of a horse's head. Old age, 1513–1519 Personal life

15 Stunning Examples Of Owl Camouflage Owls are fascinating and beautiful birds we rarely get to see up close and personal. Owls come out at night in order to avoid competition over prey with other large birds. This alone says a great deal about the owls’ personality. Owls like to creep in the shadows, remaining hidden and discrete at all times in order to stay safe as well as catch prey. It certainly helps that they have incredibly silent wings, and the ability to sit very still for long periods of time. It’s not easy to find all of the owls in these pictures. Owls have vivid coat colors that help them remain hidden depending on the environment they reside in. Owls like to use leaves as a way to keep cover, places with thick leave coverage often host a few hide away owls, watching and waiting for nightfall to arrive. Owls are never one solid color, which makes them harder to see at night because not one color stands out. Some owls don’t reside in trees but instead burrow under ground. Trending Today

James Clerk Maxwell James Clerk Maxwell FRS FRSE (13 June 1831 – 5 November 1879) was a Scottish[2][3] mathematical physicist.[4] His most notable achievement was to formulate the classical theory of electromagnetic radiation, bringing together for the first time electricity, magnetism, and light as manifestations of the same phenomenon. Maxwell's equations for electromagnetism have been called the "second great unification in physics"[5] after the first one realised by Isaac Newton. With the publication of A Dynamical Theory of the Electromagnetic Field in 1865, Maxwell demonstrated that electric and magnetic fields travel through space as waves moving at the speed of light. Maxwell proposed that light is an undulation in the same medium that is the cause of electric and magnetic phenomena.[6] The unification of light and electrical phenomena led to the prediction of the existence of radio waves. Life[edit] Early life, 1831–39[edit] Education, 1839–47[edit] Edinburgh Academy, where Maxwell was schooled ...

Isaac Newton Sir Isaac Newton PRS MP (/ˈnjuːtən/;[8] 25 December 1642 – 20 March 1726/7[1]) was an English physicist and mathematician (described in his own day as a "natural philosopher") who is widely recognised as one of the most influential scientists of all time and as a key figure in the scientific revolution. His book Philosophiæ Naturalis Principia Mathematica ("Mathematical Principles of Natural Philosophy"), first published in 1687, laid the foundations for classical mechanics. Newton made seminal contributions to optics, and he shares credit with Gottfried Leibniz for the development of calculus. Newton built the first practical reflecting telescope and developed a theory of colour based on the observation that a prism decomposes white light into the many colours of the visible spectrum. He formulated an empirical law of cooling, studied the speed of sound, and introduced the notion of a Newtonian fluid. Life Early life Isaac Newton (Bolton, Sarah K. Middle years Mathematics Optics

10 Awesome Products That Are Reinventions Of Existing Items You have probably used a table every single day in your life... but we bet you never thought about how to reimagine a table to make it something completely new. Why would you? Thankfully, 10 brilliant people thought of ways to reinvent everyday items so you wouldn't have to. Tables, candles, and more just got a facelift - and now they are way more useful. 1.) The Fletcher Capstan Table: This table doubles in size in mere seconds. Business Insider 2.) 3.) 4.) 5.) 6.) 7.) 8.) 9.) 10.) (H/T Business Insider) Some of these products are just prototypes, but the world will be a better place when anyone can buy them.

Alhazen In medieval Europe, he was honored as Ptolemaeus Secundus ("Ptolemy the Second")[10] or simply called "The Physicist".[11] He is also sometimes called al-Basri (Arabic: البصري) after Basra, his birthplace.[12] He spent most of his life close to the court of the Caliphate in Cairo and earned his living authoring various treatises and tutoring members of the nobilities.[13] Overview[edit] Biography[edit] Born c. 965 in Basra, which was then part of the Buyid emirate,[1] to an Arab family.[14][15] Legacy[edit] Front page of the Opticae Thesaurus, which included the first printed Latin translation of Alhazen's Book of Optics. Alhazen made significant contributions to optics, number theory, geometry, astronomy and natural philosophy. One of the major scientific anniversaries that will be celebrated during the 2015 International Year of Light is: the works on optics by Ibn Al-Haytham (1015). Book of Optics[edit] Main article: Book of Optics Theory of vision[edit] Alhazen on Iraqi 10 dinars G. A.

Fashion Logo Calligraphy - Seb Lester When you're looking for the next thing to occupy that moment after you check your last work email and before you pass out, scroll through London-based calligrapher Seb Lester’s Instagram videos (@seblester). More specifically, his insanely satisfying, endlessly addictive clips of free-handing fashion logos. You’re pretty sure you don’t have ASMR. What is it about his videos that are so soothing? See below for four of his fashion logos, and then make sure you’re following his account where he also tackles traditional calligraphy, metallic embossing, and a whole catalog of TV shows and movie titles (you haven’t really lived until you’ve seen Harry Potter written out).

Galileo Galilei Galileo Galilei (Italian pronunciation: [ɡaliˈlɛːo ɡaliˈlɛi]; 15 February 1564[3] – 8 January 1642), often known mononymously as Galileo, was an Italian physicist, mathematician, engineer, astronomer, and philosopher who played a major role in the scientific revolution during the Renaissance. His achievements include improvements to the telescope and consequent astronomical observations and support for Copernicanism. Galileo has been called the "father of modern observational astronomy",[4] the "father of modern physics",[5][6] the "father of science",[6][7] and "the father of modern science".[8] Early life Galileo was born in Pisa (then part of the Duchy of Florence), Italy, in 1564,[15] the first of six children of Vincenzo Galilei, a famous lutenist, composer, and music theorist, and Giulia Ammannati. Although a genuinely pious Roman Catholic,[17] Galileo fathered three children out of wedlock with Marina Gamba. Career as a scientist Galileo, Kepler and theories of tides

15 Ways to Empower Others in 15 Minutes “A leader is best when people barely know he exists, when his work is done, his aim fulfilled, they will say: We did it ourselves.” – Lao Tzu Empowering others happens as you develop into a better leader and friend. After empowering YOU, the key is using that courage and sensibility to lead and change lives. Building a community, a tribe, a plan for world domination—all of that big, heavy world-changing stuff begins with the ability to make other people do positive things they already want to do. Sounds crazy, right? Strong female leaders such as Michelle Obama and Aung San Suu Kyi are able to mobilize entire communities and countries, with just words and actions, and they do it with intellect and style. 1. The universe is made up of little interactions that stimulate the energy and growth within a community. [Related: 5 Ways to Get Noticed at Work] 2. Be conscious about your words and actions so that you can be a positive force, rather than fueling the fire. 3. 4. 5. 6. 7. 8. 9. 10.

Edward Witten Edward Witten (/ˈwɪtən/; born August 26, 1951) is an American theoretical physicist and professor of mathematical physics at the Institute for Advanced Study in Princeton, New Jersey. Witten is a researcher in string theory, quantum gravity, supersymmetric quantum field theories, and other areas of mathematical physics. Birth and education[edit] Witten was born in Baltimore, Maryland. Witten attended the Park School of Baltimore (class of '68), and received his Bachelor of Arts with a major in history and minor in linguistics from Brandeis University in 1971. Witten attended the University of Wisconsin–Madison for one semester as an economics graduate student before dropping out.[4] He returned to academia, enrolling in applied mathematics at Princeton University in 1973, then shifting departments and receiving a Ph.D. in physics in 1976 under David Gross,[4] the 2004 Nobel laureate in Physics. Research[edit] Fields medal work[edit] M-theory[edit] Other work[edit] Awards and honors[edit]

All Batman Animated Feature Films And TV Series Ever Released! - a list by vishakbt1