Mapped: Where Will The Top 10 Cities Be Located in 2035? If you’ve ever flown cross-country in a window seat, chances are, the bright lights at night have caught your eye. 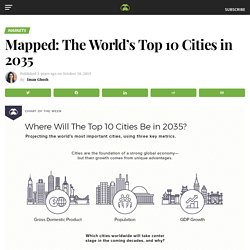 From above, the world tells its own story—as concentrated pockets of bright light keep the world’s economy thriving. Today’s visualization relies on data compiled by CityLab researchers to identify the world’s largest megaregions. The team defines megaregions as: Areas of continuous light, based on the latest night satellite imagery Capturing metro areas or networks of metro areas, with a combined population of 5 million or higherGenerating economic output (GDP) of over $300 billion, on a PPP basis The satellite imagery comes from the NOAA, while the base data for economic output is calculated from Oxford Economics via Brookings’ Global Metro Monitor 2018.

It’s worth pointing out that each megaregion may not be connected by specific trade relationships. From Megalopolis to Megaregion. Shift The Commission on Work, Workers & Technology. Astronauts on the moon and Mars may grow their homes there out of mushrooms, says NASA. Transporting habitats or even the materials for habitats that astronauts can safely inhabit during a lunar mission, or an extended stay on Mars, will be expensive. 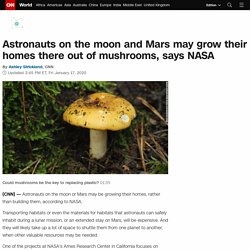 And they will likely take up a lot of space to shuttle them from one planet to another, when other valuable resources may be needed. One of the projects at NASA's Ames Research Center in California focuses on myco-architecture. This would allow for more organic habitats grown from fungi and the threads that comprise their architecture, known as mycelia. The project is part of NASA's Innovative Advanced Concepts program that considers different aspects of life as technology. "Right now, traditional habitat designs for Mars are like a turtle — carrying our homes with us on our backs -- a reliable plan, but with huge energy costs," said Lynn Rothschild, the principal investigator on the early-stage project.

Astronauts could bring a much more compact habitat made from lightweight materials embedded with fungi. The countries projected to gain and lose the most people by 2100. Four of the 10 most populous countries in the world will no longer be among the top 10 in 2100 – and all four will be supplanted by rapidly growing nations in Africa, according to recently released population projections from the United Nations. 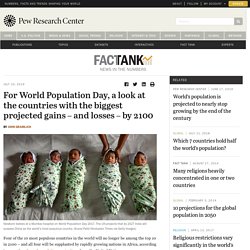 Brazil, Bangladesh, Russia and Mexico are among the world’s 10 most populous countries today. Monkeys Cloned in a World First. The years-long effort, led by Chinese Academy of Sciences postdoctoral fellow Zhen Liu, culminated in the recent birth of two female macaques, Zhong Zhong and Hua Hua. 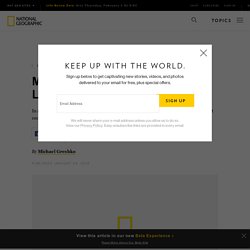 The macaques’ names are drawn from the word zhonghua, an adjective for the Chinese people. The two macaques—eight weeks and six weeks old—are genetically identical, both clones of the same donor culture of fetal monkey cells. The young monkeys are reportedly healthy and currently live in an incubator. The discovery potentially leads to a brave new world of biomedical research and will unquestionably spark debate over cloning another primate species: humans. This map shows where the wealthy — and not so wealthy — of the world live. If you need to see just how much wealth inequality exists across the globe, look no further. 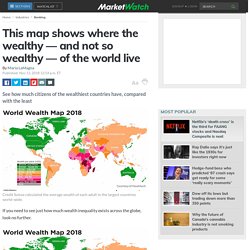 Source: Credit Suisse and HowMuch.net The Credit Suisse Research Institute, a think tank within the Swiss investment bank Credit Suisse, in October published its annual global wealth report. That report estimates the wealth holdings of households around the world, to show wealth distribution across countries. Then, the personal-finance website HowMuch.net used those findings to create a color-coded map of wealth across the world. The result: Iceland, Greenland, Canada, the U.S. and many countries in Europe are literally “in the green” on the map — meaning the average net worth per adult is at least $100,000. The average net worth in Iceland is a stunning $555,700 per adult. In the U.S., average net worth per adult is $404,000. America has two economies—and they’re diverging fast. We’ve been harping for a while on the stark economic divides that define American life in the Donald Trump years. 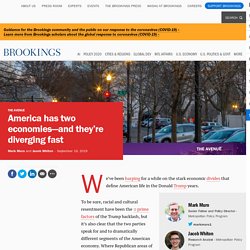 To be sure, racial and cultural resentment have been the prime factors of the Trump backlash, but it’s also clear that the two parties speak for and to dramatically different segments of the American economy. Where Republican areas of the country rely on lower-skill, lower-productivity “traditional” industries like manufacturing and resource extraction, Democratic, mostly urban districts contain large concentrations of the nation’s higher-skill, higher-tech professional and digital services. Yet now comes another wrinkle to the story. IBM's HR Chief Shares Best Advice On The Future Of Work. When it comes to the forefront of the global human resources landscape, Diane Gherson is someone you want to know. 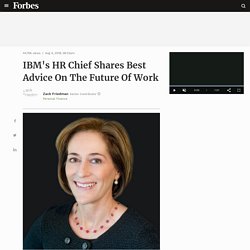 As Chief Human Resource Officer at IBM, Diane has helped to revolutionize IBM over the past 13 years. Under her leadership, she has transformed global workforce outcomes through talent analytics and data, with special emphasis on predictive analytics. Labor 2030: The Collision of Demographics, Automation and Inequality. The analysis and business insights in this report can help leaders put these changes in context and consider the effects they will have on their companies, their industries and the global economy. 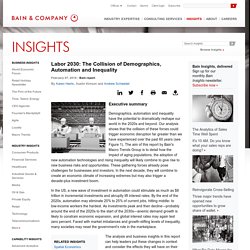 Chapter 1 explores the impact of aging populations and the end of plentiful labor. The baby boomer generation powered a long but temporary surge in labor force growth. Now this group is moving into retirement, and labor force growth is slowing. That, in turn, imperils growth. Chapter 2 examines how automation may solve one problem by increasing productivity and powering growth but creates another by potentially eliminating millions of jobs and suppressing wages for many workers.

Chapter 3 looks at how rising inequality could threaten growth. Tech companies should stop pretending AI won’t destroy jobs. I took an Uber to an artificial-­intelligence conference at MIT one recent morning, and the driver asked me how long it would take for autonomous vehicles to take away his job. 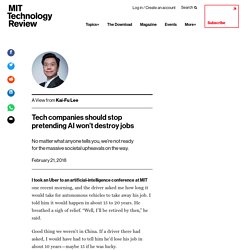 I told him it would happen in about 15 to 20 years. He breathed a sigh of relief. “Well, I’ll be retired by then,” he said. Good thing we weren’t in China. 10 Jobs That Are Safe in an AI World. Computeresque. AIyaiYAIyiyAI. Genomics. Health Research. Robotzone. SCIENCE Breakthroughs. US.A.ID. WorldWide. Reminisce. Eternity. On the Changing Nature of Work & Society.