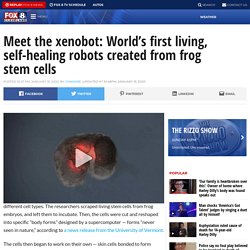 Published at: 3:30 PM, Thu Jan 16 2020 (CNN) — Scientists have created the world’s first living, self-healing robots using stem cells from frogs. Named xenobots after the African clawed frog (Xenopus laevis) from which they take their stem cells, the machines are less than a millimeter (0.04 inches) wide — small enough to travel inside human bodies. These are “entirely new life-forms,” said the University of Vermont, which conducted the research with Tufts University’s Allen Discovery Center. Stem cells are unspecialized cells that have the ability to develop into different cell types. The cells then began to work on their own — skin cells bonded to form structure, while pulsing heart muscle cells allowed the robot to move on its own. The Most Important X-Ray Image Ever Taken Proved The Existence Of Dark Matter. When it comes to the Universe, it mainly generates X-rays through high-temperature heating. 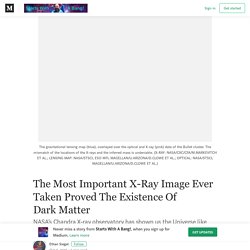 When matter heats up, through collisions, interactions, acceleration or collapse, it can emit X-rays. Galaxy clusters, supernova remnants, active galaxies, binary star systems, and even the Moon emit them. Yet the most important X-ray image of all time was an incredible surprise. Lab Accident Creates the first-ever Permanently Magnetic Liquid. Published on July 30, 2019 Written by Yasemin Saplakoglu The permanently magnetized liquid droplets spin in perfect unison. 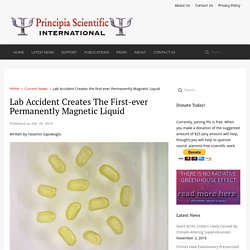 (Xubo Liu et al. Manipulating ultracold matter. Atoms are dependably uniform—you would have a hard time, for instance, telling one rubidium atom from another. 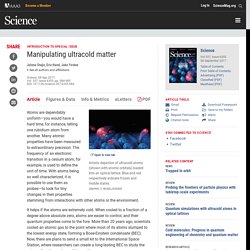 Many atomic properties have been measured to extraordinary precision: The frequency of an electronic transition in a cesium atom, for example, is used to define the unit of time. NASA Engineer Says New Thruster Could Reach 99% Speed of Light. Thruster Buster New Scientist is reporting that NASA engineer David Burns is making some bold claims about a conceptual new spaceship thruster he calls the “helical engine” — a concept the magazine admits “may violate the laws of physics.” 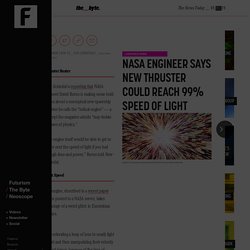 “The engine itself would be able to get to 99 per cent the speed of light if you had enough time and power,” Burns told New Scientist. Light Speed. Fascinating New Interactive Site Tracks How Far Earth’s #1 Radio Hits Have Each Travelled Since 1905. Is this “one of the worst scientific scandals of all time”? Myokines — New Element Training. A Paravascular Pathway Facilitates CSF Flow Through the Brain Parenchyma and the Clearance of Interstitial Solutes, Including Amyloid β. How and where imagination occurs in human brains. Philosophers and scientists have long puzzled over where human imagination comes from. 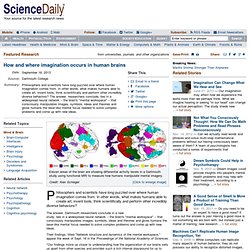 In other words, what makes humans able to create art, invent tools, think scientifically and perform other incredibly diverse behaviors? The answer, Dartmouth researchers conclude in a new study, lies in a widespread neural network -- the brain's "mental workspace" -- that consciously manipulates images, symbols, ideas and theories and gives humans the laser-like mental focus needed to solve complex problems and come up with new ideas. Their findings, titled "Network structure and dynamics of the mental workspace," appear the week of Sept. 16 in the Proceedings of the National Academy of Sciences. "Our findings move us closer to understanding how the organization of our brains sets us apart from other species and provides such a rich internal playground for us to think freely and creatively," says lead author Alex Schlegel , a graduate student in the Department of Psychological and Brain Sciences. 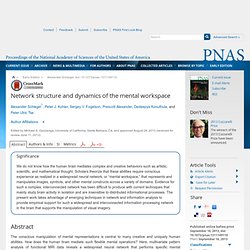 Gazzaniga, University of California, Santa Barbara, CA, and approved August 28, 2013 (received for review June 11, 2013) Significance. Confirmed: New phase of matter is solid and liquid at same time. Solid, liquid, gas … and something else? 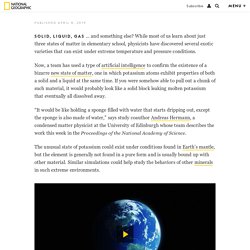 While most of us learn about just three states of matter in elementary school, physicists have discovered several exotic varieties that can exist under extreme temperature and pressure conditions. Now, a team has used a type of artificial intelligence to confirm the existence of a bizarre new state of matter, one in which potassium atoms exhibit properties of both a solid and a liquid at the same time. If you were somehow able to pull out a chunk of such material, it would probably look like a solid block leaking molten potassium that eventually all dissolved away. “It would be like holding a sponge filled with water that starts dripping out, except the sponge is also made of water,” says study coauthor Andreas Hermann, a condensed matter physicist at the University of Edinburgh whose team describes the work this week in the Proceedings of the National Academy of Science.

Leaky crystal Exotic states. Neuroanthropology. This page gathers together several type of resources: our on-site resources to help you explore anthropology and the brain sciences; sites which provide news and info on anthropology and on brain science; some sites which present tutorials or overviews of neuroscience (including brain disorders); and finally some blogs of interest (which need updating, so check our blogroll too…). 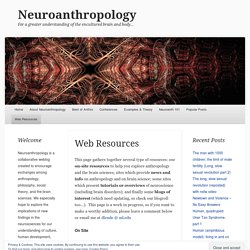 How Beauty Is Making Scientists Rethink Evolution. It’s time for science to abandon the term ‘statistically significant’ The aim of science is to establish facts, as accurately as possible. 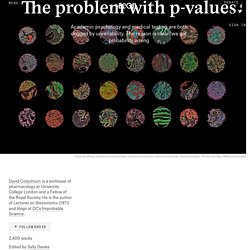 It is therefore crucially important to determine whether an observed phenomenon is real, or whether it’s the result of pure chance. If you declare that you’ve discovered something when in fact it’s just random, that’s called a false discovery or a false positive. And false positives are alarmingly common in some areas of medical science. In 2005, the epidemiologist John Ioannidis at Stanford caused a storm when he wrote the paper ‘Why Most Published Research Findings Are False’, focusing on results in certain areas of biomedicine. Science Isn’t Broken. Graphics by Ritchie King If you follow the headlines, your confidence in science may have taken a hit lately. Peer review? More like self-review. Directory of Open Access Journals. Sci-Hub: removing barriers in the way of science.