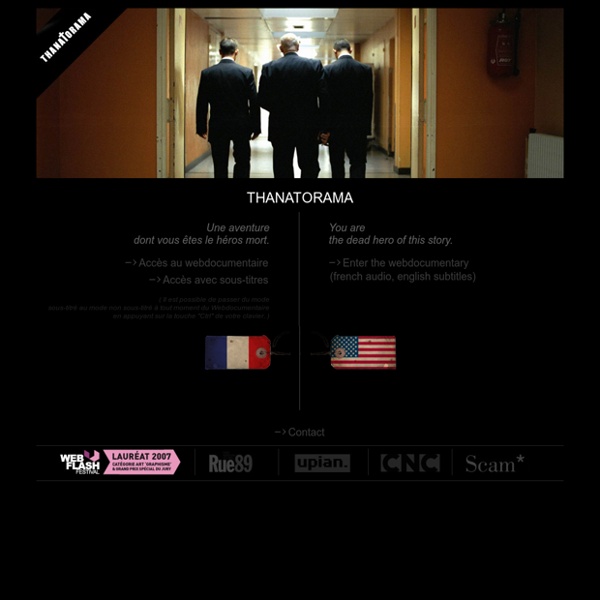 30 Compelling Examples of Visual Storytelling on the Web Storytelling is a powerful approach that can, when done right, compel users to convert more effectively than what any amount of optimization, crazy visual callouts, or awesome interactive elements can do otherwise. Much like how we expect to see a moral at the end of a book, we expect to find a purpose at the end of a site with a storytelling experience. When the path to the “moral of the story” (or conversion point, to be more specific) is laid out clearly in front of our users’ eyes, the rest of the work lies simply in convincing them that the purpose is really worth grabbing on to… which is great since with storytelling, a user is normally in the mindset of learning more about what the story has to offer.

For Want of Water - Topics - Las Vegas Sun — Interactive by Zach Wise Las Vegas was first settled for its springs, springs that made it an oasis in the desert. Although those springs have decades since run dry, water is still the most import resource to Las Vegas and the dry Southwest. And by all indications the region is only going to get dryer. Level 10: Nonlinear Storytelling « Game Design Concepts Last time, we learned some basic linear storytelling principles, as told to us by people that worked with books, plays, and movies. And this is fine and good for games that have a linear story. Many video games work this way, where the story is essentially told as a movie broken up into small parts, and the player has to complete each section of the game to see the next bit of movie. I do not mean this in any kind of derogative way; many popular games work like this, and many players find these games quite compelling. Even personally, I have had times when I would be messing about in the subscreens optimizing my adventuring party, only to have my wife call from across the room: “stop doing that and go fight the next boss so you can advance the plot, already!” However, not all games are like this.

101 Years of Tour de France Globalization This year is the 101st edition of the Tour de France. What was once a predominantly French race—created to up the sales of the sports newspaper L’Auto—is now a global competition, with riders from 34 countries joining the race. Here’s a geographic look at every rider, every race. By Xaquín G.V., Kelsey Nowakowski, Anna Scalamogna, and Joey Fening, NG staff; Art by Álvaro Valiño.Sources: Le Tour, Bill McGann of BikeRaceInfo.com A French affair goes global In 1903 the pack is mostly blue, white, and red: 72 of the 83 cyclists are French. OTL: The Long, Strange Trip of Dock Ellis - MLB In the mid-1990s, Pierce was invited to work at an old-timers' baseball fantasy camp in Reno, Nev. Ellis was there. So was Blue, who did end up starting against Ellis in the 1971 All-Star Game. And Bobby Tolan, another former big leaguer, who had played with Ellis and Pierce on a youth squad in Los Angeles.

Farmers’ Market Recipe Generator 1 1/8 cups flour, more for rolling the dough Salt and pepper 1 teaspoon fresh rosemary leaves 1 stick butter Syrian Journey: Choose your own escape route - BBC News The Syrian conflict has torn the country apart, leaving thousands dead and driving millions to flee their homes. Many seek refuge in neighbouring countries but others pay traffickers to take them to Europe - risking death, capture and deportation. If you were fleeing Syria for Europe, what choices would you make for you and your family? Take our journey to understand the real dilemmas the refugees face. The routes, options and outcomes in this Syrian Journey feature were based on real stories uncovered by extensive research as part of a BBC Arabic digital project exploring migration from Syria. Research by Mamdouh Akbiek, Eloise Dicker