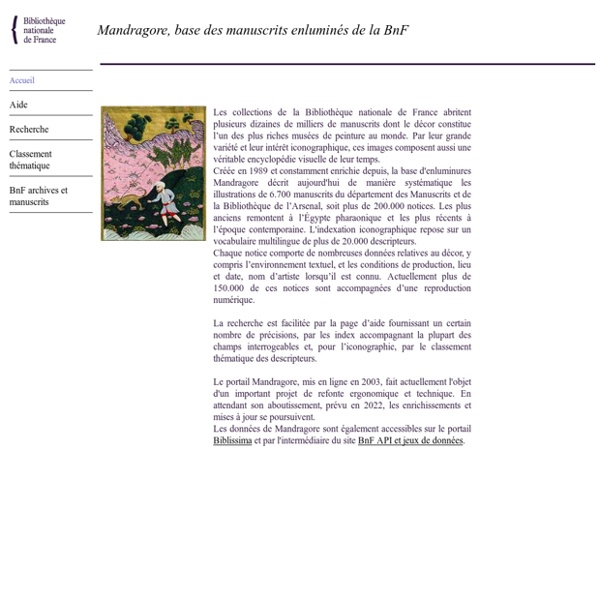 Manuscript Facsimiles (University of Notre-Dame) Medieval Manuscripts in Facsimile Based on an exhibit prepared by Dr. Marina Smyth, Librarian of the Medieval Institute with the assistance of Catherine Kavanagh and Kathleen Tonry, graduate students in the Medieval Institute In the Exhibit Room of the Department of Special Collections, on the ground floor of the Hesburgh Library at the University of Notre Dame Summer & Fall 1997 Introduction Bibliotheca Philadelphiensis Lehigh University, Special Collections, Lehigh Codex 10. Naples, Italy, Second half 15th century. This late fifteenth-century manuscript, written on paper, contains a compilation of alchemical texts assembled and copied by Arnold of Brussels. For the most part, it was made in Naples between 1472 and 1490, as often noted at the end of works (for example, fols. 149r, 182v, 196v).

Introduction to Western Manuscripts at Dartmouth College The origins of the College's early manuscript collection are undocumented. Imprecise acquisition records of the nineteenth century indicate that some single leaves were acquired by gift at least as early as the presidency of Samuel Colcord Bartlett (1877-1892). It is known that President Bartlett brought materials back from the Middle East and Europe for the Library's collections and the first early manuscripts may well have been acquired at that time. The impetus to develop a significant collection of early manuscripts for teaching purposes lies with the work of Harold Goddard Rugg, sometime Assistant Librarian of the College. Mr. Rugg labored for nearly fifty years to develop a small but rich collection of early manuscripts so that students at Dartmouth could examine and study materials from all eras of the history of the written word.

Medieval Manuscripts (Free Library of Philadelphia) Our manuscript collection includes most of the kinds of books used between 1000 and 1500 A.D.: prayer books and poetry, Bibles and political propaganda, philosophical works, and fantastic histories. Some manuscripts are elaborate and beautiful works of art; others are humble "owner-produced" books, copied out from a borrowed copy by someone who needed a particular text. Each one tells us something about a long-vanished age. The Free Library’s digital manuscript collection includes two different sorts of objects: complete manuscript books, or “codices,” and separate leaves and cuttings—fragments separated from their original contexts. With the images you will find basic information about the object pictured: when and where it was made, and what its imagery depicts.