The Science of Stress, Orgasm and Creativity: How the Brain and the Vagina Conspire in Consciousness 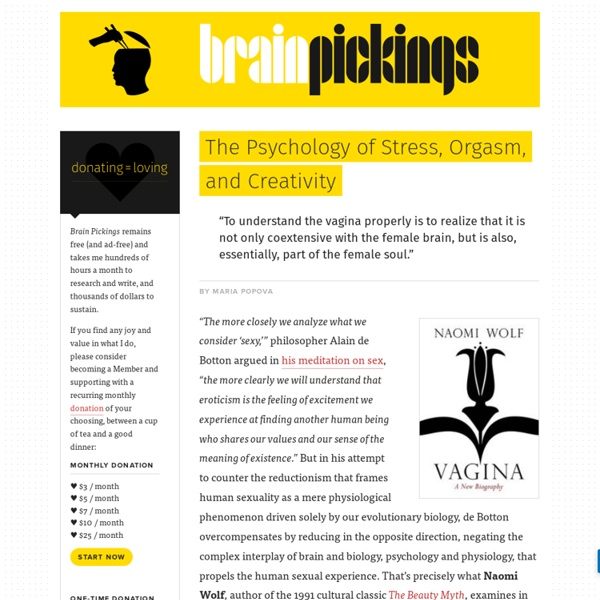 “The more closely we analyze what we consider ‘sexy,’” philosopher Alain de Botton argued in his meditation on sex, “the more clearly we will understand that eroticism is the feeling of excitement we experience at finding another human being who shares our values and our sense of the meaning of existence.” But in his attempt to counter the reductionism that frames human sexuality as a mere physiological phenomenon driven solely by our evolutionary biology, de Botton overcompensates by reducing in the opposite direction, negating the complex interplay of brain and biology, psychology and physiology, that propels the human sexual experience. That’s precisely what Naomi Wolf, author of the 1991 cultural classic The Beauty Myth, examines in Vagina: A New Biography (public library) — a fascinating exploration of the science behind the vastly misunderstood mind-body connection between brain and genitalia, consciousness and sexuality, the poetic and the scientific. Wolf writes:

The Overthinker's Guide to Dancing at Parties Okay, everyone else is dancing. It's going to be fine. You don't want to be the weirdo who's so self-conscious they can't even enjoy a little dancing. Let's do this. This is going great! Huh. Whatever, joke dance moves aren't that funny after a while. Wait, is it even POSSIBLE for you to dance seriously? Ugh, you hate when the popular girls do that thing where they grab another girl's hand to dance one-on-one with them. No, stop overthinking. Where are you supposed to look? Oh, thank God, everyone's jumping up and down with the chorus. You just need to stop worrying what other people think. Oh god, now all of a sudden everyone is joke-grinding. This is a pretty sexy song, though. Well, try not to like it THAT much. I mean, not that expressing yourself through your body is gross. And anyway, there is no way to dance seriously without it being sexual. Uh-oh. ...You should probably go get another drink.

What Everyone Needs To Know About Their Chakras Each of the seven chakras are governed by spiritual laws, principles of consciousness that we can use to cultivate greater harmony, happiness, and wellbeing in our lives and in the world. The First Center: The Root Chakra The root chakra, known in Sanskrit as muladhara, is located at the base of the spine. It governs your most basic survival needs. The spiritual Law of Karma governs the first energy center. Consider the possibilities in front of you and listen to signals from your body. The Second Center: Creativity Chakra The creativity chakra, called svadhishtana, is associated with creativity in all its expressions. The Law of Least Effort is lively in the second chakra. For example, when a composer creates a new piece of music, he is using the same notes in a new relationship with one another other, resulting in the emergence of something that did not exist before. The Third Center: Energy Chakra The energy chakra, manipura, is localized in your solar plexus.

How Mind-Wandering and “Positive Constructive Daydreaming” Enhance Creativity and Improve Our Social Skills by Maria Popova The science of why fantasy and imaginative escapism are essential elements of a satisfying mental life. Freud asserted that daydreaming is essential to creative writing — something a number of famous creators and theorists intuited in asserting that unconscious processing is essential to how creativity works, from T. S. Eliot’s notion of “idea incubation” to Alexander Graham Bell’s “unconscious cerebration” to Lewis Carroll’s “mental mastication.” In a recent paper titled “Ode to Positive Constructive Daydreaming” (PDF), published in the journal Frontiers in Psychology, writer Rebecca McMillan and NYU cognitive psychologist Scott Kaufman, author of Ungifted: Intelligence Redefined, revisit Singer’s work to deliver new insights into how the first style of Singer’s mind-wandering, rather than robbing us of happiness, plays an essential, empowering role in daily life and creativity. My highlights from Anaïs Nin's diary, illustrated by Lisa Congdon. Thanks, Scott Myers

On the Origin of Truly Innovative Ideas Last week, I wrote about increasing innovation in your company. This week, in Part 2, we'll talk about how to create the right environment and incentives for innovation to flourish. Today's post outlines a few key ideas and strategies I've found to be extremely effective. Fear of Failure = Fear of Innovation The day before something is truly a breakthrough, it's a crazy idea. But few companies actually try crazy ideas — especially the most successful ones. Fear of failure paralyzes creativity, stops risk-taking, and ultimately slows innovation down to a halt. Why do people fear failure? Three principal reasons… Fear impacting their reputation: “If I fail, I won’t get the promotion.”Fear of losing time: “I’ve invested two years of my life, we can’t fail now!” How do you minimize fear of failure? The right environment and the right incentives. The 5-5-5 Program Here's the basic idea: Teams of 5: Break your company (division, group, etc.) into teams of five people. Why 5 people? Peter Diamandis Dr. Dr.

13 Places To Hide Your Vibe Oh, the joys of family: this weekend my conservative older sister is coming to visit, which means I’ve got to get my act together. Sweep the floor. Hide the Percosets. And for God’s sake, unplug the vibrator. Luckily I have a designated “goodie drawer” where I keep my toys, but in high school I hid my very first vibe amongst my undies and prayed that neither of my parents ever tried to put away my laundry. Snoopers be snoopin’ and a girl’s gotta be prepared. Cookie jarIn this awful hide-a-vibe bearInside the tissue box next to the bedIn the freezerUnder the mattress (like the princess and the pea!) Do you have a friggin’ brilliant place you hide your toy(s)? 10 Eating Rules French Children Know (But Most Americans Don't) How the French eat, age, dress, raise their children and live in general is a real talking point these days. So, as an American mother of three half-French kids, I figured I'd add my two cents to the conversation. I lived in France before becoming a parent, but eventually it was my kids who taught me everything I need to know about eating like a French person: Eating, and staying slim and healthy, isn't just about what you eat, but also how, when and why. Yes, French people enjoy junk food occasionally, and sometimes they eat between meals, but people don’t just let loose every day. There's a code of conduct for food, for big people and little ones alike. 1. Three meals a day, plus the children’s traditional after-school “gouter,” or snack, which might be a pain au chocolat, fruit or applesauce. When mealtimes roll around, you eat with real pleasure because you’re hungry. 2. Starter course: Lentil salad Main course: Roasted chicken, green beans Cheese course: Vanilla yogurt 3. 4. 5. 6. 7.

The Neuroscience of Mathematical Beauty | Beautiful Minds, Scientific American Blog Network Mathematics, rightly viewed, possesses not only truth, but supreme beauty” — Bertrand Russell The latest neuroscience of aesthetics suggests that the experience of visual, musical, and moral beauty all recruit the same part of the “emotional brain”: field A1 of the medial orbitofrontal cortex (mOFC). But what about mathematics? Plato believed that mathematical beauty was the highest form of beauty since it is derived from the intellect alone and is concerned with universal truths. Similarly, the art critic Clive Bell noted: “Art transports us from the world of man’s activity to a world of aesthetic exaltation. A new study suggests that Bell might be right. This equation was most consistently rated as beautiful (Leonhard Euler’s identity): Other winners of the equation beauty contest included the Pythagorean identity, the identity between exponential and trigonometric functions derivable from Euler’s formula for complex analysis, and the Cauchy-Riemann equations. Lots of food for thought!

Artists 'have structurally different brains' 17 April 2014Last updated at 05:35 ET By Melissa Hogenboom Science reporter, BBC Radio Science Brain scans revealed artists have more grey matter in parts of their brains Artists have structurally different brains compared with non-artists, a study has found. Participants' brain scans revealed that artists had increased neural matter in areas relating to fine motor movements and visual imagery. The research, published in NeuroImage, suggests that an artist's talent could be innate. But training and environmental upbringing also play crucial roles in their ability, the authors report. As in many areas of science, the exact interplay of nature and nurture remains unclear. Lead author Rebecca Chamberlain from KU Leuven, Belgium, said she was interested in finding out how artists saw the world differently. In their small study, researchers peered into the brains of 21 art students and compared them to 23 non-artists using a scanning method called voxel-based morphometry. Alice Shirley - artist