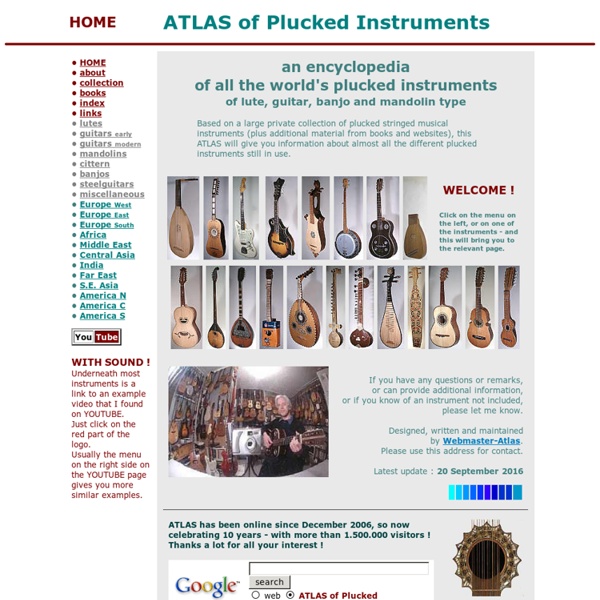 How Stringed Instruments Work - The Method Behind the Music Some of the simpler instruments are the string instruments. String instruments make sound with vibrating strings, and the pitch is modified by the thickness, tension, and length of the string. String instruments can be played in many ways, and come in many variations. String instruments range from the simple lyre, to the modern guitar, violin, and piano. All rely on the sound of strings. Ubuntu Linux 12.04 One-Ups Windows and Mac, Shuttleworth Says The first beta version of Ubuntu Linux 12.04 “Precise Pangolin” was launched late last week, giving fans of the free and open source operating system an early glimpse at what to expect in the final release due next month. A number of changes and enhancements are already visible, as I noted last week, including the hotly anticipated Head-Up Display (HUD) interface. Also making this Ubuntu a notable one is the fact that it's a Long Term Support (LTS) release and will be supported for a full five years.

Relative key Circle of fifths showing major and minor keys Relative tonic chords on C and A ( Play ). Products : Overview How Music Works is a comprehensive suite of multimedia tutorials which explain music in clear, simple language you can relate to. Packed with 115 topics in nine tutorials, and illustrated with 360 diagrams and 750 demonstration sounds, the tutorials start with the very basics of music and advance to topics which are valuable even for professional musicians. Whatever musical instrument or style you are interested in, these tutorials will be an essential source of information and guidance for years to come. Strings, standing waves and harmonics The animation shows the interaction of two waves, with equal frequency and magnitude, travelling in opposite directions: blue to the right, green to the left. The red line is their sum: the red wave is what happens when the two travelling waves add together (superpose is the technical term). By stopping the animation, you can check that the red wave really is the sum of the two interacting travelling waves. The figure at right is the same diagram represented as a time sequence - time increases from top to bottom. You could think of it as representing a series of photographs of the waves, taken very quickly. The red wave is what we would actually see in a such photographs.

Food Nutrition Facts - Healthy Living Tips at WomansDay Every child has heard the healthy-eating mantra "You are what you eat." But there may be a closer resemblance between good-for-you grub and your body than you thought. We found 10 foods that mirror the body parts they provide nutrients for—for example, brain-boosting walnuts actually look like a brain. Free Music Theory Worksheets! Material on this page is free.NEW! you can now consult an index of terms used in these worksheets.Also explore a page of worksheet extras: Worksheet Answers, Test Templates and Flash Presentations. Here are some testimonials from music teachers about these workbook chapters: I have been using your fantastic music theory sheets and PDF downloads to teach high school piano theory to 28 students per class, all of whom are at different levels of study and accomplishment. Your method is comprehensive and easily accessible to students of all ages. What a great philanthropist and talented musician you are and it is indeed a pleasure to have discovered that I can thank you (in person) on Facebook ...

7 Steps to Setting Up Your Guitar In this tutorial I will explain step-by-step how to set up your guitar to get perfect intonation. Having your guitar "in tune" is a perfect goal for any luthier or the guitarist himself. Poor intonation can be heard whenever we play a chord or play solo on high frets. But you can tune your guitar to achieve a more powerful sound than ever. ArtsAlive.ca Music The instruments of the string section are crafted by carefully carving, shaping and glueing wood pieces together, and covering them with several coats of varnish. No nails or screws are used at all. Each instrument has four strings, the vibrations of which makes the instrument sound. The World's Healthiest Foods 100 foods that can serve as the basis of your Healthiest Way of Eating. Links to the articles about these foods can be found below. In addition to questions about our foods, we often get asked about beverages and sweeteners. In the beverage category, water and green tea have been especially popular topics, and in the sweetener category, so have blackstrap molasses, honey and maple syrup. Of course, there are many other nutritious foods other than those that we have included on our list that we feel are wonderful, health-promoting foods; if there are other whole foods - such as fruits, vegetables, nuts/seeds, whole grains, etc - that you like, by all means enjoy them.

El Sistema El Sistema is a publicly financed voluntary sector music education program in Venezuela, founded in 1975 by economist and musician José Antonio Abreu under the name of Social Action for Music. For many years its official name was Fundación del Estado para el Sistema Nacional de las Orquestas Juveniles e Infantiles de Venezuela, (FESNOJIV), which is sometimes translated into English as "National Network of Youth and Children's Orchestras of Venezuela". It has recently changed to Fundación Musical Simón Bolívar (FMSB) but it is still widely known by the FESNOJIV acronym.[1]