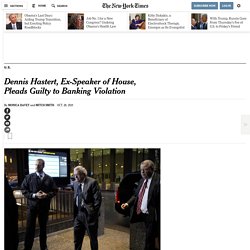 Hastert acknowledged that he had given Individual A a total of $1.7 million before his indictment. After being questioned by banking authorities about large withdrawals in 2012, Mr. Dennis Hastert’s stunningly hypocritical 1998 speech about impeaching Bill Clinton. In this photo dated Oct. 25, 1975, taken from a newspaper page, Hastert watches as University High School coach George Girardi, bottom left, demonstrates a move on Yorkville assistant Tony Houle. 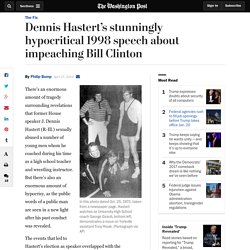 (Pantagraph via AP) There's an enormous amount of tragedy surrounding revelations that former House speaker J. Dennis Hastert (R-Ill.) sexually abused a number of young men whom he coached during his time as a high school teacher and wrestling instructor. But there's also an enormous amount of hypocrisy, as the public words of a public man are seen in a new light after his past conduct was revealed. The events that led to Hastert's election as speaker overlapped with the impeachment of then-President Bill Clinton. List of federal political scandals in the United States - Wikipedia. This article provides a list of federal political scandals of the United States, sorted from most recent date to least recent. 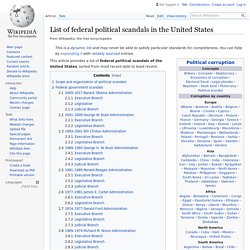 Scope and organization of political scandals[edit] The article is organized by presidential terms and then divided into scandals of the federal Executive, Legislative and Judicial Branches. Members of both parties are listed under the term of the president in office at the time the scandal took place. Persons were either elected or appointed. Log In. SHOCK: Trump Accused Of Rape, Clinton Connected To Same Billionaire Pedophile. New Witness Comes Forward In Rape Lawsuit Against Donald Trump But Mainstream Media Will NOT Speak A Word Of It. As CNN reported today that old Playboy videos have surfaced with cameos by Donald Trump (fully clothed), I once again thought about how STRANGE it is that they have no interest in the current federal civil suit saying Trump raped a 13 year-old girl. 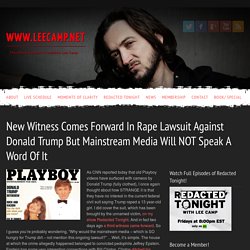 I did cover the suit, which has been brought by the unnamed victim, on my show Redacted Tonight. And in fact two days ago a third witness came forward. New Hampshire Republican lawmaker arrested, charges of drugs and trying to lure 14-year-old girl. New Hampshire Rep. 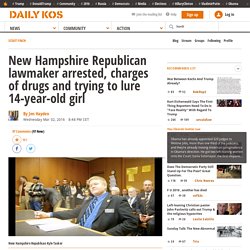 Kyle Tasker is behind bars after he was arrested on very serious charges: Tasker, 30, of 87 Smoke St., faces four felony charges following his arrest Tuesday in Nottingham.He is charged with certain uses of computer services prohibited for allegedly using Facebook Messenger to arrange a meeting with an underage girl with the intent to commit aggravated felonious sexual assault. Tasker also faces three felony drug charges accusing him of possessing marijuana, hallucinogenic mushrooms and the drug Soboxone with the intent to sell.

The teenage girl turned out to be an undercover police officer. Donald Trump's Plane Witness a self-admitted child pimp. Folks, we’re through the looking glass here. 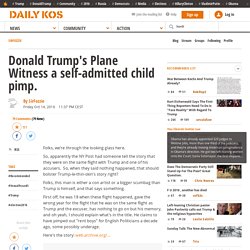 So, apparently the NY Post had someone tell the story that they were on the same flight with Trump and one of his accusers. "We All Knew About the Trafficking"-The Untold Story of Trump Model Management (Part 1) As they approached the end of the 1970’s the two men were on very different trajectories. 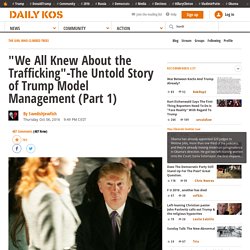 Donald Trump met, and started dating, Czech model Ivana Zelníčková- a woman who, despite his later claims that she was a supermodel, was in reality barely making a living posing in her bikini at trade shows at the time they met.

Ken Starr, Who Led the Sexual Inquisition Against Bill Clinton, Suddenly Embroiled in Major University Scandal. Photo Credit: Wikimedia Commons Kenneth Starr, the former Independent Counsel who led the investigation that ultimately resulted in the impeachment of President Bill Clinton, now finds himself intricately involved in yet another sex scandal—this one pertaining to his tenure as president of Baylor University. 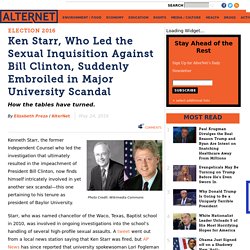 Starr, who was named chancellor of the Waco, Texas, Baptist school in 2010, was involved in ongoing investigations into the school’s handling of several high-profile sexual assaults. A tweet went out from a local news station saying that Ken Starr was fired, but AP News has since reported that university spokewsoman Lori Fogleman refuted that claim in an email, saying, "Ken Starr is president and chancellor of Baylor University. 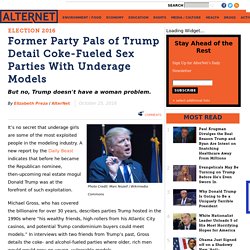 List of federal political sex scandals in the United States - Wikipedia. Over the centuries, many sex scandals have involved incumbent United States federal elected politicians, as well as persons appointed with the consent of the U.S. 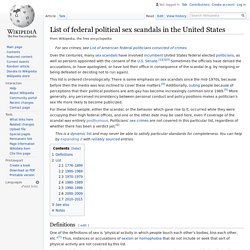 Senate.[1][2][3] Sometimes the officials have denied the accusations, or have apologized, or have lost their office in consequence of the scandal (e.g. by resigning or being defeated or deciding not to run again). This list is ordered chronologically. There is some emphasis on sex scandals since the mid-1970s, because before then the media was less inclined to cover these matters.[4] Additionally, outing people because of perceptions that their political positions are anti-gay has become increasingly common since 1989.[5] More generally, any perceived inconsistency between personal conduct and policy positions makes a politician's sex life more likely to become publicized.

Definitions[edit] List of United States Senators expelled or censured - Wikipedia. The United States Constitution gives the Senate the power to expel any member by a two-thirds vote. This is distinct from the impeachment power the Senate has over executive and judicial federal officials. The Senate concluded in 1798 that Senators could not be impeached, but only expelled, while conducting the impeachment trial of William Blount, who had already been expelled.[1] Expulsion is an extremely rare event.

List of United States Representatives expelled, censured, or reprimanded - Wikipedia. The United States Constitution (Article 1, Section 5)[1] gives the House of Representatives the power to expel any member by a two-thirds vote. Expulsion of a Representative is rare: only five members of the House have been expelled in its history. Three of those five were expelled in 1861 for joining the Confederate States of America.[2] The Men Behind Trump’s Attacks On Clinton Marriage Have A History Of Sexual Harassment, Spousal Abuse, And Marital Infidelity.

Republican presidential nominee Donald Trump’s campaign is circulating talking points that instruct his supporters and campaign surrogates to attack Democratic nominee Hillary Clinton over Bill Clinton’s marital infidelity. If the media is going to report on those claims they should also note that Trump and his closest advisers are profoundly poor messengers for those claims. According to CNN, one talking point says, “Hillary Clinton bullied and smeared women like Paula Jones, Gennifer Flowers and Monica Lewinsky.” Child Abuse. Pizzagate. Social Forces.