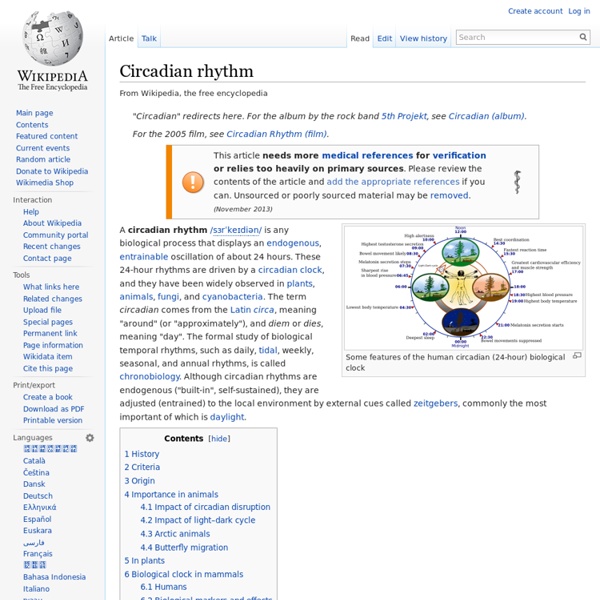 Some features of the human circadian (24-hour) biological clock History[edit] The earliest recorded account of a circadian process dates from the 4th century B.C.E., when Androsthenes, a ship captain serving under Alexander the Great, described diurnal leaf movements of the tamarind tree.[1] The observation of a circadian or diurnal process in humans is mentioned in Chinese medical texts dated to around the 13th century, including the Noon and Midnight Manual and the Mnemonic Rhyme to Aid in the Selection of Acu-points According to the Diurnal Cycle, the Day of the Month and the Season of the Year.[2] The first recorded observation of an endogenous circadian oscillation was by the French scientist Jean-Jacques d'Ortous de Mairan in 1729. The term circadian was coined by Franz Halberg in the 1950s.[10] Criteria[edit] To be called circadian, a biological rhythm must meet these three general criteria:[11] Origin[edit] The simplest known circadian clock is that of the prokaryotic cyanobacteria.

The Open Organisation Of Lockpickers :: Meetings This is a repository of the most up-to-date versions of Deviant's lock diagrams and animations. Seen in all of the TOOOL educational materials and slide decks, these files are all released under the Creative Commons license. You are free to use any of them for non-commercial purposes, as long as they are properly attributed and the same freedom for others is maintained in all derivative works. Please note that these diagrams have evolved and developed over time. While Deviant is still proud of the older versions of his images, if you still have copies of legacy material they should all be replaced with the latest versions available here. Lock Basics and Mechanical Operation How pin tumblers are arranged and how locks operate (or fail to) with conventional keys Introduction to Lockpicking Overview of why lock picking is possible and the use of basic pick tools Manipulation-Resistant Locks Spool pins, mushroom pins, and other ways of increasing security Diagrams of Bumping Attacks

How To Take Photos From the Edge of Space For $150 MIT students build a high-altitude, photo-snapping balloon using off-the-shelf components Icarus Touches the Edge: A $150 view of space 1337arts Scientists and students alike have previously launched low-budget balloons that rise to the upper reaches of Earth's atmosphere, snapping unbelievable photos from near-space. But MIT's Icarus team managed the same feat using only off-the-shelf items, and for a measly cost of $150. Here's how they did it. The MIT students list everything that they used to assemble the launch vehicle, including a prepaid Motorola i290 phone with GPS, a cell phone charger and disposable hand warmers to keep everything operable at the cold high altitudes. "We bought a AA-battery cell phone charger to sustain the phone’s power over the duration of the flight, and we used Energizer lithium batteries (rated to operate at temperatures are low as -40F) to power both this charger as well as our camera," the Icarus team wrote on their website. [via 1337arts ]

Inside the Ghost Ships of the Mothball Fleet | Beyond the Photos For decades, dozens of forgotten Navy and merchant ships have been corroding in Suisun Bay, 30 miles northeast of San Francisco. These historic vessels—the Mothball Fleet—served their country in four wars: WWII, the Korean War, the Vietnam War, and Desert Storm. After a decade of impasse, the ghost fleet is slowly dwindling as the ships are towed out one-by-one for scrapping. About 15 retired ships are already gone; by 2017, the entire fleet will be just a memory. Over a two-year period, several close friends and I gained unprecedented access to the decaying ships, spending several days at a time photographing, documenting, and even sleeping aboard them—often in the luxury of the captain’s quarters. Sneaking on-board required months of planning and coordination, and it involved taking significant risks. History and Current State These ghost ships, part of the National Defense Reserve Fleet (NDRF) overseen by the U.S. Guns on the deck of the USS Iowa. Ticking Environmental Time Bombs

Chronobiology Chronobiology is a field of biology that examines periodic (cyclic) phenomena in living organisms and their adaptation to solar- and lunar-related rhythms.[1] These cycles are known as biological rhythms. Chronobiology comes from the ancient Greek χρόνος (chrónos, meaning "time"), and biology, which pertains to the study, or science, of life. The related terms chronomics and chronome have been used in some cases to describe either the molecular mechanisms involved in chronobiological phenomena or the more quantitative aspects of chronobiology, particularly where comparison of cycles between organisms is required. Chronobiological studies include but are not limited to comparative anatomy, physiology, genetics, molecular biology and behavior of organisms within biological rhythms mechanics.[1] Other aspects include development, reproduction, ecology and evolution. Description[edit] The circadian rhythm can further be broken down into routine cycles during the 24-hour day:[2] History[edit]

Wild Polar Bear vs Dogs Norbert Rosing took these images of a wild polar bear coming upon his tethered sled dogs in the wilds of Canada's Hudson Bay. The Polar Bear returned every night that week to play with the dogs. Excessive daytime sleepiness Excessive daytime sleepiness (EDS) is characterized by persistent sleepiness and often a general lack of energy, even after apparently adequate or even prolonged night time sleep. EDS can be considered as a broad condition encompassing several sleep disorders where increased sleep is a symptom, or as a symptom of another underlying disorder like narcolepsy, sleep apnoea or a circadian rhythm disorder. Some persons with EDS, including those with hypersomnias like narcolepsy and idiopathic hypersomnia, are compelled to nap repeatedly during the day; fighting off increasingly strong urges to sleep during inappropriate times such as while driving, while at work, during a meal, or in conversations. As the compulsion to sleep intensifies, the ability to complete tasks sharply diminishes, often mimicking the appearance of intoxication. Diagnosis[edit] A number of tools for screening for EDS have been developed. Causes[edit] EDS can be a symptom of a number of factors and disorders.

8 totally awesome natural phenomena you probably didnt know about | ZME Science The Maelstrom When you hear a name like maelstrom, you just know it’s about something wicked. Introduced in English by Edgar Allan Poe from the Nordic languages, from which it came from the Dutch word maelstrom (maalstroom in modern spelling), it literally means crushing current, which is quite a very good description. digital representation of a maelstrom A maelstom is basically a very big and powerful whirlpool, a free vortex; a free vortex with quite a downdraft. Fire Rainbow The term ‘fire rainbow’ is really misleading; the correct term is circumhorizon arc. Of course, this rainbow is not formed the way ‘classic’ rainbows are formed. Waterspouts Waterspouts seem to be taken out of the Captain Planet series. Most of the time, they are weaker than land tornadoes, but some are extremely big and bring the water upward with immense speed and power. They can actually be tornadic or non-tornadic. The even rarer ‘cousin’ of the waterspout is the snowspout (or icespout). The Honduran Rain of Fish

Non-24-hour sleep-wake disorder Non-24-hour sleep–wake disorder (non-24), is one of several types of chronic circadian rhythm sleep disorders (CRSDs). It is defined as a "complaint of insomnia or excessive sleepiness related to abnormal synchronization between the 24-hour light–dark cycle and the endogenous circadian rhythms of sleep and wake propensity."[1] Symptoms result when the non-entrained (free-running) endogenous circadian rhythm drifts out of alignment with the desired or conventional sleep–wake schedule. However, the sleep pattern can be quite variable; some individuals adopt a sleep pattern that is congruent with their free-running circadian clock, shifting their sleep times (usually later), thereby minimizing their sleep symptoms but suffering major social and occupational consequences. Though often referred to as non-24, it is also known by the following terms: Mechanisms[edit] The circadian clock modulates many physiological rhythms. Characteristics[edit] Sighted[edit] Blind[edit] Symptoms[edit] Blind[edit]

Everyday tricks everyone should know Daily Kitten Chat Forum Tricks every woman should know…Nik The last several are a few of my own I’ve discovered… Peel a banana from the bottom and you won’t have to pick the little ‘stringy things’ off of it. Take your bananas apart when you get home from the store. If you leave them connected at the stem, they ripen faster. Store your opened chunks of cheese in aluminum foil. It will stay fresh much longer and not mold! Peppers with 3 bumps on the bottom are sweeter and better for eating. Peppers with 4 bumps on the bottom are firmer and better for cooking. Add a teaspoon of water when frying ground beef. It will help pull the grease away from the meat while cooking. To really make scrambled eggs or omelets rich add a Couple of spoonfuls of sour cream, cream cheese, or heavy cream in beat them up. For a cool brownie treat, make brownies as directed. Leftover snickers bars from Halloween make a delicious dessert. chop them up with the food chopper. Peel, core and slice a few apples. for 15 minutes!!! Easy Deviled Eggs gone.