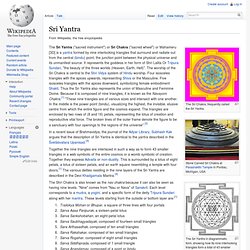 The Sri Yantra in diagrammatic form, showing how its nine interlocking triangles form a total of 43 smaller triangles. In a recent issue of Brahmavidya, the journal of the Adyar Library, Subhash Kak argues that the description of Sri Yantra is identical to the yantra described in the Śvetāśvatara Upanisad.[3] Together the nine triangles are interlaced in such a way as to form 43 smaller triangles in a web symbolic of the entire cosmos or a womb symbolic of creation. Together they express Advaita or non-duality. This is surrounded by a lotus of eight petals, a lotus of sixteen petals, and an earth square resembling a temple with four doors.[1] The various deities residing in the nine layers of the Sri Yantra are described in the Devi Khadgamala Mantra.[4] The Shri Chakra is also known as the nav chakra because it can also be seen as having nine levels. 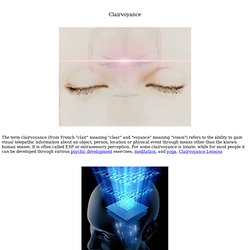 It is often called ESP or extrasensory perception. For some clairvoyance is innate, while for most people it can be developed through various psychic development exercises, meditation, and yoga. Clairvoyance Lessons To understand how all psychic abilities work, is to understand the nature of reality as a consciousness hologram, in which we vicarious experience. Live Like You Come From the Future. “One does not become enlightened by imagining figures of light, but by making the darkness conscious.” – Carl Jung Ian MacKenzieActivist Post APOCALYPTICISM is an actual word. 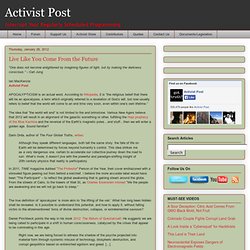 According to Wikipedia, it is “the religious belief that there will be an apocalypse, a term which originally referred to a revelation of God’s will, but now usually refers to belief that the world will come to an end time very soon, even within one’s own lifetime.” The idea that “the world will end” is not limited to fire and brimstone. Various New Agers believe that 2012 will result in an alignment of the galactic something or other, fulfilling the Hopi prophecy of the Blue Kachina and the reversal of the Earth’s magnetic poles…and stuff…then we will enter a golden age. Darin Drda, author of The Four Global Truths, writes: Although they speak different languages, both tell the same story: the fate of life on Earth will be determined by forces beyond humanity’s control.

But that’s not enough. Thomas continues: Fibinacci numbers by Ken Nordine. Math Tools Browse. Little Grandmother « Church of the Cosmos : Temple of Light. The Wisdom Keepers tell us we are living in spectacular times in which only the strongest amongst our respective soul groups is represented here on Earth (i.e. 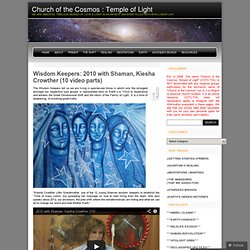 YOU) to experience and witness the Great Dimensional Shift and the return of the Family of Light. It is a time of awakening, of unveiling great truths. “Kiesha Crowther Little Grandmother, one of the 12 young Shaman wisdom keepers to establish the ‘Tribe of many colors’ [is] spreading her message on how to start living from the heart. She also speaks about 2012, our ancestors, the pole shift, where the extraterrestrials are hiding and what we can do to change our world and heal Mother Earth.” Like this: Like Loading...

Star Warriors - The Hopis & the Greys. Enlightenment (spiritual) Enlightenment refers to the "full comprehension of a situation". 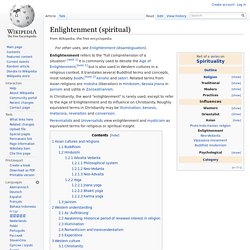 [web 1] It is commonly used to denote the Age of Enlightenment,[note 1] but is also used in Western cultures in a religious context. It translates several Buddhist terms and concepts, most notably bodhi,[note 2] kensho and satori. Related terms from Asian religions are moksha (liberation) in Hinduism, Kevala Jnana in Jainism and ushta in Zoroastrianism. Perennialists and Universalists view enlightenment and mysticism as equivalent terms for religious or spiritual insight.

The English term "enlightenment" has commonly been used to translate several Sanskrit, Pali,[web 2] Chinese and Japanese terms and concepts, especially bodhi, prajna, kensho, satori and buddhahood. Bodhi is a Theravada term. Prajna is a Mahayana term. In Zen, kensho means "seeing into one's true nature". Buddhahood is the attainment of full awakening and becoming a Buddha.

[means] full awakening; buddhahood. Vivekenanda's modernisation has been criticized: We Are The Wanderers. Hindu.