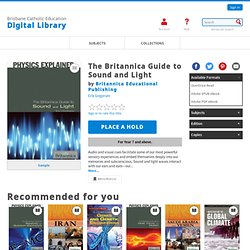 Action=AuthCheck&ForceLoginFlag=0&URL=WaitingListForm.htm%3FID=BCE89553-8AFD-4853-9CB2-432F82DDB808%26Format=610" class="radius large button details-title-button" data-checkedout="0" data-contentstatus="0">Place a Hold</a> Place a Hold <a href="BANGAuthenticate.dll? Place a Hold <a href="BANGAuthenticate.dll? For Year 7 and above. Audio and visual cues facilitate some of our most powerful sensory experiences and embed themselves deeply into our memories and subconscious. Available Formats- OverDrive Read Adobe EPUB eBook Adobe PDF eBook Due to publisher restrictions, your digital library cannot purchase additional copies of this title.

Description- Audio and visual cues facilitate some of our most powerful sensory experiences and embed themselves deeply into our memories and subconscious. Title Information+ Digital Rights Information+ Blue Man Group - Medley (Melodi Festival 20-02-2010) How Do Woodwind Instruments Work? Something about sound The harmonic series The sound waves going up and down the instrument add up to give a standing wave, a vibration pattern of the air in the instrument. 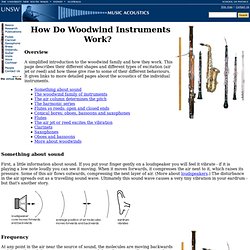 Several different such patterns are possible. On a flute, with all keys down, you can play about seven or eight different notes. Their pitches (approximate) are given below. Encyclopedia Britannica. Wind instruments exhibit great diversity in structure and sonority and have been prominent in the music of all cultures since prehistoric times. 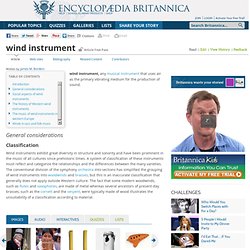 A system of classification of these instruments must reflect and categorize the relationships and the differences between the many varieties. The conventional division of the symphony orchestra into sections has simplified the grouping of wind instruments into woodwinds and brasses, but this is an inaccurate classification that generally does not apply outside Western culture. The fact that some modern woodwinds, such as flutes and saxophones, are made of metal whereas several ancestors of present-day brasses, such as the cornett and the serpent, were typically made of wood illustrates the unsuitability of a classification according to material.

The standard method of instrument classification was introduced in 1914 by Curt Sachs and Erich von Hornbostel. The player of a whistle flute, by contrast, blows through a mouthpiece. Percussion Family. How Percussion Instruments Work - The Method Behind the Music. Percussion instruments are the simplest, and most primitive musical instruments. 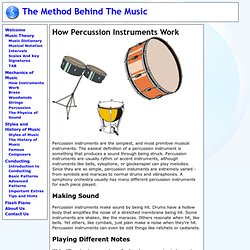 A symphony orchestra usually has many different percussion instruments for each piece played. Philharmonia Orchestra. Drums, cymbals, xylophones, triangles - in fact anything that has to be hit in order to make a sound is included in the percussion section. 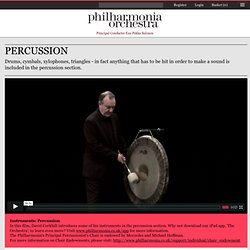 Tambourine. ArtsAlive.ca Music. The instruments of the string section are crafted by carefully carving, shaping and glueing wood pieces together, and covering them with several coats of varnish. 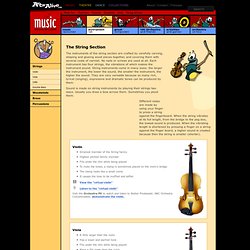 Strings, standing waves and harmonics. The animation shows the interaction of two waves, with equal frequency and magnitude, travelling in opposite directions: blue to the right, green to the left. 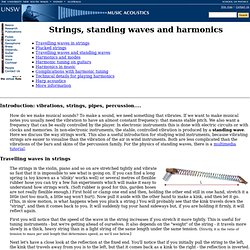 The red line is their sum: the red wave is what happens when the two travelling waves add together (superpose is the technical term). By stopping the animation, you can check that the red wave really is the sum of the two interacting travelling waves. The figure at right is the same diagram represented as a time sequence - time increases from top to bottom. You could think of it as representing a series of photographs of the waves, taken very quickly.

The red wave is what we would actually see in a such photographs. Suppose that the right hand limit is an immoveable wall. At the fixed end they add to give no motion - zero displacement: after all it is this condition of immobility which causes the inverted reflection. String instruments of the orchestra. How Stringed Instruments Work - The Method Behind the Music. Some of the simpler instruments are the string instruments. 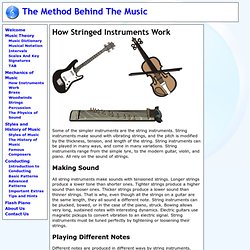 String instruments make sound with vibrating strings, and the pitch is modified by the thickness, tension, and length of the string. String instruments can be played in many ways, and come in many variations. String instruments range from the simple lyre, to the modern guitar, violin, and piano. ATLAS of Plucked Instruments. Encyclopedia Britannica. The equilibrium value of pressure, represented by the evenly spaced lines in Figure 1A and by the axis of the graph in Figure 1C, is equal to the atmospheric pressure that would prevail in the absence of the sound wave. 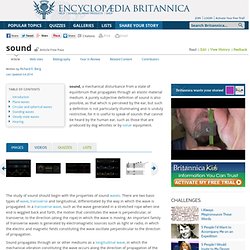 With passage of the compressions and rarefactions that constitute the sound wave, there would occur a fluctuation above and below atmospheric pressure. The magnitude of this fluctuation from equilibrium is known as the amplitude of the sound wave; measured in pascals, or newtons per square metre, it is represented by the letter A. The displacement or disturbance of a plane sound wave can be described mathematically by the general equation for wave motion, which is written in simplified form as: This equation describes a sinusoidal wave that repeats itself after a distance λ moving to the right (+ x) with a velocity given by equation (2). Waves and Sound with animations and film clips: Physclips.

The Physics of Sound - The Method Behind the Music. Traveling Waves Sound is produced when something vibrates. 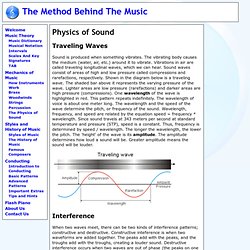 The vibrating body causes the medium (water, air, etc.) around it to vibrate. Vibrations in air are called traveling longitudinal waves, which we can hear. Sound waves consist of areas of high and low pressure called compressions and rarefactions, respectively. Shown in the diagram below is a traveling wave. Interference. Sound is a Pressure Wave. Sound is a mechanical wave that results from the back and forth vibration of the particles of the medium through which the sound wave is moving.

If a sound wave is moving from left to right through air, then particles of air will be displaced both rightward and leftward as the energy of the sound wave passes through it. The motion of the particles is parallel (and anti-parallel) to the direction of the energy transport. This is what characterizes sound waves in air as longitudinal waves. Compressions and Rarefactions A vibrating tuning fork is capable of creating such a longitudinal wave. Sound Waves and Music. Sound and Vibration. It’s a planet of sound!

Sound starts with just a simple vibration. It’s at the heart of everything from One Direction’s latest song to the conversations you have with friends. But how does sound work? Snubby J's Answers to Questions (How To Build a PVC Instrument) Make and Play a Paper Xylophone.