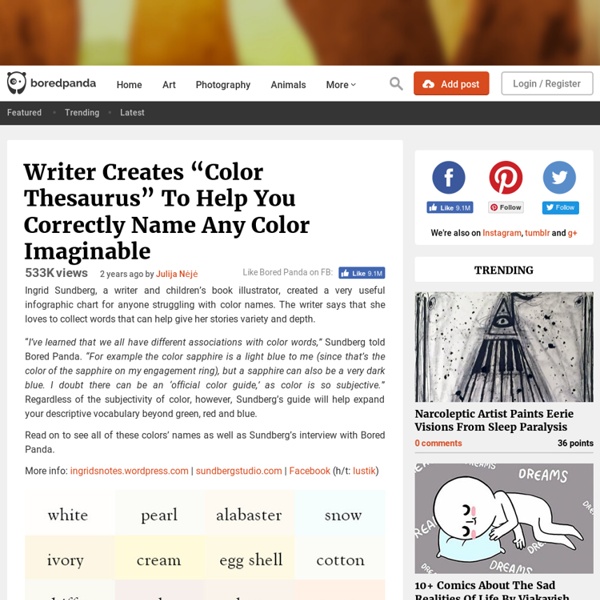 Ingrid Sundberg, a writer and children’s book illustrator, created a very useful infographic chart for anyone struggling with color names. The writer says that she loves to collect words that can help give her stories variety and depth. Show Full Text “I’ve learned that we all have different associations with color words,” Sundberg told Bored Panda. “For example the color sapphire is a light blue to me (since that’s the color of the sapphire on my engagement ring), but a sapphire can also be a very dark blue. I doubt there can be an ‘official color guide,’ as color is so subjective.” Read on to see all of these colors’ names as well as Sundberg’s interview with Bored Panda. More info: ingridsnotes.wordpress.com | sundbergstudio.com | Facebook (h/t: lustik) “There was no official color guide,” Sundberg told Bored Panda. “I use it all the time when I write. “I’ve learned that we all have different associations with color words.

How's Your Color Vision? This Simple Game Will Tell You Most of you have probably spent a considerable amount of time staring at the colors of photos in programs like Photoshop, but how good are your eyes at discerning colors? iGame’s Eye Test is a simple online test that will assess the quality of your color perception through a simple game format. The game works as follows: you’re presented with a grid of colored boxes. The Color Thesaurus I love to collect words. Making word lists can help to find the voice of my story, dig into the emotion of a scene, or create variety. One of my on-going word collections is of colors. I love to stop in the paint section of a hardware store and find new names for red or white or yellow. Having a variety of color names at my fingertips helps me to create specificity in my writing.

12 Letters That Didn't Make the Alphabet You know the alphabet. It’s one of the first things you’re taught in school. But did you know that they’re not teaching you all of the alphabet? 50 Years of "Avengers" Comic Book Covers Through Color Next Colors quantified Each "Avengers" cover was analyzed and reduced to 64 colors (white and black were excluded). These colors were then counted and plotted to generate a palette. The size of each swatch of color represents how much space it occupies on the cover.

7 Beautiful Words With No Direct English Translation You know that feeling you get when surrounded by close friends or family -- perhaps gathered around a fireplace after a meal, or chatting on the couch in your pajamas on a Sunday morning? There truly is no word to describe it. Or at least not in English.

19 amazing English words we've totally forgotten about 1. Twirlblast A tornado, according to people in the 1700s. Why we switched to tornado, I’ll never understand. 2. Humanae (work in progress) — Angélica Dass Humanæ is a “work in progress” by the Brazilian Angélica Dass, who intends to deploy a chromatic range of the different human skin colors. Those who pose are volunteers who have known the project and decide to participate. There is no previous selection of participants and there are no classifications relating to nationality, gender, age, race, social class or religion. Nor is there an explicit intention to finish it on a specific date. It is open in all senses and it will include all those who want to be part of this colossal global mosaic. The only limit would be reached by completing all of the world’s population.

Color Words Colour Terms This list contains 168 definitions of obscure colour terms using combinations of 'normal' colours of the rainbow and descriptive adjectives; e.g. cardinal = deep scarlet red; russet = reddish brown. Note that most English speakers outside the U.S. spell colour with the added British 'u' rather than the American version color. List of Greek words with English derivatives This is an incomplete list of Greek words with derivatives in English. There are many English words of Greek origin, with a variety of histories: vernacular borrowing, typically passing through Latin and French; learned borrowing directly from Greek; coinage in post-classical Latin or modern European languages; and direct borrowings from Modern Greek. The words (or suffixes) are in Greek alphabetic order, with tables for the 24 Greek letters, listing thousands of related English words. Transliteration[edit] There are considerable differences between the various transliterations used to represent the Greek alphabet in English. The table in the sidebar shows:

Origins Of Popular Jewish Surnames Correction, Jan. 29, 2014: Some of the sources used in the reporting of this piece were unreliable and resulted in a number of untruths and inaccuracies. The original post remains below, but a follow-up post outlining the errors, as well as further explanation, can be found here. Ashkenazic Jews were among the last Europeans to take family names. Some German-speaking Jews took last names as early as the 17th century, but the overwhelming majority of Jews lived in Eastern Europe and did not take last names until compelled to do so.

List of English words of Spanish origin It is a list of English language words whose origin can be traced to the Spanish language as "Spanish loan words". Many of them are identical in other Romance languages (mainly Portuguese or Italian), but their passage into English is believed to be through Spanish. Most these words came to English from Castilian and American Spanish dialects, which in turn got them from various sources including English ("turista"). However many of the words contained in the list are not used by native English speakers today. For example native English speakers use the term 'goodbye' rather than 'adios' as incorrectly stated below. A[edit]

Animal Adjectives Animal Adjectives While there are other forms of adjectives for animals, by far the greater majority of such words end in -ine; thus the following list deals excusively with this type. The -ine suffix comes from the Latin -inus and forms terms meaning 'of or relating to' or 'of the nature of'. Some of these words are sometimes even used in reference to people: how often have you heard of a woman moving with feline grace, for instance? Unusual Words Web crawl data from Common Crawl. Unusual Words A by no means exhaustive list of rare, obscure, strange and sometimes funny words and their meanings that only seem to crop up in crosswords and dictionaries. 11 Little-Known Words for Specific Family Members The words we use for family members in English are specific about some things, and vague about others. Our vocabulary marks a distinction between our mother and her sisters (some languages use one word for mother and maternal aunts), but doesn't say whether siblings are older or younger (some languages have different words for brother and sister depending on their age relative to you). We lack words that pick out particular family members (we have "cousin," but what about child-of-my-father's-brother?) as well as certain general terms (we have "siblings" for brothers-and-sisters, but what about nieces-and-nephews?) If you look hard enough, you can find some words to help fill in the gaps. Here are 11 unusual English kinship words for family members.