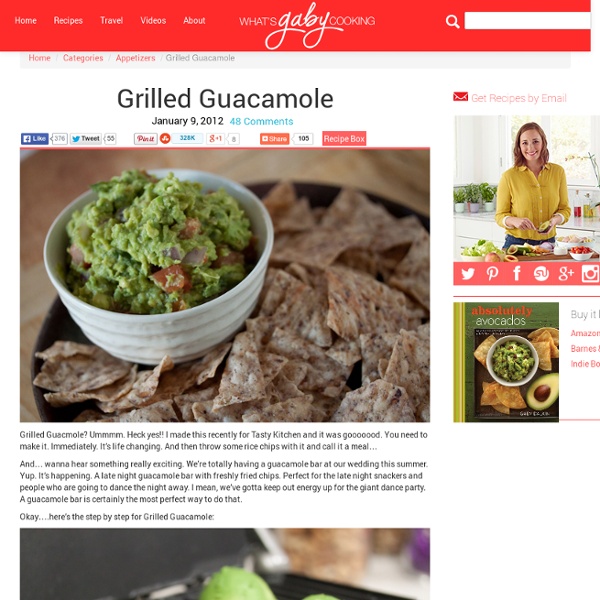 Grilled Guacmole? Ummmm. Heck yes!! I made this recently for Tasty Kitchen and it was gooooood. You need to make it. Immediately. And… wanna hear something really exciting. Okay….here’s the step by step for Grilled Guacamole: You need to prepare either your indoor or outdoor grill. Once the avocados have some grill marks, throw a few slices of red onion on the grill to char. Next up, let’s grill some tomato quarters! Once we’ve got everything grilled and set aside, place the avocado into a bowl and give it a quick mash. Next, grate some garlic over the avocado. Be sure to get all that fabulous garlic from the bottom side of your grater. Next, juice a lime or two over the avocado. Add the chopped red onion. And then the tomatoes! Throw in some chopped cilantro. Season the guac with some salt and a few turns of freshly cracked black pepper. And serve it up with some of your favorite chips!! Check out Tasty Kitchen for the full recipe of Grilled Guacamole!

The HostelBookers Blog - StumbleUpon – Written by Victoria Philpott Not quite had your fill of breakfasts just yet? Check out our beautifully visual list of the 30 best breakfasts from around the world. Plan your next culinary adventure or just get a little adventurous with breakfast at the weekend. Salivating. How to make homemade manicotti On one of the first trips to my in-laws, before Lou and I were married, my mother-in-law-to-be Rita Cinquino served manicotti. I had never, ever tasted anything so good before. And as much as I loved my husband back then, I have to say the manicotti might have sealed the deal. It certainly was a major factor in my lifetime commitment to him. She served it with soft, squishy, white garlic bread too. It’s a bit of an effort to make, but so worth it.

The Comfort of Eggs in a Basket Eggs in a basket was the first meal I ever cooked. I was in 5th grade, and it was a Sunday morning at my best friend's house after a sleepover. We woke up hungry, and for some reason his parents weren't home. This confused me--my parents would never do that--but more important than confusion was the fact that I was terribly hungry, and I didn't see how that problem was going to be solved, since his house never had any cereal in it. "We'll make eggs in a basket," my friend said, pulling out a loaf of bread, a jug of oil, and a carton of eggs. You mean, we'll be cooking? Triple Chocolate Oreo Oatmeal Cookies Let’s talk cookies, mmmmk? I like cookies. Duh. We know this. Nate loves cookies. Baked Egg Boat recipe Breakfast is my favorite meal. I like to drink iced coffee and watch the cream climb its way down the chunky ice cubes in a dazy before the caffeine hits. I like to order bacon with whatever I’m eating. I like eating potatoes with ketchup. I like eggs over easy, and fluffy scrambled eggs.

untitled From the molten yolk and bacon crunch of a hand-held breakfast, to the gooey charm of grilled cheese for lunch, nothing matches the simple pleasures of well-made sandwiches. They're quick to assemble, infinitely adaptable, easy to eat, and immediately satisfying—the very definition of good food. The 25 sandwiches you're about to meet can be thrown together during the average basketball halftime or, with practice, during the seventh-inning stretch. Vegetarian Cold Sesame Noodles March 11, 2014 Cold Sesame Noodles Serves 2 to 3 Adapted from Saveur Ingredients: ½ lb whole wheat spaghetti, cooked al dente, according to package directions (soba noodles also work, but I find they have a slightly bitter after-taste that’s distracting) – $2.19 4 Tablespoons sesame oil, divided – stock 2 Tablespoons low-sodium soy sauce – stock 1 […]

Jalapeno Popper Dog Jalapenos seem to be monstrous at the grocery store compared to their size from a few years back. I used this large size to my advantage, and was able to case a whole hot dog and some cheese inside a couple of cut jalapenos. The fun thing about this recipe is that you could make a whole dozen of them easily, pop em into a zip lock, and head out to your nearest B.Y.O.M. party (Bring Your Own Meat), camp fire, or other communal grilling situation.

Cinnamon Toast&Rolls - Circle B Kitchen - Circle B Kitchen - StumbleUpon The USDA released its new food pyramid the other day (which is actually a plate now instead of a pyramid), and I am sorely disappointed to report that cinnamon rolls did not appear anywhere on that plate. I think by now most of us know what should be on our dinner plate in terms of healthy, well-rounded nutrient-laden meals, but it is my considered opinion that our breakfast plate should include cinnamon rolls now and then. And not just any cinnamon roll, mind you, but how ‘bout a homemade cinnamon roll hybrid that is a cross between a cinnamon roll and cinnamon toast, is super easy to make and gosh darn delicious.