40 maps that explain the Roman Empire 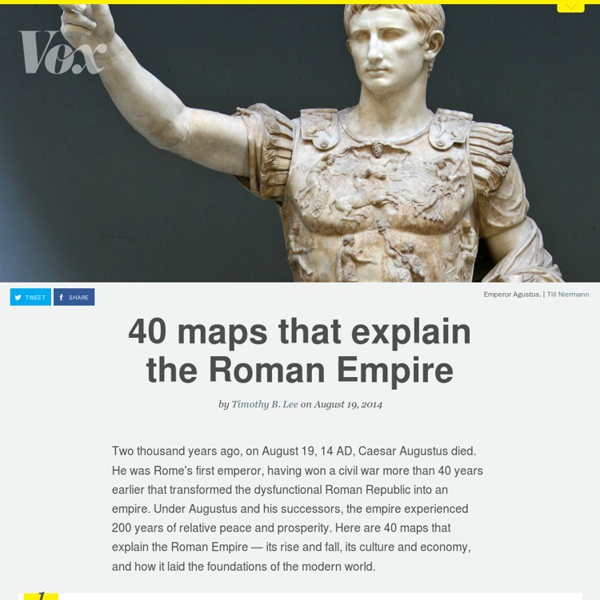 by Timothy B. Lee on August 19, 2014 Two thousand years ago, on August 19, 14 AD, Caesar Augustus died. He was Rome's first emperor, having won a civil war more than 40 years earlier that transformed the dysfunctional Roman Republic into an empire. Under Augustus and his successors, the empire experienced 200 years of relative peace and prosperity. Here are 40 maps that explain the Roman Empire — its rise and fall, its culture and economy, and how it laid the foundations of the modern world. The rise and fall of Rome The rise and fall of RomeIn 500 BC, Rome was a minor city-state on the Italian peninsula. The rise of Rome Rome's military Rome's powerful maniple formation Rome's powerful maniple formationIn the early years of the republic, the Roman infantry used a version of the Greek phalanx. The republic becomes an empire The lost city of Pompeii The eruption of Mount Vesuvius The eruption of Mt. The culture of Rome Roman Britain and the Roman economy The decline of Rome Rome's legacy

KateMonk This is a collection of names from around the world which was initially intended to help provide character names for live role-players. It includes short historical backgrounds, male and female first names or personal names, and surnames or family names, from many countries and periods. The author is not an expert in onomastics or history so would like to apologise if any mistakes have been made. All names included are from genuine sources to the best of her knowledge, but this is not an academic study and should not be relied upon by re-enactment societies which require specific dates and instances of occurrence for the names they use. Top 10 Myths About the Romans History For many, the only exposure to Ancient Rome comes from what they have seen in the movies or on television. Unfortunately, films like Gladiator, Spartacus, Barabbas, and Demetrius and the Gladiators don’t present a very accurate depiction of life in Rome and the arena. Considering the fact that the Roman Empire existed for so long, and so much of our own Western society has derived from it, it is no surprise that we all have at least one or two misconceptions about the Empire and its people.

Mapping Strabo's Geographica Recently Google Maps Mania reviewed the Hestia Project's Herodotus Timemap. Herodotus, sometimes known as the Father of History, was a fifth century Greek historian. In his 'Histories' Herodotus recounts the origins of the Great War between the Greeks and Persians and the rise of the Persian Empire. 40 Maps That Explain The Middle East Maps can be a powerful tool for understanding the world, particularly the Middle East, a place in many ways shaped by changing political borders and demographics. Here are 40 maps crucial for understanding the Middle East — its history, its present, and some of the most important stories in the region today. Middle East History

A Five-Minute Guide to Medieval Fabrics By Danièle Cybulskie I don’t know about you, but I often read descriptions of medieval clothing and want to know more about the fabric: what did it look like and what was its texture? Read on for a brief overview, and part of the fantastic glossary of terms from Fashion in the Middle Ages that will give you a sense of medieval fabric and some great trivia (such as where the word “crimson” comes from). When it comes to medieval clothing, Europeans got by on five major components: leather, linen, wool, silk, and fur.

Forgotten Nations History Rome annihilated Carthage to ensure it would never again rise as a major threat. The Ottomans forever ended Byzantium’s glory. The vast armies of Persia were repeatedly beaten back by the Greeks, subjugated by the might of Alexander, and destroyed by the rise of Islam. Ancient Rome for Kids: The Colosseum History >> Ancient Rome The Colosseum is a giant amphitheatre in the center of Rome, Italy. It was built during the Roman Empire. When was it built? Construction on the Colosseum was started in 72 AD by the emperor Vespasian.

10 must see ancient greek temples HeritageDaily Back in Ancient Greece the temple was the most important building. The first temples to be constructed from stone began to appear in the 6th century. The Greek temples were not used as places of worship, but rather as monuments to their beloved gods and goddesses. Some of the best examples of Greek temples standing today are located not only in Greece, but in what would have been their ancient empire that stretched to various other locations including Italy, which is home to some of the most well-preserved Greek temples.

Collections View the exclusive collection of items excavated at Vindolanda. An Archeological Journey People come in their thousands to Vindolanda as it is a ‘live’ archaeological site. For the last forty five years the site has been surrendering its thousand year old secrets on a daily basis. No other Roman site in Britain is as rich in its findings.

Iran Through Ages (726 BC to 640 AD) Ancient Iran through Ages (728BCE to CE651) Medes / Median (Mâdhâ) Dynasty; 728-550BCE Achaemenid (Hakhâmaneshiyân) Dynasty; 550-330BCE Parthian /Arsacid (Ashkâniân) Dynasty; 247BCE-CE224 Sasanid / Sasanian (Sâsâniân) Dynasty; CE224-640 Modern Iran Pantheon, Rooma, virtuaalisesti Panorama from the inside of the Pantheon. This is a hand held panorama taken early in the day in the Pantheon, one of the top tourist attractions in Rome which rapidly fills with people by the hundreds. The best time to see the Pantheon is early in the morning when you can absorb and contemplate this fantastic building in relative silence.

10 must see roman sites across the world HeritageDaily The Roman era is one of the most well known among today’s civilization, it is an era of history that is taught at the majority of schools and was so widespread that you can visit many different parts of the world and still manage to stumble upon some Roman ruins. Listed are some of the most majestic and dominating Roman structures that still stand today that cannot be missed. 1 Palmyra