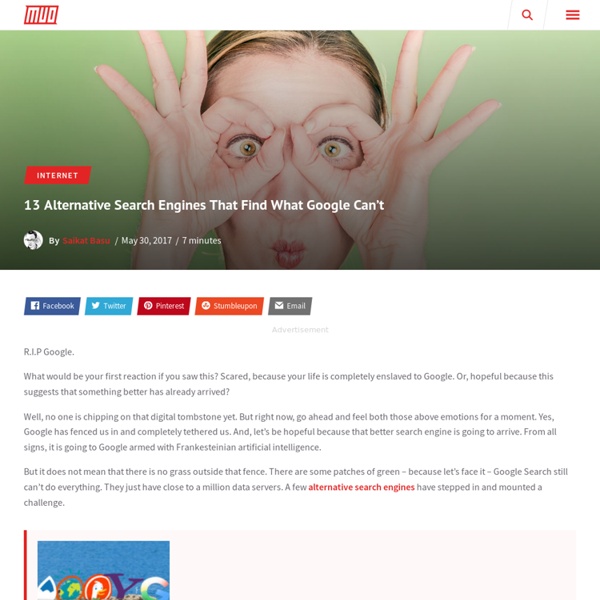 Advertisement R.I.P Google. What would be your first reaction if you saw this? Scared, because your life is completely enslaved to Google. Or, hopeful because this suggests that something better has already arrived? Well, no one is chipping on that digital tombstone yet. But it does not mean that there is no grass outside that fence. These Search Engines Do What Google (Still) Can’t Some are worthy contenders for the second-place medallion while some are just go into those niche corners of the web. 1. Google does good for the world in its own way. Read through their FAQ where they open up about the project and also show you the progress of their planting programs. 2. Open your bag of privacy tools to add Qwant to the collection of no-tracking search engines. Even when you are connected with an ID, we don’t use any cookie nor any other tracking device when you browse the site. Local storage on your machine is used to save your settings and data. 3. 4. 5. 6. Let’s talk about kids. 7. 8. 10.

Innovation: Shrewd search engines know what you want - tech - 09 July 2010 Read full article Continue reading page |1|2 For better or worse, search engines have become the gateway to the web. They help users to find information, advertisers to sell products – they even help hackers in their shady pursuits. So they are also the focus of intense research to variously help or hinder those parties. Top Ten Best Visualization Tools for Social Media, Blogosphere, Internet & News 4- Fidg't Fidg't is a desktop application that allows you to view your social networks tagging habits. You can check out what kind of music your network is into, or what kind of photos they are sharing. Their 'Visualizer' tool shows how your network compares to a random sampling of the networks of other Fidg't users, letting you see how your network stacks up to others?

The 10 Best TED Talks of 2011 Watching videos online is usually considered fun, but generally a waste of time. Not so with TED videos, which are uniformly interesting, educational, inspiring, and enjoyable. If you haven't spent much time (or any) checking out TED videos, you should – and to help with that, I've compiled what seem to be the very best 10 TED videos of 2011. 5 Powerful Ways To Google People From Alternative Search Engines The verb “to google” was officially added to the Merriam Webster Collegiate Dictionary and the Oxford English Dictionary in 2006. As the Official Google Blog clarifies the trademark, it should only be strictly used when you use Google to search. But that doesn’t stop us from using alternative search engines to search for people, does it? Let’s look at 5 alternative search engines that work better than Google when you are searching for people online.

Top 6 Underground Search Engines You Never Knew About Advertisement I love Google, Bing and Yahoo just as much as the next Internet user, but sometimes you really want to dig down into a particular subject. In order to do that, you really need access to those underground search engines that may not be quite as well known, but they dig much more deeply into specialized areas of the Internet than the general search engines are capable of. 3 Free Tools to Help You Nail Your Next Presentation Let’s face it. Solid, dynamic, well-planned and creatively executed presentations are what really sell ideas. Whether you are preparing for a meeting with a potential investor or pitching your service to a prospect, taking the time to create a memorable presentation can tip you over the edge to success. Unfortunately, as entrepreneurs, there are two factors that always seem to get in the way of developing presentations that generate tremendous results: time and money.

Viral videos Richard has appeared in countless television and radio programmes, including ABC’s 20/20, NBC’s Dateline, BBC Radio 4′s The Today Programme, and BBC2′s The Culture Show. In addition, he has devised bespoke studies for several television programmes, including National Geographic’s Brain Games 2 and The History Channel’s Your Bleeped Up Brain. Richard has created more viral videos than anyone else in the UK. His Quirkology YouTube channel has over 1 million subscribers and received over 200 million views, and he has created online content for Derren Brown’s The Events, the launch of CBS’s The Mentalist, and Transport For London. We have produced a DVD containing high quality versions of many of the videos from the Quirkology channel, and this is used in training seminars and college lessons across the world.

10 Search Engines to Explore the Invisible Web Not everything on the web will show up in a list of search results on Google or Bing; there are lots of places that their web crawlers cannot access. To explore the invisible web, you need to use specialist search engines. Here are our top 12 services to perform a deep internet search.

Siri and Wolfram: friends with benefits - Nerdcam - Blogs Loading... Please wait. Once you've found out what the weather's like in Ukraine, and asked what the meaning of life is, Apple's Siri assistant can seem pretty useless — doubly so, if you're in Australia. But if you team it up with Wolfram Alpha, you can get some nice results to questions with substance. Because Siri still bears the dreaded "beta" tag, it's missing some key functionality for the Australian market, including compatibility with the Maps application, and the all-important business search, to name a few. It's perhaps for this reason that Siri has been seen as little more than a novelty so far.

Enabling Windows GodMode Microsoft Windows Vista (32-bit version) introduced a new hidden feature called GodMode that allows you to view and adjust all settings within Windows. To create a shortcut to the GodMode in Windows Vista (32-bit) or any version of Windows 7 follow the steps below. Anywhere on your computer create a new folder. After the folder has been created, copy the below text, rename that folder, and paste the text as the file name. GodMode.{ED7BA470-8E54-465E-825C-99712043E01C}