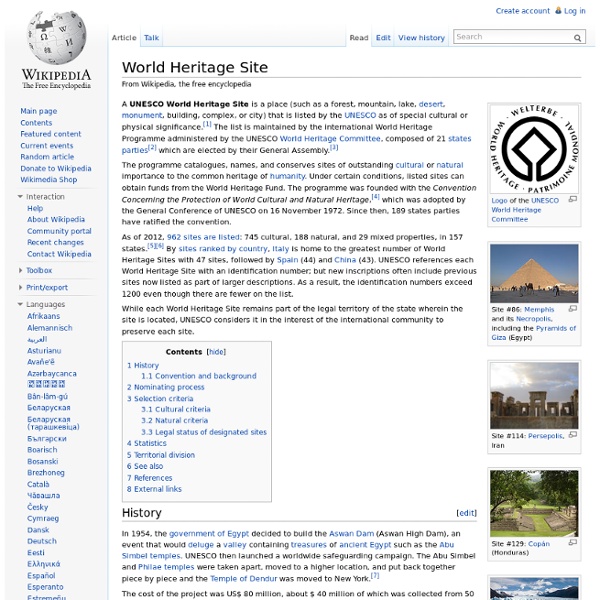 A UNESCO World Heritage Site is a place (such as a forest, mountain, lake, island, desert, monument, building, complex, or city) that is listed by UNESCO as of special cultural or physical significance.[1] The list is maintained by the international World Heritage Programme administered by the UNESCO World Heritage Committee, composed of 21 states' parties[2] which are elected by their General Assembly.[3] The programme catalogues, names, and conserves sites of outstanding cultural or natural importance to the common heritage of humanity. Under certain conditions, listed sites can obtain funds from the World Heritage Fund. The programme was founded with the Convention Concerning the Protection of the World Cultural and Natural Heritage,[4] which was adopted by the General Conference of UNESCO on 16 November 1972. History[edit] The cost of the project was US$80 million, about $40 million of which was collected from 50 countries. Convention and background[edit] Nominating process[edit] Related:  Deep Time • History of Science • AusAID

Home | Polonsky Foundation Digitization Project Howard Florey Howard Florey, Baron Florey of Adelaide OM FRS FRCP[1] (24 September 1898 – 21 February 1968) was an Australian pharmacologist and pathologist who shared the Nobel Prize in Physiology or Medicine in 1945 with Sir Ernst Boris Chain and Sir Alexander Fleming for his role in the making of penicillin. Although Fleming received most of the credit for the discovery of penicillin, it was really Florey who carried out the first ever clinical trials in 1941 of penicillin at the Radcliffe Infirmary in Oxford on the first patient, a Postmaster from Wolvercote near Oxford. The patient started to recover but unfortunately subsequently died because Florey had not made enough penicillin. Florey's discoveries are estimated to have saved over 82 million lives.[3] Florey is regarded by the Australian scientific and medical community as one of its greatest scientists. Biography[edit] Flasks used in the cultivation of penicillin mould for large-scale production. Honours and awards[edit] References[edit]

About Us - About ASAE Who We Are ASAE represents more than 21,000 association executives and industry partners representing 10,000 organizations. Our members manage leading trade associations, individual membership societies and voluntary organizations across the United States and in nearly 50 countries around the world. With support of the ASAE Foundation, a separate nonprofit entity, ASAE is the premier source of learning, knowledge and future-oriented research for the association and nonprofit profession, and provides resources, education, ideas and advocacy to enhance the power and performance of the association and nonprofit community. We believe associations have the power to transform society for the better. Our passion is to help association professionals achieve previously unimaginable levels of performance. Meet the ASAE Board Read the ASAE Bylaws Read the ASAE Foundation Bylaws Our Cause ASAE helps associations and association professionals transform society through the power of collaboration.

Department for International Development The Department for International Development (DFID) is a United Kingdom government department with a Cabinet Minister in charge. It was separated from the Foreign and Commonwealth Office in 1997. The goal of the department is "to promote sustainable development and eliminate world poverty". DFID's main programme areas of work are Education, Health, Social Services, Water Supply and Sanitation, Government and Civil Society, Economic Sector (including Infrastructure, Production Sectors and Developing Planning), Environment Protection, Research, and Humanitarian Assistance. In 2009/10 DFID’s Gross Public Expenditure on Development was £6.65bn. In June 2013 as part of the 2013 Spending Round outcomes it was announced that DFID's total programme budget would increase to £10.3bn in 2014/15 and £11.1bn in 2015/16 to help meet the UK government's commitment to spend 0.7% of GNI (Gross National Income) on ODA (Official Development Assistance). Ministers[edit] The DFID Ministers are as follows:[7]

Steve Jobs quotes: the man in his own words | Technology Steve Jobs, Apple co-founder and technological visionary, was well known for his words as well as his creations. Here are some of his thoughts over the past 25 years. On life "Remembering that I'll be dead soon is the most important tool I've ever encountered to help me make the big choices in life. Because almost everything - all external expectations, all pride, all fear of embarrassment or failure - these things just fall away in the face of death, leaving only what is truly important. On Macintosh "I don't think I've ever worked so hard on something, but working on Macintosh was the neatest experience of my life. "When we finally presented it at the shareholders' meeting, everyone in the auditorium stood up and gave it a 5-minute ovation. On customers On technology "We think the Mac will sell zillions, but we didn't build the Mac for anybody else. On motivation "That's been one of my mantras — focus and simplicity. On money On internet start-ups On design (1) "Design is a funny word.

The World’s First Eyewitness? | Doug's Darkworld I’ve written about the first photograph of a human being, here is another old photograph that has historical significance in an obscure way. The fine gentleman above is Conrad Heyer, this picture was taken circa 1852. He was approximately 103 when photographed, having been born in 1749. He was reportedly the first white child born in Waldoboro, Maine, then a German immigrant community. Conrad’s life sounds sounds like an historical footnote for sure, but this is not a Revolutionary War post, and isn’t what I find of interest in this particular photograph. What was the world like during Conrad’s youth? The world population was under eight hundred million in 1749, most of these in Asia and Europe. Though safe from Indian attack, the 1750s was not a safe decade in Maine, bordering as it did on a hostile French Canada. In nearby Maine these events would certainly have been news, but one must remember that in this era news took weeks to travel. Old Conrad lived through it all. Like this:

The Great Library at Alexandria was destroyed by budget cuts, not fire That's fair; I don't know if libraries influenced the innovations in your example, whether directly through scholastic research or indirectly by influencing the development of the minds of the innovators. It does seem unlikely, doesn't it, given the popular impression of what the medieval period was like? I recall reading a book about technological innovation in the medieval period long ago, but I'm sad to say I can't remember anything that might help us here. I wouldn't argue that libraries are singularly required for research, education or innovation, just that they are uniquely helpful (but even there I'd grant that there are exceptions—there are always exceptions). I don't, however, think that a thing needs to have been responsible for everything to justify its existence. My impression is that you are suggesting there is probably more progress done outside scholastic centers than inside. I also haven't chastised the guy with the swords.