30 Ways To Promote Creativity in Your Classroom 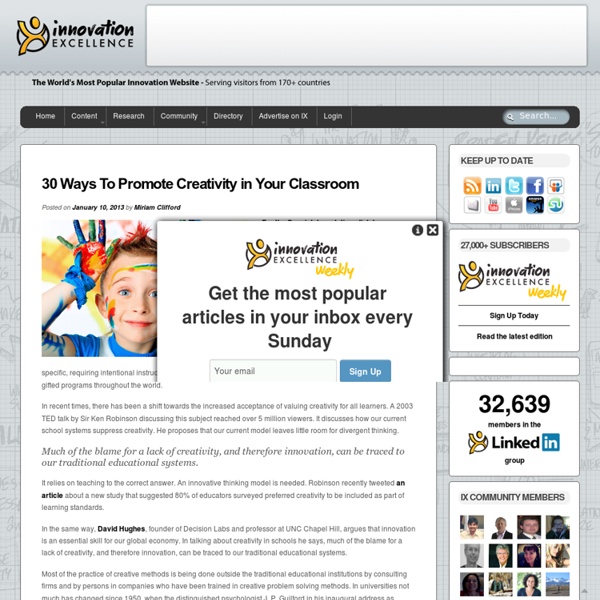 Consensus on Climate Still Means Consensus - Next time someone tells you there isn’t a scientific consensus on man’s role in climate change, trot out this new study. But acknowledge its source…. An article of faith in the climate warming community is that a “scientific consensus” exists on humanity’s role in raising the planet’s temperature. An equal and opposite article of faith among global warming skeptics (to check their temperature scroll down the comments section on any mainstream media article about climate change), or at least skeptics of anthropogenic climate change, is that this consensus is at best less than sweeping and at worst illusory. A new study published online today in the journal Environmental Research Letters puts a figure on how real this (genuine) scientific consensus is. I see value in continuing to hammer home that the scientific establishment has reached a consensus that people are warming the planet (and perhaps that people can cool it down).

5 Terrible Ideas That Solved Huge Global Problems The ability to think outside the box is a valuable skill that tends to bring its possessor fame and fortune. But there's a fine line to be balanced -- if you think too far outside the box, the best you can hope for is that your padded cell is somewhat clean. Yet sometimes, the most far-fetched, cartoonish ideas are the ones that work best. All it takes is the right idea and the ability to convince somebody to spend lots of money trying it. #5. The Plan: Nearly every city in the world wishes it could flip a magic switch that would cut down on crime, and only one city has a switch that turns on the Bat Signal. psychcentralThat's the sign for robot prostitutes. Yeah, right. How It Worked: Oh, wait, it totally did. And piped in some smooth jazz. Next, the Tokyo railroad decided to get in on the blue-light action, though the problem they wanted to solve wasn't so much the crime. Seriously? Getty"I just can't leave a world that invented The Smurfs." There are several theories. #4. #3. See? Right.

Students take on world's challenges For high schoolers, 20 years might as well be a lifetime. But hand them a problem that experts say threatens the entire planet if not solved in the next two decades, and they'll simply get to work. Perhaps the most hopeful sign for the rest of us: They'll have fun while they're at it. Subscribe Today to the Monitor Click Here for your FREE 30 DAYS ofThe Christian Science MonitorWeekly Digital Edition A prime example was an ebullient group of teenage girls, a whirl of blue jeans and saris amid hundreds of teachers and students gathered for a conference recently in Boston. That's the topic they selected as participants in a new initiative called Challenge 20/20. "In most private schools, they've been feeding students a line about 'global citizenship' for a long time. The US-India team finally narrowed its focus to the need for sanitary medical supplies, particularly in two villages "adopted" by the Indian students. But the personal connections are what motivated it all. 1. 6. 13.